The violent death throes of a nearby star so thoroughly disrupted its planetary system that the dead star left behind — known as a white dwarf — is sucking in debris from both the system’s inner and outer reaches, UCLA astronomers and colleagues report today.

This is the first case of cosmic cannibalism in which astronomers have observed a white dwarf consuming both rocky-metallic material, likely from a nearby asteroid, and icy material, presumed to be from a body similar to those found in the Kuiper belt at the fringe of our own solar system.

“We have never seen both of these kinds of objects accreting onto a white dwarf at the same time,” said lead researcher Ted Johnson, a physics and astronomy major at UCLA who graduated last week. “By studying these white dwarfs, we hope to gain a better understanding of planetary systems that are still intact.”

The findings are based on an analysis of materials captured by the atmosphere of G238-44, a white dwarf some 86 light-years from Earth, using archival data from the Hubble Space Telescope and additional NASA satellites and observatories. A white dwarf is the burned-out core that remains after a star like our sun sheds its outer layers and stops burning fuel through nuclear fusion.

As surprising as the white dwarf’s wide-ranging diet is, the findings are also intriguing because astronomers believe icy objects crashed into and irrigated dry, rocky planets in our solar system — including Earth. Billions of years ago, comets and asteroids are thought to have delivered water to our planet, sparking the conditions necessary for life. The makeup of the material detected raining onto G238-44 implies that icy reservoirs might be common among planetary systems, said research co-author Benjamin Zuckerman, a UCLA professor of physics and astronomy.

“Life as we know it requires a rocky planet covered with a variety of volatile elements like carbon, nitrogen and oxygen,” Zuckerman said. “The abundances of the elements we see on this white dwarf appear to have come from both a rocky parent body and a volatile-rich parent body — the first example we’ve found among studies of hundreds of white dwarfs.”

Chaos and destruction: From living star to red giant to white dwarf

Theories of planetary-system evolution describe the demise of a star as a turbulent, chaotic event, one that begins when it first balloons exponentially into what is known as a red giant and then quickly loses its outer layers, collapsing into a white dwarf — a super-dense star about the size of Earth, with a mass of our sun. The process dramatically disrupts the remaining planets’ orbits, and smaller objects — asteroids, comets, moons — that venture too close to them can be scattered like pinballs and sent hurtling toward the white dwarf.

This study confirms the true scale of the chaos, showing that within 100 million years after the beginning of its white dwarf phase, the star is able to simultaneously capture and consume material from its nearby asteroid belt and its far-flung Kuiper belt–like regions. 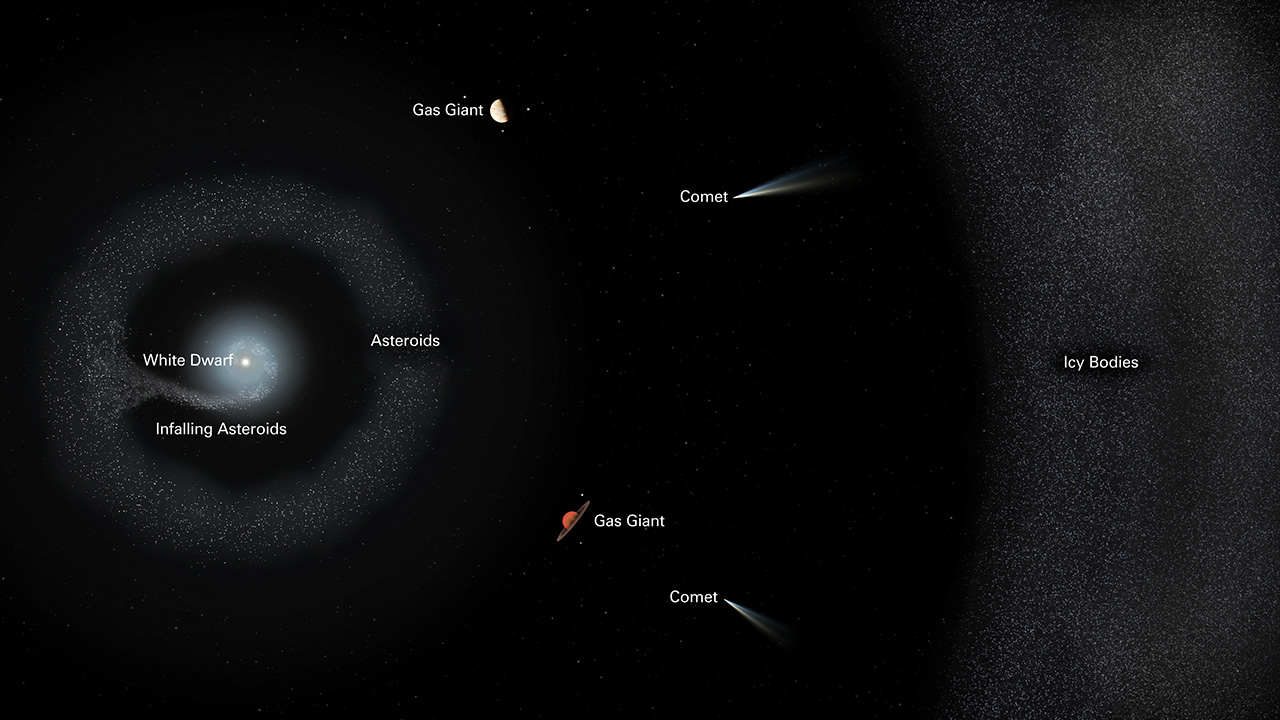 NASA, ESA, Joseph Olmsted (STScI)
Diagram illustrates the slow destruction of G238-44’s planetary system, with the tiny white dwarf at the center, surrounded by a faint accretion disk made up of pieces of shattered bodies falling onto the dead star. Remaining asteroids form a thin stream of material surrounding the star. Larger gas giant planets may still exist in the system, and much farther out is a belt of icy bodies such as comets.

Though astronomers have cataloged more than 5,000 planets outside our solar system, the only planet whose interior makeup we have some direct knowledge of is Earth. Because the materials accreting onto G238-44 are representative of the building blocks of major planets, this white dwarf cannibalism provides a unique opportunity to take planets apart and see what they were made of when they first formed around the star, said UCLA astronomy researcher Beth Klein, a member of the team.

The team measured the presence of nitrogen, oxygen, magnesium, silicon and iron, among other elements, in the white dwarf’s atmosphere. Their detection of iron in very high abundance is evidence for metallic cores of terrestrial planets, like Earth, Venus, Mars and Mercury, Johnson said. Unexpectedly high nitrogen abundances led them to conclude that icy bodies were also present.

“The best fit for our data was a nearly two-to-one mix of Mercury-like material and comet-like material, which is made up of ice and dust,” Johnson said. “Iron metal and nitrogen ice each suggest wildly different conditions of planetary formation. There is no known solar system object with so much of both.”

The researchers say the ultimate scenario for our own sun some 5 billion years from now will likely be quite similar to what has been seen with G238-44. During the sun’s red giant phase, the Earth might be completely vaporized along with the inner planets, they predict.

The orbits of many of the asteroids in our solar system’s main asteroid belt will be gravitationally perturbed by Jupiter and will also fall onto the white dwarf remnant that the sun will become, he said.

For more than two years, the research group at UCLA, along with colleagues at UC San Diego and the University of Kiel in Germany, has worked to unravel the mystery of G238-44 by analyzing the elements detected on the white dwarf star.

The team’s results were presented at an American Astronomical Society press conference on June 15. 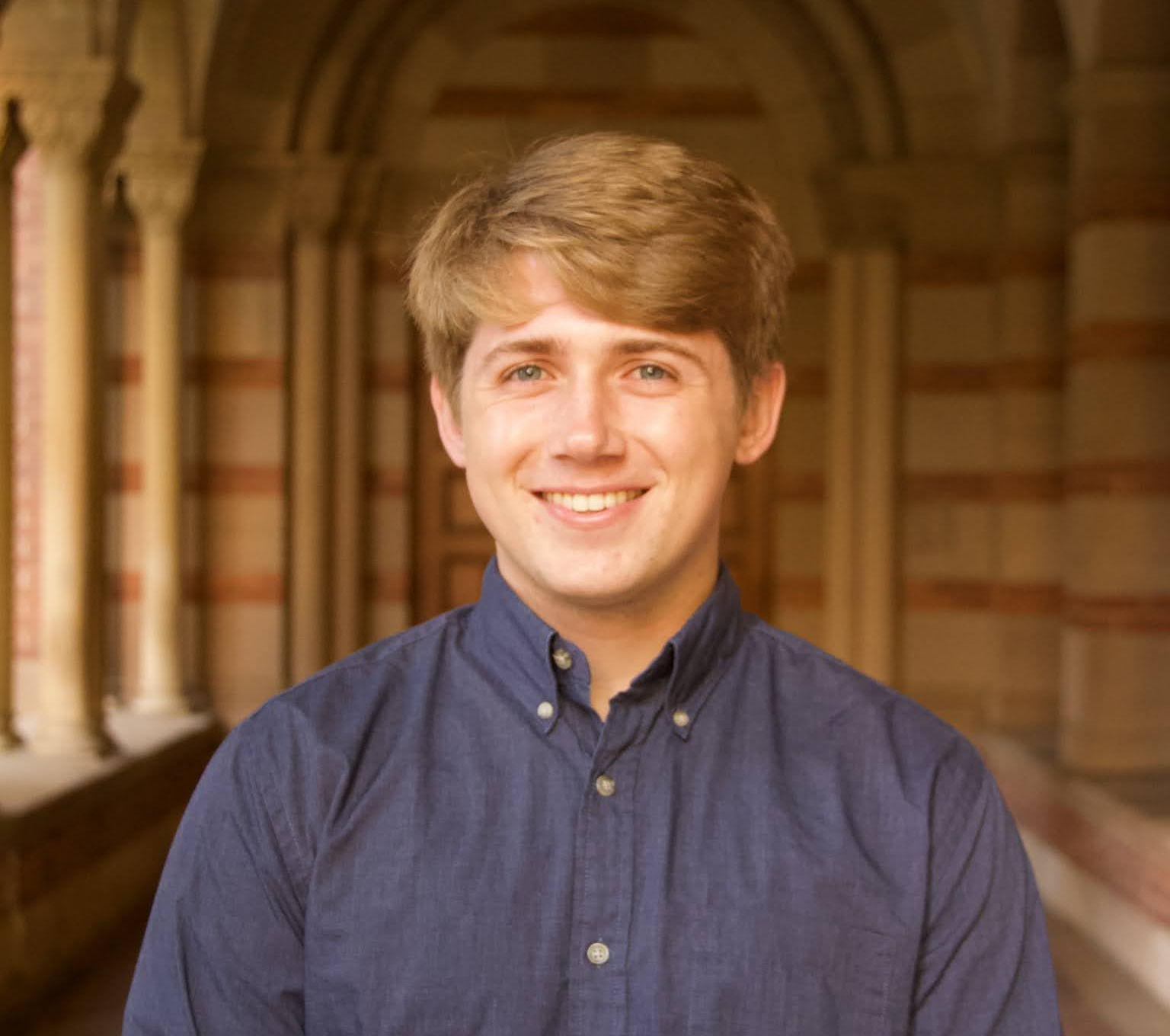 “Conducting research as an undergraduate was the single most important thing I could do at UCLA,” said lead researcher Ted Johnson, whose work was supported during his senior year by the UCLA Undergraduate Research Scholars Program. “It has shown me that a career in research is something I want to continue to pursue. I am a completely different scientist now than I was when I started this project two years ago. I knew so little back then.”

Johnson credited his research group, and in particular the “exceptional mentorship” of UCLA researcher Beth Klein, with his development as an astronomer during the course of his undergraduate career.

“I was very lucky to have found a research group that had so much time for its undergraduates,” he said. “Everyone in our group wanted us undergrads to be the best scientists we could be. In group meetings, they are always ready to give feedback and suggestions on our work and were always extremely constructive. We have an amazing community here at UCLA, and I am grateful for the time I was able to spend on this campus.”

Klein said that Johnson was “one of the best students I have ever had the privilege to teach and work with” — a sentiment echoed by Johnson’s co-author and UCLA professor Benjamin Zuckerman.

“It has been a special pleasure for me as a longtime astronomer to be associated with this exciting research project led by Ted, who is an outstanding undergraduate,” he said.

Johnson, who graduated June 10, has now accepted a position as a full-time predoctoral research assistant at NASA’s Goddard Space Flight Center and will be applying to graduate programs in astronomy.