In a report card published today, more than a dozen UCLA researchers and students take the full measure of Los Angeles County’s land use, biodiversity and looming environmental threats — and those factors’ impact on residents’ health and well-being.

“Everyone sees Los Angeles as a concrete jungle, and in the urban space it certainly can be,” said Cassie Rauser, executive director of the UCLA Sustainable LA Grand Challenge, which has a goal of applying the university’s research, expertise and education to help transform Los Angeles into the world’s most sustainable megacity by 2050. “But that’s not how it has to be.”

Rauser said Los Angeles has a realistic opportunity to thrive as a megacity while also achieving a balanced and healthy ecosystem that ensures every Angeleno has equitable access to nature and the health benefits it provides — including shade, clean air and clean water.

For its overall performance in those areas and more, Los Angeles County received a C+ grade from the Sustainable LA Grand Challenge Ecosystem Health Report Card.

The authors chose that mark because although the county does have some progressive policies with defined targets, it still has a long way to go to achieving those goals. Rauser said the researchers hope community partners and government officials will use the report card as the basis for continued progress, and that they will collaborate with UCLA to improve the grade.

Mas Dojiri, assistant general manager of Los Angeles Sanitation and Environment, said the report would be valuable to the region’s policymakers.

“The great part of the environmental report card is that everybody can understand those letter grades,” he said. “UCLA’s report shows that we’re not horrible, but we’re average and we still have a long way to go. And now we have to come together as a society to move forward.”

The report card assigns individual grades to the county’s performance in each of four areas, and it includes recommendations for policies and actions to improve Los Angeles’ environmental health and its residents’ well-being. A look at each of the categories:

Land use and habitat quality: C/Incomplete

The study found that 64.6% of county land is natural area, but only 50.6% of that natural land is protected from development. The authors consider the grade “incomplete” because of a lack of data on habitat connectivity, habitat quality and habitat protection.

Los Angeles County is home to more than 4,200 native plants and animals, of which 38 are considered endangered and 12 considered threatened. Of those at-risk species, 18 have seen increases in their populations since 2000, another 18 have been stable and 12 have seen decreases. (Data for the other at-risk species are unavailable.)

“Los Angeles County has more federally endangered species than any other county in the United States outside of Hawaii,” said Thomas Gillespie, a UCLA professor of geography and contributor to the report. “We sometimes forget that in Los Angeles we have a lot of biodiversity and a lot of endangered species.”

In one analysis for the report card, Gillespie, UCLA graduate student Monica Dimson and several UCLA undergraduate students found that many unprotected habitats near the Santa Clara River are home to three or four endangered species.

Los Angeles County is more vulnerable to both natural and human-driven threats than ever before. For example, the report found that approximately 21% of the county’s land — where 2 million residents currently live — is categorized as having a “very high” hazard for wildfire. The report recommends halting development completely in those zones.

The authors also considered the effects of invasive plant and animal species, nighttime light pollution and the ongoing loss of vegetative greenness, among other topics. 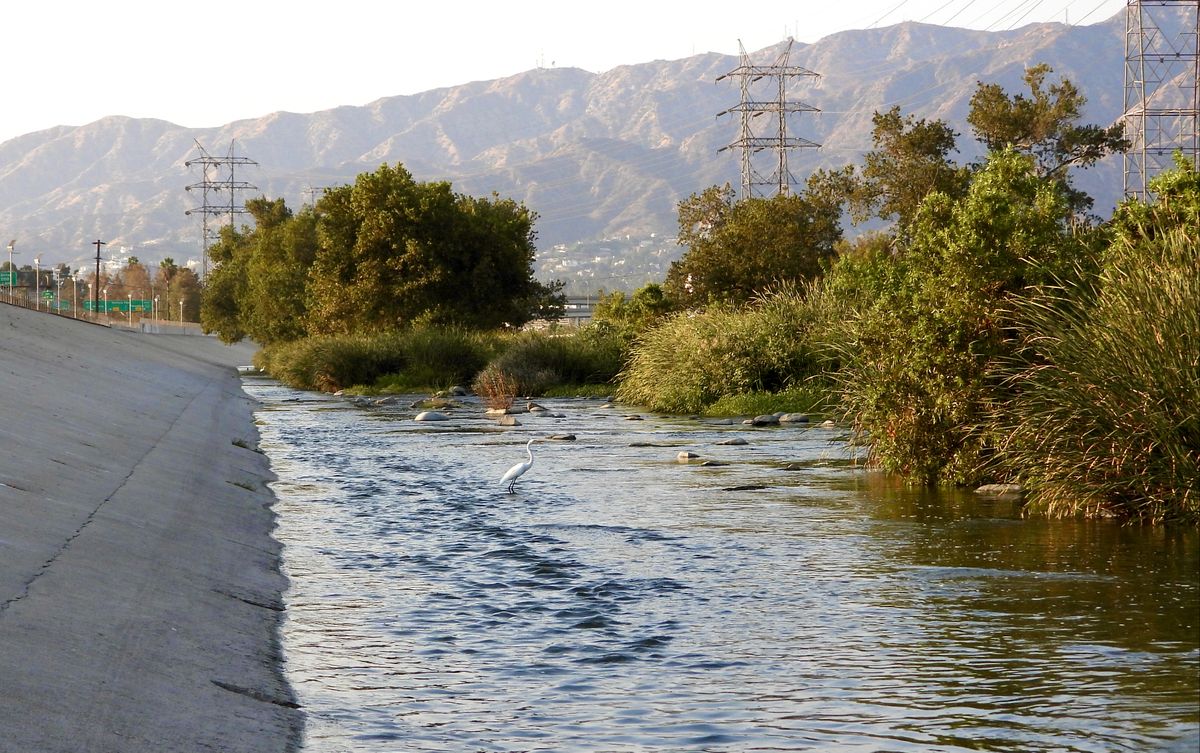 Nurit Katz/UCLA
The report recommends restricting development within 100 feet of the county’s channelized rivers and streams.

In 2018, for example, 13 out of every 100,000 county residents had a heat-related health issue necessitating an emergency department visit — compared to five out of every 100,000 in 2005. Living in a community with trees that provide natural shade can help combat those issues, but according to the report card, only 49% of county residents live within a half-mile of a park or outdoor recreation space. And only 20% of the county’s urban footprint is covered by tree canopy.

The authors write that the county should design parks that reflect the needs and values of its communities while prioritizing native biodiversity, and that public funds should be allocated to plant more native trees in areas with the greatest needs first.

Ryan Harrigan, a UCLA associate adjunct professor and member of the UCLA Institute of Environment and Sustainability, said the report card should serve as a starting point for evaluating the success of regional initiatives over the next several years.

“It establishes baselines and methodology so students and other researchers, five or 10 years down the road, can really assess how the environment and community has changed,” said Harrigan, who contributed to the report. “We don’t typically get that in the sciences.”