A study by UCLA researchers reveals the cellular basis for how the hormone estrogen protects against damage to the central nervous system in women with multiple sclerosis, or MS. The researchers found that estrogen treatment exerts positive effects on two types of cells during disease — immune cells in the brain as well as cells called oligodendrocytes. 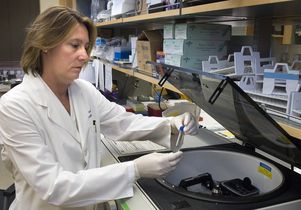 Multiple sclerosis is a chronic autoimmune, neurodegenerative disease marked by visual impairment, weakness and sensory loss, as well as cognitive decline. These symptoms emerge when inflammatory immune cells destroy the myelin sheath that surrounds nerve cells, known as axons, and that acts as a form of protective insulation for those cells.

The third trimester of pregnancy previously has been shown to reduce relapse rates by about 70 percent as compared to before pregnancy, and other studies have shown benefit over the long term due to multiple pregnancies. An estrogen unique to pregnancy that is made by the fetus and placenta has been proposed by Dr. Rhonda Voskuhl and colleagues to mediate this pregnancy protection in both the MS mouse model as well as in two successfully completed clinical trials of estriol treatment in women with MS.

How that happens has remained a critical question. Voskuhl reported mouse studies showing that estrogen protected the brain from damage by activating a protein called estrogen receptor beta. Her new research identifies which cells within the brain are mediating this protective effect.

Using female mice genetically engineered to show MS symptoms, the researchers first eliminated the estrogen receptor beta in either immune cells of the brain or in oligodendrocytes, the cells that make the myelin sheath, as a way of making those particular cells unresponsive to estrogen. They then treated mice without or with the estrogen receptor beta in these cells to learn if disease protection was lost or not. Loss of protection during treatment meant that the treatment was acting on the cell that had the receptor removed. Results showed that the estrogen-like treatment was acting on both immune cells of the brain as well as on oligodendrocytes, together resulting in myelin repair and reduced disability.

Drug developers often optimize therapies by targeting one single cell type. By contrast, this study confirms that this estrogen-like compound can combat MS via complementary effects on two distinct cell types. Voskuhl and other UCLA researchers are now developing a next-generation estrogen-like compound with robust biochemical effects on oligodendrocytes and immune cells in the brain.

Voskuhl, who is a professor of neurology and directs UCLA’s Multiple Sclerosis Program, is the study’s senior author. Others include first author Roy Kim, a graduate student in Voskuhl’s lab; Darian Mangu, Alexandria Hoffman, Rojan Kovash and Eunice Jung — all UCLA undergraduates; and Noriko Itoh. All are of the department of neurology at UCLA’s David Geffen School of Medicine.

The study was published online in Brain on Dec. 8 and appears in the January print issue.

The research was supported by funds from the National Institutes of Health and by grants from the Conrad Hilton Foundation, the California Community Foundation and the Tom Sherak MS Hope Foundation.