Richard Turco, the founding director of the UCLA Institute of the Environment and Sustainability, and his wife, Linda Turco, have pledged $1.5 million to the institute to establish an endowment for the support of undergraduate and graduate students.

The couple’s gift commitment has been augmented by $750,000 from the UCLA dean of physical sciences’ gift matching program, bringing the total to $2.25 million.

“Thanks in large part to the dedication and pioneering efforts of Richard Turco, the Institute of the Environment and Sustainability has evolved to become a real force for environmental truth and equity,” said the institute’s current director, Marilyn Raphael. “And now we add our deep gratitude for the Turcos’ generous gift commitment, which will provide the resources to effectively recruit, retain and empower generations of students eager to become change agents in the service of a sustainable environment.”

The initial gift funds will be contributed over the next five years, with the deferred balance coming from the couple’s estate. When fully funded, the endowment will support an annual lecture, publication awards and fellowships for graduate students, and research awards for undergraduates, with priority given to first-generation students and those with demonstrated financial need.

Richard Turco is a distinguished professor emeritus at UCLA and former chair of the university’s department of atmospheric and oceanic sciences. An atmospheric chemist, he joined UCLA’s faculty in 1988 and built a multidisciplinary research group focused on pressing environmental problems, including ozone depletion, urban air pollution and the impact of aerosols on climate. Those efforts eventually led to the establishment of the Institute of the Environment and Sustainability in 1997, which Turco oversaw until 2003. He retired from UCLA in 2011.

The Turcos’ pledge is the latest major donation the couple has made to UCLA. In 2017, they established an endowment to fund fellowships for outstanding graduate students in their third and fourth years of study in the department of atmospheric and oceanic studies — vitally important years in a doctoral student’s academic career. A portion of that endowment also supports an award for research papers published in scientific journals by graduate students or postdoctoral scholars. A 2019 gift from the couple established the first endowed faculty chair in the department’s history.

“The future of human civilization will best be served by education — at all levels, in all places — and the world’s great universities will be called on to provide an unshakable foundation for global progress, equity and prosperity,” Richard Turco said. “With this in mind, those, like myself, who have benefited most from past access to education should be among the most willing to support future access for others, with generosity and hope.”

Miguel García-Garibay, dean of the UCLA Division of Physical Sciences, which houses the Institute of the Environment and Sustainability, lauded the Turcos’ ongoing support for students and faculty in the environmental sciences.

“Richard and Linda Turco have set a shining example of giving back, for which we are immensely grateful,” García-Garibay said. “Not only has Richard been instrumental in building UCLA’s excellence in researching environmental solutions, but he and Linda have chosen to establish a lasting legacy of financial support for this area, helping to ensure the institute’s impact for years to come.”

The building blocks of the Institute of the Environment and Sustainability 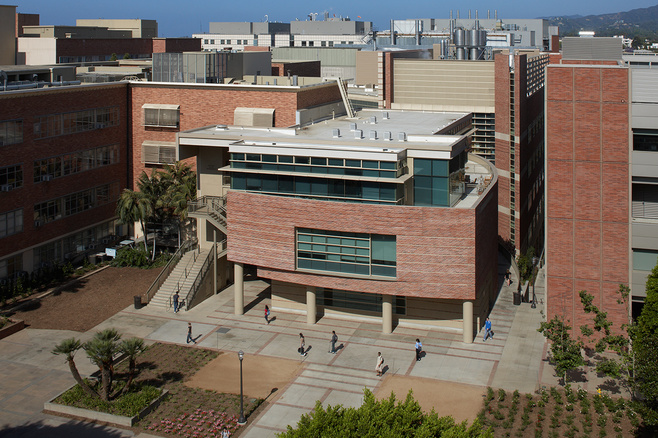 As the head of the department of atmospheric and oceanic sciences and a member of UCLA’s Institute of Geophysics and Planetary Physics in the 1990s, Richard Turco was well placed to tackle the challenges of what at the time was called “global change” — the planetary-scale environmental issues beginning to take center stage internationally.

Together with a group of like-minded faculty members from academic departments across campus, he organized a multidisciplinary research program to study the growing risks posed by ozone depletion, climate warming and other hazards. Turco and his colleagues felt strongly that a top research university like UCLA could — and should — take a lead role in the quest to understand and mitigate such existential threats to civilization.

Turco spearheaded several early projects, including a large-scale research study of the Los Angeles Basin watershed and the establishment of a geographic information system, or GIS, data processing lab. In 1997, the program officially became the UCLA Institute of the Environment and Sustainability, which has since grown into broad and powerful agent in the service of a sustainable environment.

During Turco’s tenure as director (1997–2003), the institute moved into the newly built La Kretz Hall (above). The building, funded by a donation from UCLA alumnus and longtime sustainability supporter Morton La Kretz, was the first on campus to receive LEED, or Leadership in Energy and Design, certification by the U.S. Green Building Council.