UCLA researchers examining how the 101 Freeway affects animal populations in Los Angeles found a surprisingly large amount of genetic diversity within groups of individual species separated by the massive thoroughfare.

The study, published in Conservation Biology, focused on seven species — from side-blotched lizards to grey foxes — that were selected as representatives of local wildlife. Researchers knew the 101 acted as a major barrier between northern and southern populations of these animals, but they didn’t expect to find so much genetic variation within species groups on both sides of the freeway.

“To better comprehend how wildlife will respond to climate change, it is important to look at ecosystems as a whole in addition to zeroing in on specific species,” said Tom Smith, a professor of ecology and evolutionary biology at UCLA and director of the Center for Tropical Research. The Mediterranean landscape of Los Angeles — ranging from desert to forest — allows more species to co-exist comfortably.

About 80 percent of animals’ genetic makeup is based on their environments, said co-author Ryan Harrigan, assistant adjunct professor in the UCLA Institute of the Environment and Sustainability and an assistant researcher in the Center for Tropical Research at UCLA.

For the study, the researchers mapped the genes of the seven species. To get genetic material, UCLA partnered with the National Park Service, which collected skin, blood and toe pad samples. Researchers extracted DNA from the samples and examined populations of individual species using a machine that can detect even small genetic variations.

They cross-referenced the genetic information with environmental variables like temperature, elevation and vegetation to look for patterns. 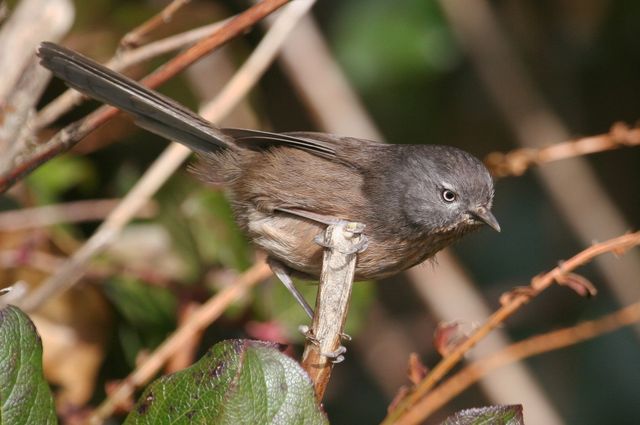 planephotoman/Wikimedia Commons
Wrentits feed on insects in chaparral, the dense low brush that grows along the Pacific seaboard.

By capturing a small, environmentally diverse area of the Santa Monica Mountains, you can discover 70 to 80 percent of the genetic variation in a species native to that area, Harrigan said. Knowing how animals respond to changes in temperature or elevation tells scientists how the animals could react to climate change, which is expected to raise temperatures and make extreme weather more common.

The paper identifies areas with the largest number of species and most genetic diversity within individual species. These are the areas most important to conserve, Harrigan said.

If our planet warms 2 degrees Celsius by the turn of the century, as predicted by many climate scientists, wildlife will have limited options, Harrigan said. The easiest solution for many will probably be to move up the mountains to cooler territory. But once they get to the top, there’s nowhere to go. Some populations will likely go extinct, while others may adapt to the new reality.

Some species are better suited to adaptation than others, and a lot of that has to do with their diet.

“Pigeons will eat almost anything. Crows will eat a lot of different things. And the same goes for mammals like coyotes,” Harrigan said. “Specialists focused on one particular seed, or where 80 percent of their diet comes from a particular item, are going to fare much worse. There’s not really a lot of other landscapes or environments those species can move to.”