Molecular machines, much smaller than single cells, may one day be able to deliver drugs to kill cancer cells or patrol your body for signs of disease. But many applications of these machines require large arrays of rock-hard moving parts, which would be difficult to build with typical biological structures.

Molecules that makes up the solid crystals found in nature are generally so tightly packed together that there’s no room for any of them to move. So despite their strength and durability, solid crystals have generally not been considered for applications in molecular machines, which must have moving parts that can respond to stimuli.

Now, UCLA researchers have formed a crystal out of molecules that resemble gyroscopes with solid frames. Since each molecule has an exterior case surrounding a rotating axis, the crystal has a solid exterior but contains moving parts.

The new crystal, described in the journal Proceedings of the National Academy of Sciences, is the first proof that a single material can be both static and moving, or amphidynamic. 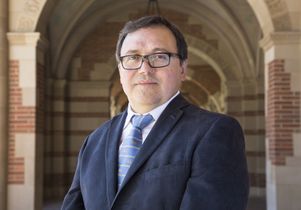 “For the first time, we have a crystalline solid with elements that can move as fast inside the crystal as they would in outer space,” said Miguel García-Garibay, a UCLA professor of chemistry and biochemistry and senior author of the study.

To create repetitive arrays of molecular machines, or smart materials, researchers have often turned to liquid crystals, which are engineered to use in LCD television screens but also are found in nature. But liquid crystals are relatively slow: Each molecule must entirely change orientation to alter how it interacts with light, to change color or show a new image on a screen, for instance.

García-Garibay and colleagues set out to design a crystalline solid with faster-moving parts. As a starting point, they considered larger, everyday objects that they might be able to replicate at a microscopic scale.

“Two objects we found to be very interesting were compasses and gyroscopes,” said García-Garibay, who also is dean of physical sciences in the UCLA College. “We began to create large-scale models; I literally ordered a few hundred toy compasses and started building structures out of them.”

There were two keys to mimicking a compass or gyroscope at a smaller scale, the researchers found. First, the structure’s exterior case had to be strong enough to maintain its shape around mostly empty space. Second, the interior rotating component had to be as close to spherical as possible.

After some trial and error, the team designed a structure that worked: a metallo-organic case containing both metal ions and a carbon backbone surrounding a spherical molecule called bicyclooctane. In experiments, the resulting compound — 1,4-bicyclo[2.2.2]octane dicarboxylic acid, a metal-organic framework that the researchers called BODCA-MOF — behaved as an amphidynamic material.

Not only that, but computer simulations of the crystal confirmed what the experiments were showing: the constantly-spinning BODCA spheres were each rotating at up to 50 billion rotations per second, as fast as they would have in empty space, whether they were rotating clockwise or counterclockwise. 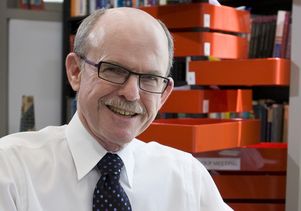 “We were able to use the equations of physics to validate the motions that were occurring in this structure,” said Kendall Houk, UCLA’s Saul Winstein Professor of Organic Chemistry and one of the paper’s authors. “It’s an amazing discovery that you can have extremely rapid motions inside this thing that externally is like a rock.”

Having proven that such a compound can exist, the researchers now plan to try introducing new properties into BODCA-MOF that would allow an electric, magnetic or chemical stimulus to alter the molecules’ motion.

“The ultimate goal is to be able to control motion in these molecular machines so that we can create materials that respond to external stimuli,” García-Garibay said. That could lead to faster computer and electronic displays, he added, or technologies that interact with radar, sonar or chemicals.

“With such low barriers for rotation, the results mark substantial progress toward freely rotating molecular components embedded in a crystalline matrix, and toward potential functionality,” said Stuart Brown, a UCLA professor of physics and astronomy, and another author of the paper.

The study’s other authors are Cortnie Vogelsberg, a former graduate student, and Song Yang, a current graduate student, both in UCLA’s chemistry and biochemistry department; Fernando Uribe-Romo of the University of Central Florida; and Andrew Lipton of Pacific Northwest National Laboratory.

Funding for the study was provided by the National Science Foundation.