When tides are at their highest a few days after a full or new moon, thousands of small silver fish called grunion flop onto Southern California beaches. Females wriggle their tails into the sand, males spray the females with sperm, and the fertilized eggs are deposited below the beach surface. The entire affair lasts no more than a minute or two.

Ten days later, the eggs hatch and baby grunions are washed out to sea.

Artificial light is known to disrupt mating cycles in species like the grunion — as well as disorient insects and upset predator-prey relationships — along the Southern California coast. With those harmful effects of artificial light in mind, a team of UCLA and University of Southern California researchers led by Travis Longcore, UCLA adjunct professor of urban conservation biology, have mapped light pollution conditions at hundreds of locations along the coast that they will use to inform decision-making for future infrastructure and construction plans.

A database of their findings is described in a new paper in the journal Environmental Research Communications. Because the database combines ground-level measurements with satellite data, it is one of the world’s most accurate databases of light pollution.

In the past 100 years, artificial light has become so intense and widespread that most people living near cities have never experienced completely dark skies. But light pollution disrupts feeding, mating and sleeping patterns in many species, including humans.

The challenge for researchers is that satellite imagery — the technology that has traditionally been used to study light intensity at ground level — hasn’t been thought to be totally accurate or precise. For one thing, a single pixel on a satellite image can cover a large area on the ground — approximately 500,000 square meters (about 124 acres). And clouds can cause light to scatter and as it travels from earth to space, which can distort the satellite readings.

To check the accuracy of satellite measurements, Longcore and his colleagues developed a technique to measure artificial light on the Southern California coast. Using specially designed software that quantifies the amount of light in each picture, the researchers took photos of the night sky at 515 locations along the coast. They used a specialized hemispheric camera lens — similar to a fisheye lens — to capture the entirety of the sky in each photo. Then the team compared their on-the-ground measurements of light at night with satellite data.

They were surprised to find that many of the satellite measurements, despite being imprecise because of poor image resolution, were accurate.

“We related the amount of light that escapes up with the amount of exposure on the ground,” Longcore said. “And the two correlated very highly.”

But for more local projects, a detailed database of light pollution will be extremely helpful, especially in regions like Los Angeles County, whose 75-mile coastline is home to several threatened species. If a restaurant on the beach applied to install spotlights illuminating the ocean, for example, local officials would have a resource that could help determine how the added light could affect ecosystems and wildlife. 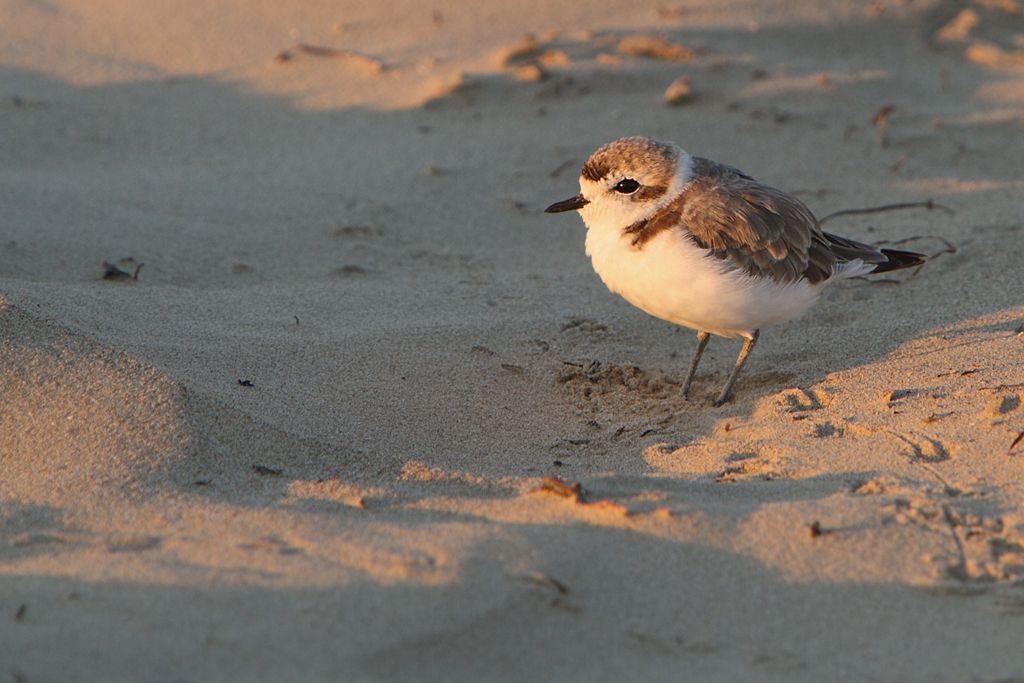 Mike Baird/Flickr
Artificial light makes it difficult for snowy plovers, a threatened species, to find beaches that are dark enough to safely lay their eggs.

Aside from grunion, artificial light causes problems for an array of other species: It distracts moths from pollinating plants; tricks newly hatched sea turtles into heading inland, rather than to the ocean; and makes it difficult for snowy plovers, a threatened species, to find beaches that are dark enough to safely lay their eggs.

Fortunately, the grunion have a group of citizen scientists on their side. A team of Grunion Greeters, as they call themselves, watch over the fish as they spawn each spring. They prevent other onlookers and visitors from creating excessive noise or using bright light.

“Grunion are endemic native fish, found only on the coast of California and Baja California,” said Karen Marin, a biology professor at Pepperdine University who founded Grunion.org, which led to the formation of the Gruinion Greeters. “They are forage fish in the food web for marine mammals, seabirds, sharks, larger fishes and anything that can catch them.”

But Grunion Greeters alone won’t mitigate the effects of artificial light on all of Southern California’s coastal endangered species. That’s where Longcore’s study comes in.

“It’s going to be the largest database of ground-based whole-sky light pollution measures,” Longcore said. “We’ll use this data to investigate ecological phenomena on the ground to directly influence the policies people have for management of light conditions.”

Longcore’s next project will use the light pollution database to help the California Department of Transportation assess the possible effects of installing more energy-efficient highway lighting on Southern California wildlife.