UCLA scholars are launching an ambitious initiative to create one of the nation’s most diverse collections of materials related to policing and incarceration. The effort will collect, digitize and preserve a sustainable archive of data, testimonies, artifacts and police files for the next generation of research on racial and social justice.

“Archiving the Age of Mass Incarceration” is being funded in part by a three-year, $3.65 million grant from The Andrew W. Mellon Foundation, and it will bring together expertise from the UCLA Institute of American Cultures’ four ethnic studies centers and their established connections to local advocacy groups.

The project builds off of the work of the award-winning UCLA-based Million Dollar Hoods research project, a community-driven initiative that began in 2016 to map the fiscal and human cost of mass incarceration in Los Angeles.

The collection will include new oral histories documenting Angelenos’ experiences with law enforcement and incarceration, as well as stories of survival and protest practices. Other materials collected from the community, such as bail bond receipts, mix tapes and poster art, will provide meaningful counterpoints to official police and criminal justice statistics.

UCLA’s ethnic studies centers — the Ralph J. Bunche Center for African American Studies, the Asian American Studies Center, American Indian Studies Center and the Chicano Studies Research Center — were established in 1969. With a shared mandate to support research that advances social and racial justice, the centers have a combined total of more than 250 faculty members affiliated with them, one of the nation’s largest concentrations of racial justice scholars.

“This new collaboration between Million Dollar Hoods and UCLA’s ethnic studies centers will preserve the documentary evidence of mass incarceration and its impact on people’s lives in Los Angeles while building a new digital bedrock for racial justice scholars and scholarship at UCLA,” said Kelly Lytle Hernández, director of the Bunche Center and a 2019 recipient of the MacArthur Fellowship, commonly referred to as the “genius grant.”

Led by Lytle Hernández, Million Dollar Hoods has advanced efforts to shrink public funding for policing and jails in Los Angeles and to reallocate those resources to community-based systems of care.

“This vital and significant effort will expand our knowledge of mass incarceration, connect the academy and impacted communities in a deep, meaningful effort to tell a more detailed and complete story about policing and race, and make the findings and insights gleaned from these crucial archival materials broadly accessible to the public,” said Elizabeth Alexander, president of The Andrew W. Mellon Foundation.

“Our country has the highest incarceration rate in the world, and the Archiving the Age of Mass Incarceration project will ensure both that oral histories and ephemera provide alternative narratives to police statistics about crime, and that the materials of our profoundly unjust criminal legal system are studied and preserved.”

Reaching across communities of color

One of the project’s first initiatives will digitally preserve a cache of Los Angeles Police Department records documenting a wide range of issues, ranging from on-the-ground enforcement of the war on drugs to entanglements between the police and immigration control. Lytle Hernández won access to those records in a legal settlement with the LAPD and was able to bring the records to UCLA with legal guidance from UCLA Library, which also provided access to a secure, climate-controlled location for the files.

“Without the UCLA Library, we would not have those records,” Lytle Hernández said.

A key element of the overall project will be that it encompasses research across several communities of color. That breadth will be critical to improving public awareness of Los Angeles as the epicenter of mass incarceration in the U.S., and it will highlight various ways in which biracial and people of color are disproportionately affected.

For example, Los Angeles is home to the nation’s largest urban population of American Indian people, and Native people are often misidentified or undercounted in studies of policing practices. That effectively erases them from the conversation about the effects of mass incarceration.

“Establishing this archive will not only help us better reckon with and redress this reality, but also illuminate the survival of Indigenous people and acknowledge their continued presence in and contribution to our communities,” said Shannon Speed, director of the UCLA American Indian Studies Center.

As part of the project, UCLA scholars plan to make the archive available to the public by the end of the three-year grant period. The Mellon Foundation funding will enable UCLA to build a digital platform to be shared across the ethnic studies centers; that platform will both create the permanent home for the archive and build the centers’ capacity to maintain a wide range of digital collections focused on racial justice.

“The new platform will catapult our centers into the digital future in knowledge-sharing and knowledge production,” said Karen Umemoto, director of the UCLA Asian American Studies Center. 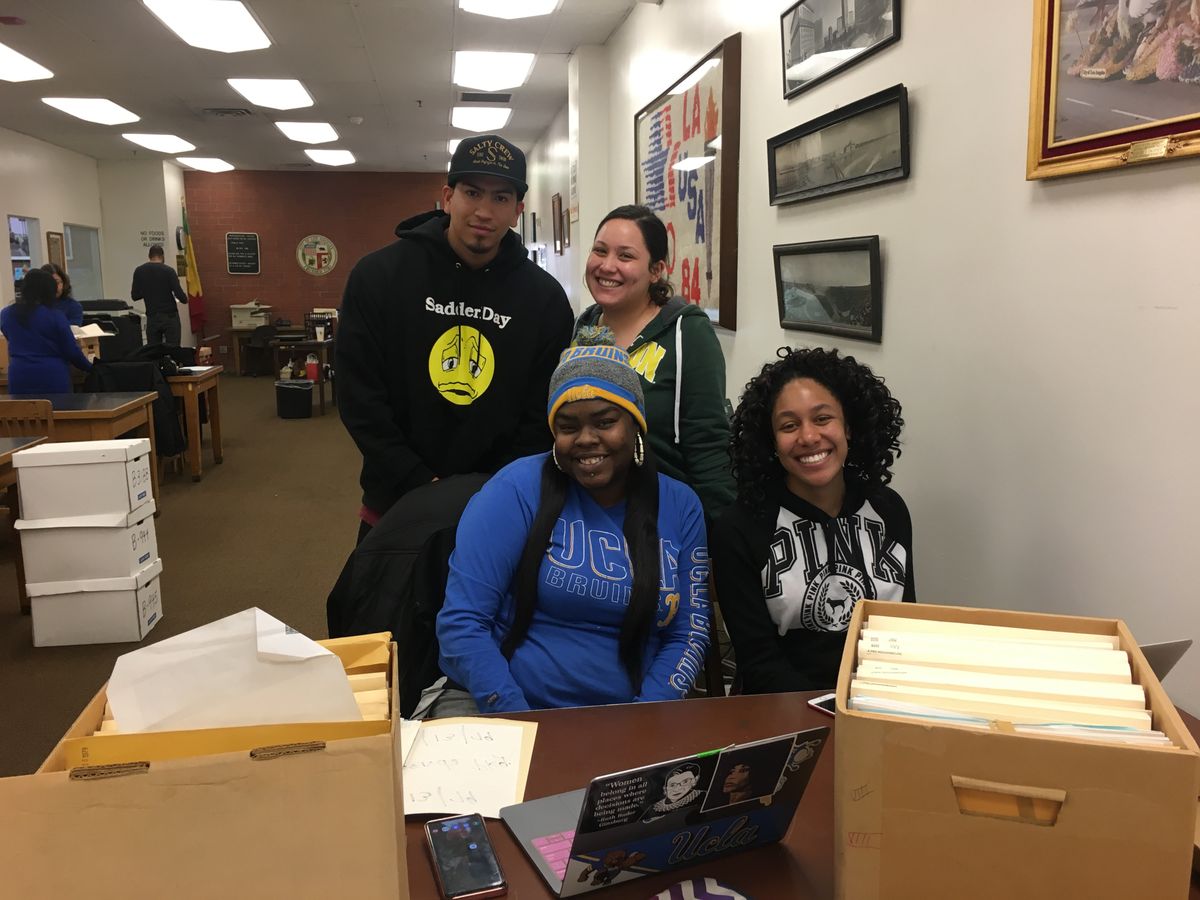 Kelly Lytle Hernández/UCLA
The grant will provide new support for UCLA students learning to develop and preserve archival collections for other researchers and the public.

Million Dollar Hoods, the ethnic studies centers and experts from the community who regularly work with the public will train UCLA students to work with digital archives.

“Students will get hands-on experience in how both institutional and community-based archival collections are preserved, described and made accessible to the public,” said Chon Noriega, director of the Chicano Studies Research Center. “They’ll be on the front lines of helping make this history visible.”

With the grant, the Mellon Foundation becomes the first major foundation to fund a collaboration across all four of UCLA’s ethnic studies centers since 1969, when a grant from the Ford Foundation supported their establishment.

“We are grateful for the support of the Mellon Foundation and the UCLA administration to build out and sustain this initiative,” said David Yoo, vice provost of the Institute of American Cultures. “The archive will serve as an important hub for future racial and social justice research by our faculty and students in partnership with our communities.”