For the past two years, Korean War veteran Herman Heisserer has wanted to see the outdoor furniture at the Veterans Home of California — West Los Angeles get spruced up. Thanks to a busload of UCLA volunteers it finally happened this morning.

The students sanded benches, patio tables and chairs, mostly by hand, and when Heisserer wasn’t chipping in he provided entertainment by playing a few numbers on his harmonica. Meanwhile, as the students worked on the furniture, another group of volunteers weeded a garden nearby. Inside, volunteers helped catalogue materials in the facility’s library and played games with residents.

The 50 volunteers, who were later joined by Chancellor Gene Block and his wife, Carol, were there as part of UCLA’s sixth annual Volunteer Day, during which more than 7,000 Bruins fanned out across more than 40 locations in Los Angeles County to help beautify, mentor, clean, paint, garden, sort and otherwise help out. Organized by UCLA’s Volunteer Center, Volunteer Day is designed to emphasize that volunteerism is at the heart of being a Bruin, and to inspire new and returning volunteers to join the center in serving the community throughout the year.

“It’s nice to give back to our veterans because they’ve done so much for us,” said volunteer Aditi Newadkar, a freshman from Pleasanton, California, who helped out at the Veterans Home.

In groups as small as 50 and as large as 400, Bruins could be spotted across Greater Los Angeles as they landscaped Griffith Park, cleaned trash from the banks of Ballona Creek, and joined senior citizens in their Zumba classes and computer labs. At more than two dozen schools, the volunteers painted murals, weeded gardens and mentored thousands of students.

Volunteer Day kicked off before 8 a.m. as more than 6,500 students began streaming down from the Hill to line up on the Intramural Field. They joined hundreds of team captains and project leaders and waited to board a fleet of buses that would take them to the volunteer sites.

The grassy field roiled with mass movement as wave upon wave of blue T-shirted students joined up in lines, circles and knots of humanity, before they headed out. This year marked the first Volunteer Day that all new students as well as an army of volunteers and residence hall advisors convened in one location to board buses rather than wait at multiple pick-up points around the campus.

“It’s really exciting to have everybody in one place,” said Shannon Hickman, assistant director of the UCLA Volunteer Center as she stood in the middle of what looked like organized chaos, but was being well managed by an army of residence hall advisors.

While some students still looked dazed from sleep, others were more than just awake. A small group gyrated wildly to fast rhythms blaring over loudspeakers as they took dance cues from a group of three students from UCLA Recreation and FITWELL who were doing high-energy choreographed moves on a small stage. 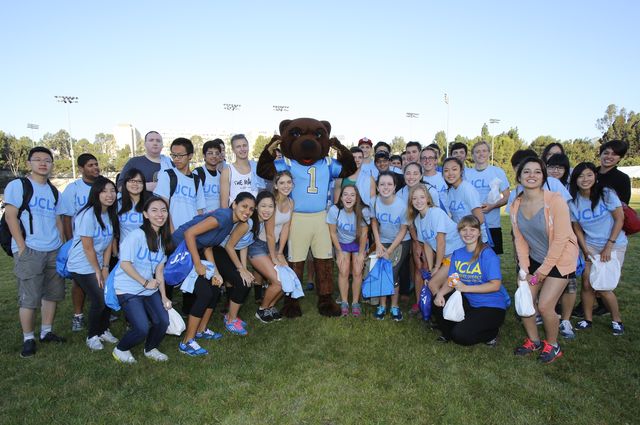 “It’s a good way to start out the year on the right foot and on a positive note,” said freshman Lydia Wang of Atlanta, Georgia. “And you get to meet a lot of people. In high school, I did quite a bit of volunteering. But it’s really awesome to see that a lot of Bruins have this volunteer spirit.”

Even students who weren’t required to volunteer decided to join in on the fun day of service. “This is my first time volunteering. I’m just so glad to be able to do this,” said Joyce Meng, a third-year doctoral student in statistics. While waiting to board a bus, Meng joined the ranks of students enthusiastically dancing on the grass to a hip hop beat. “I feel so glad I can be a part of this. I really love this school.”

Later in the morning four busloads carrying a total of 200 volunteers arrived at Los Angeles Elementary School in Koreatown. LAES, where every student qualifies for free lunches, is one of this year's largest projects, and the students were joined by Chancellor Block, State Senate President pro Tem-elect Kevin De León and other officials.

The LAES students formed two rows at the entrance of the school and greeted the arriving Bruins with a gauntlet of high-fives. At a school assembly Block spoke to about 100 fifth graders about UCLA’s pillar of service.

“The important thing is our students are learning volunteerism,” said Block, who noted that many of them volunteered in high school. “Now we want to make that tradition continue throughout college and have our students help out in the community.”

Volunteers painted a retaining wall in the kindergarten section. By the end of the project, many Bruins bore the signs of a job well-done with smears of paint smattered across their new Volunteer Day T-shirts. 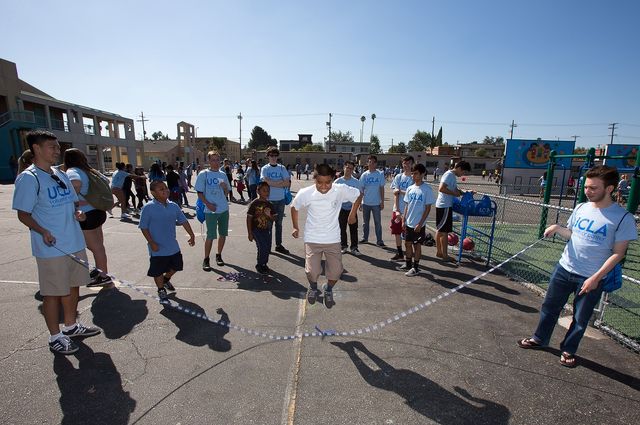 De León noted that in addition to the work the swarms of volunteers were doing — painting the walls, weeding planter boxes, talking to the students about college, and distributing $45,000 worth of school and dental supplies provided by the nonprofit K to College — they were also acting as role models.

“They're not getting paid. They're doing this from their hearts,” De León told the students during the assembly. He looked around the room. “How many of you boys and girls want to go to college?” Virtually every hand shot up into the air.

“I was always trained growing up that I would go to college but I know not every kid’s life is like that,” said UCLA freshman Taylor Mitsuuchi who played with the first graders on the playground after putting down a drop cloth for a painting project. “So I think it's cool that UCLA is helping to make an impression so early.”

The annual day of service is organized by the Volunteer Center, which asks community partners for a wish list of what they would like accomplished by Bruins on Volunteer Day, and the center sets up the leadership, supplies and training to make their wishes come true. Throughout the year, the Volunteer Center solicits recommendations for volunteer locations from locals and elected officials, and arranges volunteer opportunities for Bruins eager to stay involved in the community.

On Sept. 29, Volunteer Day can also be found on social media using #BruinsGiveBack or @UCLAVolunteer and by visiting the Volunteer Center pages on Facebook, Twitter, Flickr and Instagram. Get instructions for sharing your own stories and photos. Bruins of any stripe, from current students to interested community members, are invited to visit www.volunteer.ucla.edu year-round to learn how to get involved in the Volunteer Center's dozens of service opportunities.