On Oct. 31, the Armenian Studies Center of The Promise Armenian Institute at UCLA will host an online conference intended to frame the current conflict between Armenia and Azerbaijan in Nagorno-Karabakh in the context of the region’s complex history.

The webinar, “Nagorno-Karabakh/Artsakh and the Palimpsests of Violence, Conflict and Memory,” will take place from 10 a.m. to 5:30 p.m. Admission is free but advance registration is required.

To preview the conference, Sebouh David Aslanian, UCLA’s Richard Hovannisian Professor of Modern Armenian History and director of the Armenian Studies Center, offered his thoughts and perspectives on the conflict.

Both Armenia and Azerbaijan claim the other side initiated military action. What’s your understanding of how the current war in Nagorno-Karabakh began?

In the early hours of Sept. 27, Azerbaijan, backed by Turkey, launched an unprovoked and full-scale attack on civilian sites in the Republic of Artsakh, known more commonly as Nagorno-Karabakh.

The republic is located within the internationally recognized borders of Azerbaijan — borders that were established by the USSR — but has been governed by its indigenous Armenian-majority population as a de facto independent republic for the past 26 years.

Over the past three weeks, scores of civilians have been killed on both sides, and Armenian cultural and religious monuments such as a cathedral in Shushi, the region’s second largest city, have been targets of drone and missile attacks.

How are the latest hostilities connected to the conflict that began in the late Soviet period?

This is the third iteration of a war over a disputed territory where ethnic Armenians have lived for millennia. In 1988, at the height of perestroika and glasnost in the Soviet Union, Karabakh’s overwhelmingly ethnic Armenian population petitioned Moscow to recognize its right of self-determination and transfer the region back to Armenia — to which it belonged until Joseph Stalin unilaterally ceded the enclave, which was 95% ethnically Armenian, to the newly Sovietized republic of Azerbaijan in 1921 to appease the Kemalist leadership in Turkey.

Another region, Nakhijevan, was also annexed to Azerbaijan despite its Armenian population and cultural sites. Today, no Armenians live there, and their cultural sites have been bulldozed and cleansed of their Armenian traces. 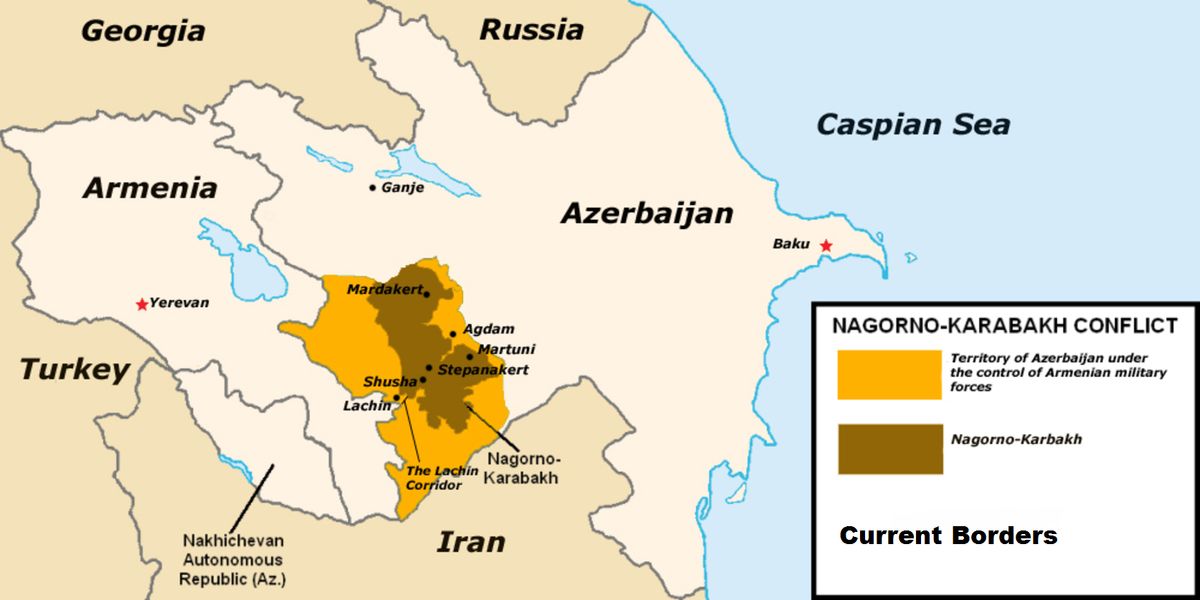 The decision of the regional authorities of Karabakh to rejoin Armenia on February 20, 1988, triggered several pogroms targeting Armenians in Azerbaijan, including in Sumgait in 1988 and Baku in 1990. Full-scale fighting and war broke out as the Soviet Union unraveled in 1991, leading to a victory by the Armenians of Karabakh, the de facto independence of the region, and the establishment of the Republic of Artsakh.

When it was all over, Armenian forces had control over the area of Nagorno-Karabakh as well as surrounding regions. More than 30,000 people had been killed in the fighting and around a million civilians on both sides had been internally displaced.

The cease-fire that ended the war in 1994 has been broken as much as it has been honored. A four-day war in April of 2016 was followed by a brief flare-up in July 2020, during which an Azerbaijani general was killed.

What makes the current conflict different from the previous iterations?

As Washington Post columnist David Ignatius wrote, the war has witnessed the tactical use of high-tech drones and precision weaponry unprecedented in the region. The deployment of such technology has altered the conventional military paradigm of tank and artillery warfare in which the Karabakh Armenians dominated in the 1990s.

News reports suggest that Azerbaijan has purchased over $10 billion worth of such weaponry from Russia, Israel and Turkey. The current war has also involved high levels of Turkish participation and the use of NATO-supplied weapons such as American-made F-16 fighter jets. Turkish troops and about 600 military personnel and advisers have been fighting on the Azeri side, as are thousands of Turkish-sponsored Syrian mercenaries.

The rhetoric of hatred has also significantly escalated. On July 16, an Azerbaijani Defense Ministry spokesperson boasted of his country’s ability to use high-precision missiles to strike Armenia’s Soviet-era nuclear power plant at Metsamor. That plant is located only 35 kilometers from Armenia’s sprawling capital of Yerevan, where one-third of the country’s population resides.

In July, Turkish President Recep Tayyip Erdogan gave a speech that many Armenians interpreted as a call to finish the genocide of the Armenians that his forebears in the Ottoman empire had begun in 1915.

Internationally banned weapons like cluster bombs have also been used against civilian targets in this asymmetrical war between Azerbaijan and Turkey on the one side, with a combined population of about 90 million, and Armenia and Karabakh, with a population of about 3 million.

All of these factors make the new round of fighting much more troubling than anything preceding it. On one hand, Russia has a treaty to defend Armenia in case of attack; on the other, a member of NATO is actively fighting on behalf of Azerbaijan.