The June 5 California primary election brought the first of two new changes to voting at UCLA. For the first time, all on-campus voting is taking place in Ackerman Union, rather than at several different locations. And by the time the general election takes place in November, a new technology will make it even easier for eligible students to register to vote.

A new feature being introduced this summer on the MyUCLA student portal will autofill a California voter registration with each student’s name and information, and then automatically send it to the California secretary of state’s office.

UCLA is the first University of California campus — and among the first universities in the nation — to offer the option.

“We know that many students will be able to vote for the first time when they arrive at UCLA, and we want to inspire a lifelong commitment to voting and civic engagement,” said Chancellor Gene Block. “College is a time and place where many young people first get involved in causes that matter to them, and it is our responsibility to facilitate engagement with those causes and the electoral process in particular.” 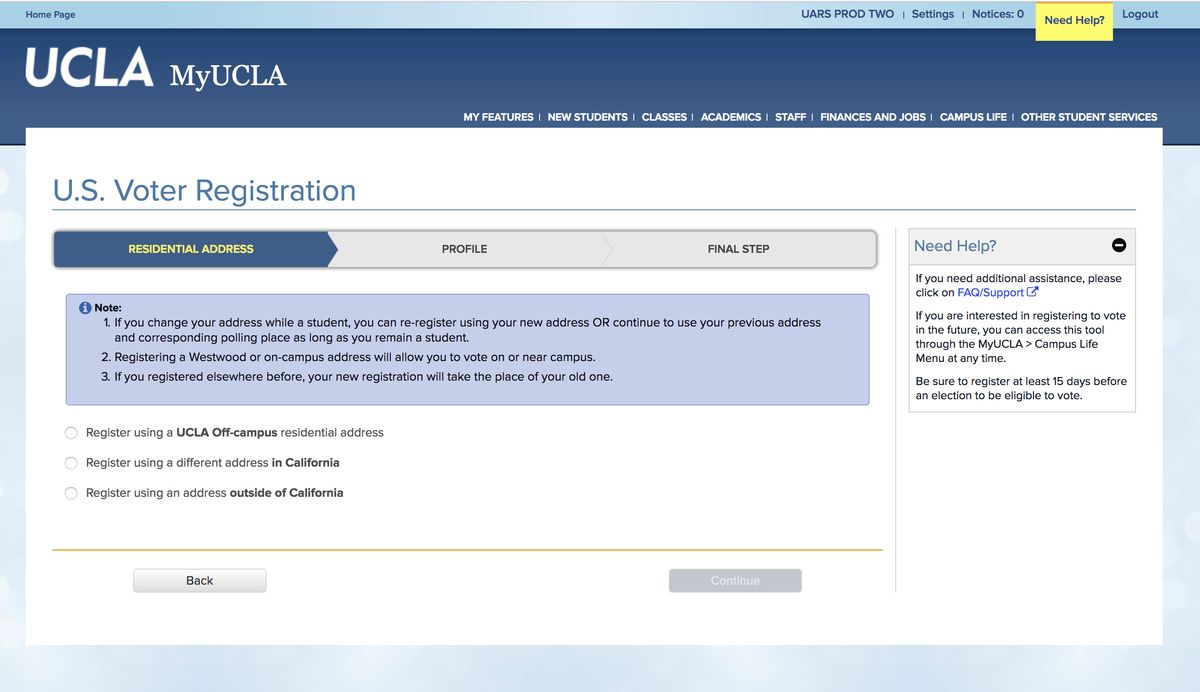 The streamlined registration process is part of a larger civic engagement strategy by several UCLA units, and it builds on several years of successful voter registration drives across campus. The introduction of Ackerman as a permanent, centralized “super polling station” is another key element in that strategy, said Rafael Sands, a UCLA senior who serves as student advisor to the University of California Board of Regents.

“We want to create not just an online tool, but a holistic plan that complements it, and really instill the practice of voting into Bruin culture,” he said.

The online voter registration technology has been in development for two years, following an agreement between the UC and the California secretary of state’s office. UCLA plans to have the service available to all students by the start of the 2018–19 academic year. After the form automatically populates with the student’s name and address, the user reviews and submits the information for verification by the secretary of state’s office.

The registration page uses standard secure technology to protect students’ information. Once it goes live, students will see a pop-up on their MyUCLA home pages alerting them to voter registration deadlines before each election.

Sultan Jinnah, a program analyst in UCLA’s information technology services department, led the team that created the proprietary technology, and he has already met with designers at UC Berkeley to help guide that campus’ efforts to implement the technology there.

“We can share some design aspects and provide support for other institutions,” he said.

UCLA will launch a campus-wide awareness campaign in the fall to let students know about the registration tool, and there will continue to be voter registration drives that provide access to nonpartisan information on propositions and candidates in upcoming elections. Additional promotion is planned for 2019 and 2020, as new students enroll.

Sands said consolidating polling at Ackerman means all students will know where to vote for every election throughout their time at UCLA, regardless of where they live on campus. In the past, students were frustrated not knowing which of five polling places in the residence halls was their proper voting location.

Another underlying goal is help students understand UCLA’s advocacy programs and the ways in which the university regularly works with the local, state and federal government, said Karen Hedges, deputy director for student development and campus life, in the student affairs department.

In 2016, a voter registration effort — supported by UCLA’s New Student and Transition Programs and Residential Life offices, as well as the Undergraduate Students Association Council and Bruins Vote organization — helped register more than 10,000 students to vote. Some 52 percent of students voted in the general election that year, an increase of 8 percentage points from the previous presidential election year, according to the National Study of Learning, Voting, and Engagement.

Sands said he hopes voter turnout in future years will surpass even the 2016 figures.