Insects make our lives better — they are an important piece of the food chain and they pollinate the plants we use for food and backyard ambiance. But humans make those jobs more difficult, in part because the artificial light we use alters insects’ normal behavior.

New research by UCLA and the Smithsonian Conservation Biology Institute shows how the kind of light people use makes a big difference, even in one of the buggiest places on Earth — the Amazon River basin. The study, published March 16 in Insect Conservation and Diversity, reveals that a certain kind of light minimizes humans’ impact on natural systems.

The study also reveal important findings for human health and comfort. Artificial light attracts biting insects and other bothersome or harmful species that can spread deadly diseases. The type of light people use, the research shows, can help keep people safer.

One of the study’s co-authors is UCLA conservation scientist Travis Longcore, whose previous research examined on what lighting, theoretically, would most and least interfere with insects. The Amazon basin — where the Peruvian government is planning an energy infrastructure project in an area that has never before been exposed to artificial light — provided the perfect opportunity to test his predictions.

“The question we wanted to answer is, ‘If you have to light these things, how should you do it to minimize the effects on the environment?’” Longcore said.

The paper found that LED light that is filtered to be yellow or amber in color attracts fewer of the flying insects that are integral to the health of the local environment — and that blue and ultraviolet light are more damaging because they attract so many more.

When light is required for maintenance workers or other purposes, the study found, the trick is to use yellows and ambers, and to use the least amount of light necessary. While other kinds of lights are somewhat more effective at minimizing insect attraction, the research focused on LEDs because they are becoming the most common. LEDs are typically more energy efficient and effective than other light sources.

Jessica Deichmann, a Smithsonian conservation biologist, led the team of U.S. and Peruvian researchers into the jungle to conduct the study. (For those who traveled from the U.S., the trip from Washington, D.C., to the test location in Peru took five days, two airplane flights and three boat rides.) The project was nearly canceled when specialized batteries didn’t arrive on time, but a delivery person on a motorcycle got the batteries there on the last possible day before the researchers’ boat was scheduled to depart. 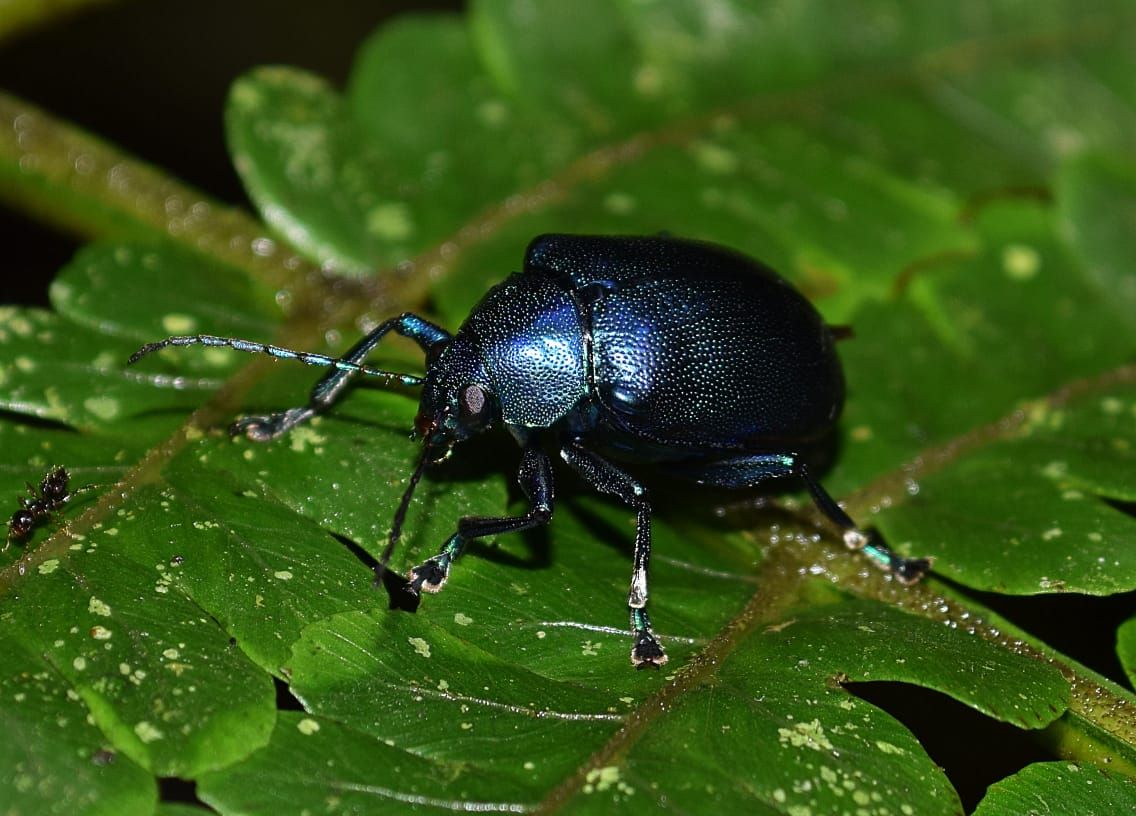 Edgard Leonardo Davila Panduro/Smithsonian
Beetles like this one are among the insects most attracted to artificial light at night in the area covered by the UCLA–Smithsonian study.

Once on site, researchers lived in a small tent town beneath a larger tent structure to protect them from intense rain. They installed various arrangements of LED lights and collected the insects that showed up, and then sorted, identified and counted the insects.

“Our results aligned nearly exactly with the predictions from Travis Longcore’s previous work,” said Deichmann, the study’s lead author. Longcore’s earlier studies identified an optimal light spectrum range for as many insects as possible at the same time.

The results also confirm that it is fairly easy for a company or new community to reduce their lighting’s impact on insects and biodiversity — simply select lamps that are least likely to attract not only insects but other wildlife. Lighting can be selected so that it interferes less with the natural behaviors of sea turtles, frogs and other species that are affected by artificial light at night.

Multiple studies in recent years have warned about the decline of insect populations and species diversity. As more infrastructure encroaches on natural ecosystems, the UCLA–Smithsonian research shows one way to minimize humans’ impact on them. Dimmer lights are better and it’s best if lights can be shut off at night. When a location must be lit at night, it’s better to go with amber-colored light than white light.

If lights attract insects that carry disease or cause the death of thousands of insects that pollinate food plants, human communities will pay a big price, Deichmann said.

The findings also have relevance far beyond the Amazon — and even beyond wildlife habitats generally.

“Changing your lights is something you can do right on your front porch,” Deichmann said.

“Or you can take action to make sure that the lights in your neighborhood are going to have the least impact possible on nature.”

For example, bug zappers emit light that attracts insects, but they are inefficient at killing species such as mosquitoes. They tend to primarily kill beneficial insects while drawing pests closer.

For Longcore, the results revealed a relatively basic message for everyone who chooses lighting for their homes and businesses.

“Don’t get the cold-light LEDs and put them all over your property,” he said, referring to colors like blues and violets. “Individual decisions do add up.”