When it comes to the ongoing barrage of presidential campaign ads, what’s working and why?

Politics and media experts from UCLA and Vanderbilt University will provide a data-backed understanding of commercials’ persuasiveness and effectiveness with SpotCheck, a new approach to rating political ads. A website that launched today will track the results of their efforts throughout the U.S. presidential campaign.

More than a half million presidential campaign ads have already aired during this election cycle, with many more to come. SpotCheck will evaluate two ads each week, providing reactions from everyday viewers as well as expert commentary by Lynn Vavreck, a UCLA professor of political science and communication studies, and John Geer, Vanderbilt’s Gertrude Conway Vanderbilt Professor of Political Science.

“It’s like a focus group, but with 1,000 people each week,” Vavreck said. “We are leveraging digital capabilities to gather and analyze data on the campaign in real time. The experimental design of our approach gives us tremendous power to detect the effects of these ads and is what sets SpotCheck apart from focus groups.”

Each week until the November 8 general election, SpotCheck will gather and quantify reactions from likely voters who will watch and rate two ads selected by Vavreck and Geer.

Data on their reactions will be posted on the site, where visitors can also watch the ads being evaluated, explore SpotCheck participants’ rankings and reactions, and read short takeaways from experts.

“We are trying to measure two things: people’s emotional engagement with the ads and the effectiveness of the ads in terms of boosting a candidate’s favorability ratings relative to the opponent’s ratings,” Vavreck said. “We are interested in understanding which ads are the most persuasive and why.”

Bernie Sanders’ “America” spot is one of the study’s highest-rated ads so far.

Examining the relationship between political ads and viewers is one of Vavreck’s key research interests. SpotCheck evolved as an extension of her work on the 2014 book “The Gamble,” which used quantitative data from tens of thousands of voters to tell the story of the 2012 presidential campaign. Vavreck also is a regular contributor to The Upshot, a New York Times blog that focuses on politics and policy analysis.

SpotCheck is designed to gather real evidence on political spots’ efficacy rather than relying on speculation from media outlets or pundits, Geer said. And rather than feeding the conversation about whether candidates’ ads are factually accurate, the project checks ads in a different way — to learn whether they have any chance of actually persuading voters.

Focus group participants evaluate randomly selected spots as they view them using a signaling device to indicate which moments they like and which they don’t, which provides data on the commercials’ “emotional engagement.” After viewing each ad, they respond to a series of questions to further gauge their reactions. A formula created by Vavreck and Geer combines the two types of responses into an overall “SpotCheck Score” for each ad.

SpotCheck rates the ads’ effectiveness by comparing the difference in how people who viewed a particular ad say they feel about the advertiser — whether it’s a presidential candidate or a political action committee — and the advertiser’s opponent. The researchers also compare the subjects’ reactions to the opinions of people who have not viewed the ad. 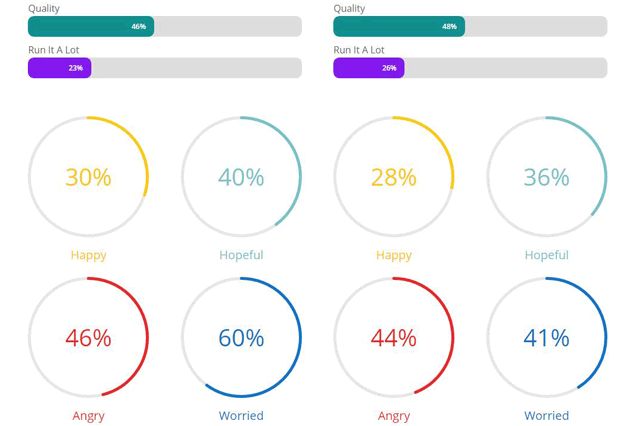 In data gathered thus far, the ads that have been judged most effective are Sen. Bernie Sanders’ “America” commercial, which was set to the 1968 Simon and Garfunkel song by that name, and a spot produced by the Our Principals PAC in which women read verbatim comments Donald Trump has made about women.

Presidential candidates and super PACs will spend as much as $5 billion on ads this year, up from about $2 billion during the 2012 race, Geer said.

“Candidates are running a 24/7 campaign with all these ads,” Geer says. “It’s important to figure out figure out if they make any difference.”

Funding for SpotCheck was provided by UCLA and Vanderbilt, with support from the Andrew Carnegie Fellows Program. Data for the project is being collected by research firms YouGov, G2 Analytics and SageEngage.