The UCLA Institute of the Environment and Sustainability presented the 2021 Pritzker Emerging Environmental Genius Award to Farwiza Farhan, who seeks to conserve wildlife in ways that also sustain humans living on the Indonesian island of Sumatra. Farhan was honored during an online ceremony on Nov. 18.

Farhan works with communities and courts to protect the Leuser Ecosystem — the last place on Earth where tigers, elephants, rhinos and orangutans live together in the wild. She founded and leads a nonprofit organization called HAkA. The name stands for Hutan, Alam dan Lingkungan Aceh, or Forest, Nature and Environment of Aceh; its goal is to ensure sustainable development plans serve humans and wildlife in Indonesia’s Aceh province.

“My desire to protect the forest initially comes from my love of wildlife, but the force that keeps me going is the strength of the people I work with,” Farhan said.

The Pritzker award, which is presented annually, carries a prize of $100,000 that is funded through a portion of a $20 million gift to UCLA from the Anthony and Jeanne Pritzker Family Foundation. It is the field’s first major honor specifically for innovators under the age of 40 — those whose work stands to benefit most from the prize money and the prestige it conveys.

Farhan, 35, fights ecological threats with teams who spend time living among communities around the Leuser Ecosystem to better understand their needs. Recently, she mobilized community leaders in the region to file a civil lawsuit against a development plan that could legitimize road and hydropower schemes, rights to farm oil palm trees and new settlements in the ecosystem.

She also oversees a team that patrols and intercepts would-be wildlife poachers. Since it began, the group has reduced poaching in the region by 95%.

The Pritzker Award is open to anyone working to solve environmental challenges through any lens — from science to advocacy to entrepreneurism. There were three finalists for the 2021 prize, and all are focused on regional or local challenges.

The other finalists were David Diaz, an advocate for active transportation and environmental health in California’s San Gabriel Valley, and Chook-Chook Hillman, who brings traditional Karuk tribal perspectives to bear on ecological problems in the Klamath River basin in Northern California and Oregon. A panel of UCLA faculty members selected the finalists from among 18 candidates who were nominated by an international group of environmental leaders. 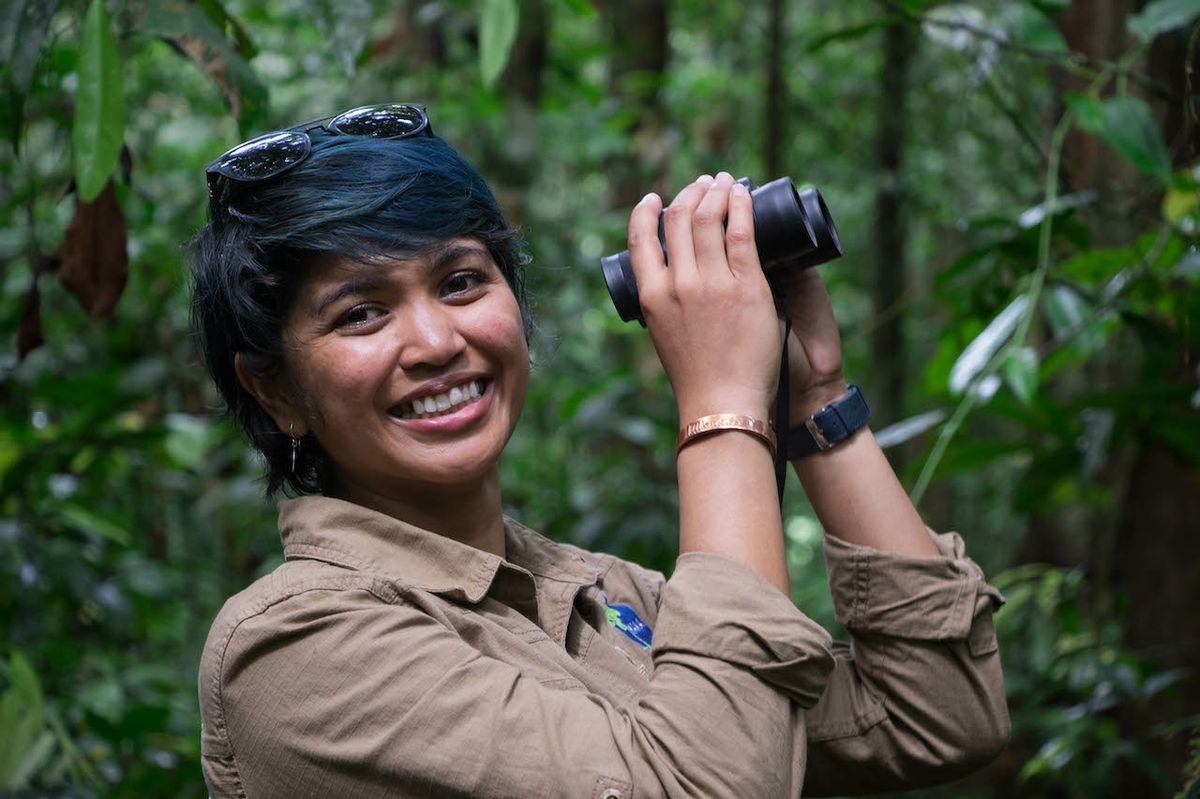 Courtesy of Farwiza Farhan
Farhan is the founder of HAkA, an organization dedicated to ensuring that sustainable development plans serve humans and wildlife in Indonesia’s Aceh province.

“Today we are in the midst of an existential crisis that human beings have never experienced before,” De Léon said in a video message to Farhan. “Your work as a researcher and forest conservationist is crucial to reversing the impacts of climate change and biodiversity loss.”

The announcement of Farhan as the winner was made by Tony Pritzker, who founded the award and is a member of the Institute of the Environment and Sustainability’s advisory board.

“Congratulations to David, Farwiza and Chook-Chook for having the courage to lead your communities and the next generation of environmental leaders,” Pritzker said.