Climate change is dialing up the pressure on species around the world. Polar bears may be the most iconic example, but creatures from corals to elephants are all affected by a warming, changing planet.

Individual species aren’t the only ones at risk of extinction. In the case of Pacific coastal wetlands, an entire ecosystem type could be wiped out by a rise in the sea level, according to UCLA and U.S. Geological Survey research published today in the journal Science.

“The bottom line is, especially in California, most of the salt marsh is going to go away by 2100,” said Richard Ambrose, a UCLA professor of environmental health and co-author of the paper. “Some will go away by 2050.”

Ambrose and his fellow researchers conducted a comprehensive evaluation of 14 estuaries along the Pacific coast of the United States, taking measurements at each location to determine the unique properties of the individual sites. Then, using established predictions, the researchers modeled how each place would respond under three scenarios — low, medium and high sea level rise. Under the low scenario, loss is minimal. With the high scenario, loss of coastal wetlands is almost total, particularly in California.

However, recent research shows even the high extreme sea level rise predictions may be conservative, Ambrose said. And there is plenty of uncertainty — no one knows exactly how much the oceans will rise by the end of the century.

“It depends a lot on what we do now,” Ambrose said. “In part, it depends on whether we’re able to reduce our emissions and greenhouse gases to limit climate change over the next 50 or 100 years. It also depends on what will happen to the ice sheets in Antarctica and Greenland.” (Previous UCLA research showed that Antarctica’s massive ice sheets could be in serious danger based on what conditions were like 16 million years ago, when the air and water were warmer than recent times.)

Glen MacDonald, a UCLA distinguished professor of geography and another co-author of the paper, said loss of the wetlands would affect other ecosystems as well.

“We could see an ecological cascading effect” that affects breeding and food systems for fish, birds and other organisms, MacDonald said. “If you erase an entire system, the effects are going to ripple upward to predators and downward to prey species. It is just startling.”

Coastal marshes are able to adapt to sea level rise by shifting inland through a process called transgression, but the rocky, cliffy Pacific coastline as well as human development prevent that from happening in most places, MacDonald said. 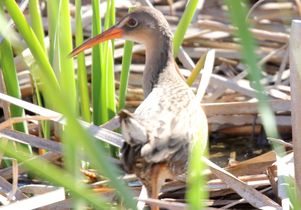 “Especially in SoCal, we’ve developed up to the edge of almost every marsh,” Ambrose said. “That limits what the marshes can do and how they can respond. It makes them much more vulnerable.” It leaves wildlife that depends on the marshes between a rock and a wet place.

Salt marsh inhabitants such as the endangered ridgway’s rail are especially at risk. The long-legged bird can’t swim. It forages for food in shallow waters and mud, eating crustaceans, fish and insects. Other species of birds, small mammals and insects that depend on the specific conditions of salt marshes would also find little to no suitable habitat by the end of the century, putting them in danger of extinction, Ambrose said.

Coastal marshes are important to people too. Located at the bases of rivers and streams, the marshes process water and materials coming from farther inland, helping to remove pathogens. The marshes also offer unique cultural, recreational and educational opportunities.

“These are places where people can fish, canoe, kayak and hike around the coast,” said Karen Thorne, lead author of the paper and a researcher with the U.S. Geological Survey. “Wetlands are also great flood protection. After the stormy El Niño last winter, they acted like sponges to absorb that water.”

The paper’s results will help to inform policy decisions about what must be done — and how soon — to conserve the wetlands, Thorne said. One strategy involves acquiring upland property to allow the wetlands to adapt naturally. In places where cities butt up against the wetlands’ edges, however, that’s not an option, she said.

Other alternatives, such as adding sediment to raise the land, are more expensive. That option is currently being tested by Thorne and UCLA researchers at Orange County’s Seal Beach, where sea level rise is simulated because the ground has experienced subsidence, or sinking. Sediment was added one year ago, and for the next three years, researchers will monitor the area to see how well vegetation takes hold and to check other vital signs.