Roger Ulrich, a UCLA professor emeritus of astronomy and physics, is a recipient of the 2022 Kavli Prize in astrophysics.

Ulrich shares the prestigious honor with Belgian astrophysicist Conny Aerts and Danish astrophysicist Jørgen Christensen-Dalsgaard for their critical roles in developing the fields of helio- and asteroseismology. In announcing the award, the Norwegian Academy of Science and Letters said the scientists’ research on stellar vibrations “has laid the foundations of solar and stellar structure theory, and revolutionized our understanding of the interiors of stars.”

Merging the study of oscillations on the surfaces of the sun and other stars with mathematical modeling, Aerts and Christensen-Dalsgaard combined data analysis methods — such as time series analysis, pattern recognition and statistical modeling — with the physics and chemistry of thermodynamics, nuclear and atomic physics and quantum mechanics. Bridging all of those fields has enabled scientists to determine, with extraordinary precision, the physical properties of stellar interiors.

“This award is quite a surprise and an honor,” Ulrich said. “There is no doubt that helioseismology has developed into a very active area of research contributed to by a large number of deserving investigators. The number of ways the information is extracted is truly amazing.”

Ulrich was the first scientist to show that oscillations observed on the surface of the sun can be used to make precise measurements of the characteristics of its interior, and a mathematical model he developed gave the field of helioseismology a theoretical foundation. He also demonstrated that the sun behaves like an organ pipe, ringing with large numbers of acoustic waves, each having a resonant frequency.

Aerts and Christensen-Dalsgaard extended Ulrich’s model to apply to stars of all masses in various evolutionary stages.

“All three figured out a way to look at the inside of different types of stars and developed tools to study them precisely,” Viggo Hansteen, chair of the Kavli Prize astrophysics committee, said in a statement.

Ulrich joined UCLA’s faculty in 1970. That year, a few years after scientists observed that the sun’s surface moves up and down by a few kilometers approximately every five minutes, he made the key theoretical breakthrough that led to the field of helioseismology. His research convinced him that these oscillations resulted from sound waves bouncing inside the solar sphere, and he demonstrated that the sun has many acoustic waves, each with its own frequency.

Although scientists cannot hear the sounds, Ulrich was able to infer their existence. 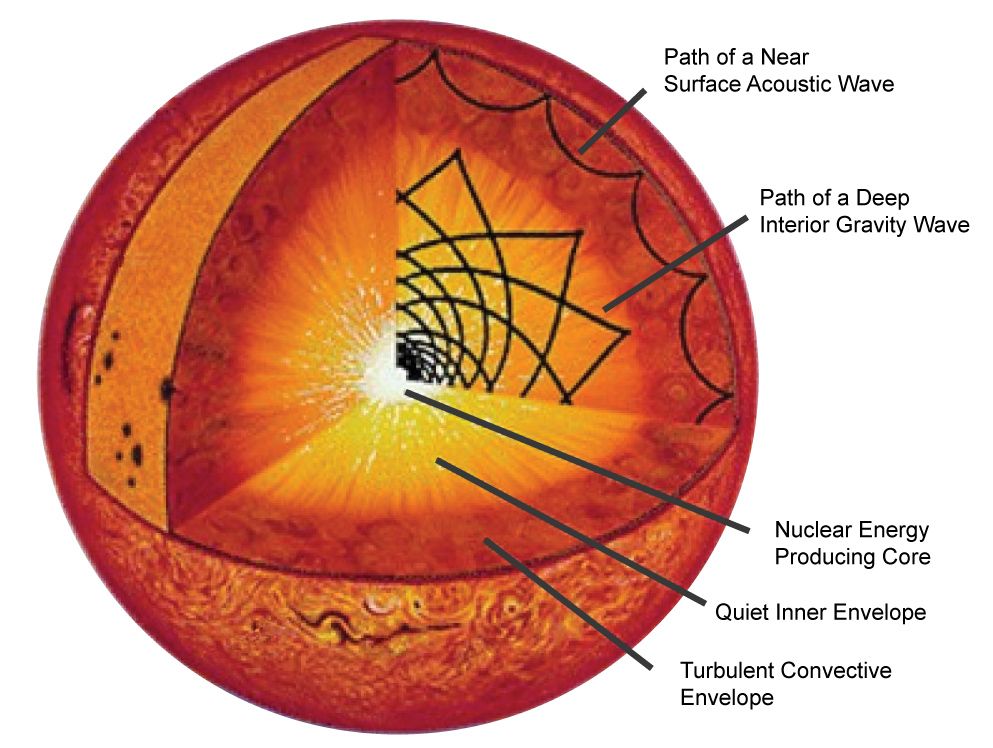 Newton Science Magazine
A cross section view of the sun. Ulrich showed that oscillations on the sun’s surface can be used to make precise measurements of its interior.

During a sabbatical in 1975, Ulrich conducted research at the Institute for Advanced Study in Princeton, New Jersey. He served as chair of UCLA’s astronomy department for six years and retired in 2008.

The Kavli Prize honors scientists for breakthroughs in astrophysics, nanoscience and neuroscience that transform our understanding of these complex fields. The astrophysics award honors achievements that advance knowledge of the origin, evolution and properties of the universe.

“We honor the 2022 Kavli Prize Laureates for their transformative contributions to science and society,” said Lise Øvreås, president of the Norwegian Academy, in a statement. “Their discoveries created entirely new fields, opened up new realms of scientific research and advanced science for the benefit of humankind.”

The three scientists will receive gold medals and equal shares of a $1 million prize. The Kavli Prize is presented through a partnership among the Norwegian Academy of Science and Letters, the Norwegian Ministry of Education and Research and the U.S.-based Kavli Foundation.