The political divisions that emerged and intensified during the 2016 U.S. presidential election were particularly apparent at colleges and universities: Students protested candidates, registered to vote and debated hot-button issues inside and outside of their classrooms.

According to findings of the Freshman Survey, an annual study of first-year college students administered by UCLA’s Higher Education Research Institute, political polarization on campuses is the most extreme it has been in the study’s 51-year history. The 2016 report is based on responses from 137,456 full-time, first-year students at 184 U.S. colleges and universities.

Just 42.3 percent of freshmen characterized their political orientation as middle of the road — the lowest figure since the survey began in 1966. Meanwhile, 35.5 percent considered themselves liberal or far left and 22.2 percent said their views are conservative or far right.

The report also reveals the survey’s largest-ever gender gap in terms of political leanings. An all-time high 41.1 percent of women identified themselves as liberal or far left, compared to 28.9 percent of men. Women also were more likely than men to agree that addressing global climate change should be a priority of the federal government (82.4 percent versus 77.6 percent) and to favor stricter gun control laws (75.4 percent versus 58.8 percent). 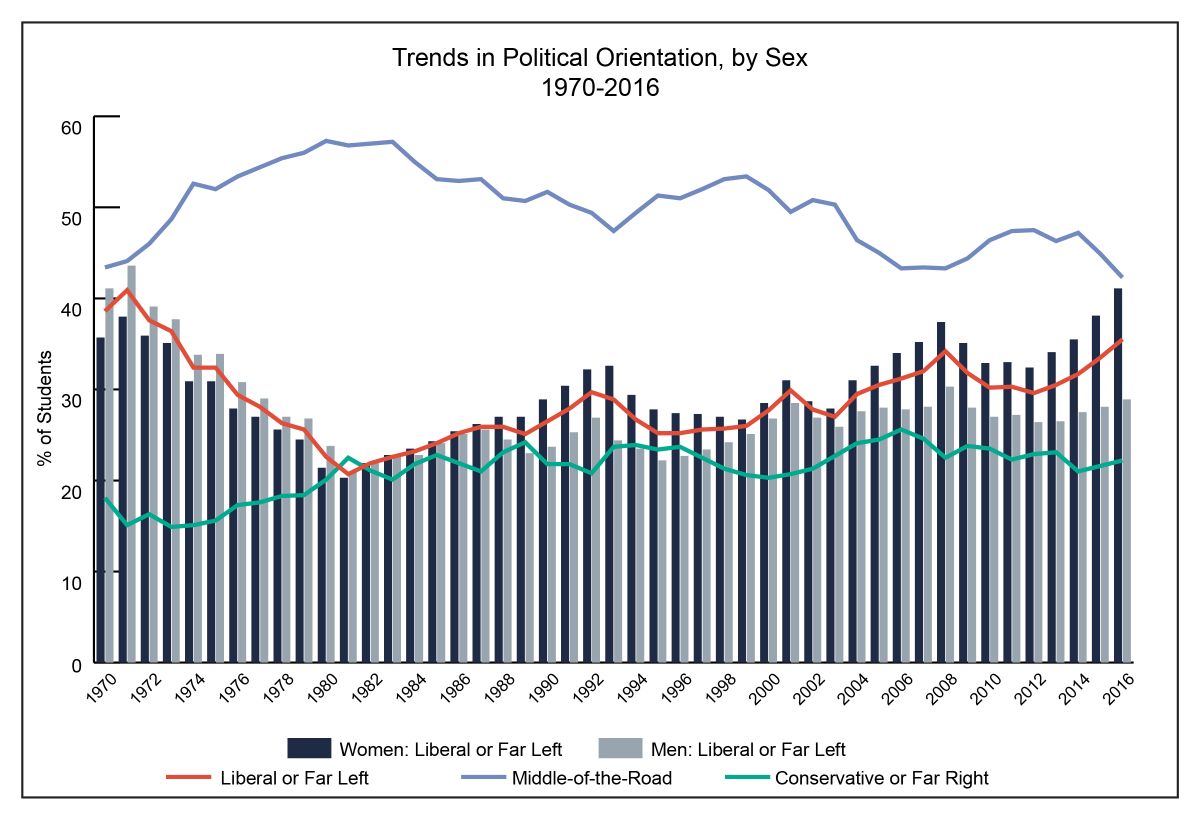 The survey also pointed to differences in students’ views of their own empathy for others. For example, 86.6 percent of students who called themselves left-of-center said their tolerance of people with different beliefs is “strong” or “somewhat strong,” compared 82.0 percent of centrist students and 68.1 percent of right-of-center students.

“The increased activism among entering college students we found in 2015 seemed to intensify in the months leading up the election, and our 2016 survey points to the diversity and polarity of how college freshmen perceive their place in the current political landscape,” said Kevin Eagan, lead author of the report and managing director of the institute, which is housed in UCLA’s Graduate School of Education and Information Studies. “The gender gap in students’ political beliefs and levels of empathy suggests an opportunity for campuses to facilitate dialogues that bridge differences.”

The rising cost of college was a prominent theme of the 2016 election cycle, and the survey found that 55.9 percent of students had concerns about paying for college.

The study also illustrated differences in how first-generation students (children of parents who didn’t attend college) choose which college to attend versus how their peers with college-educated parents decide:

Emotional health concerns on the rise

For the first time in the survey’s history, less than half (47.3 percent) of students consider their mental health to be above average relative to their peers. A record-high of 11.9 percent reported “frequently” feeling depressed in the past year, and 13.9 percent said there was a “very good chance” they would seek personal counseling in college.

Also for the first time, the survey asked students how often they had felt anxious in the past year; 34.5 percent of all students said they felt that way “frequently,” while among students who have psychological disorders, the figure was 79.5 percent.

“Students began college last fall with more complex mental health concerns than their peers from the previous three decades, and they express a greater willingness to seek support through counseling,” Eagan said. “While we have reported on these trends for the better part of a decade, we now have evidence that students with disabilities, psychological disorders, and chronic illnesses as well as discharged veterans experience these issues more acutely than their peers. It may be worthwhile for campuses to examine how well they integrate counseling and psychological services specifically for these students.”

Among the survey’s other noteworthy findings:

The 2016 study incorporated responses from first-time, full-time students at colleges and universities of varying levels of selectivity and type. The data was statistically weighted to reflect the demographic profile of the 1.5 million first-time, full-time students entering U.S. colleges in 2016. Since the study began in 1966, more than 15 million students at 1,900 colleges and universities have completed HERI surveys. The Freshman Survey is the largest and longest-running survey of American college students.