As work crews continued cleaning up after the Sunset Boulevard water main break, UCLA officials on Wednesday updated the status of campus facilities and gave preliminary details on the extent of damage.

Chancellor Gene Block expressed gratitude for those who worked overnight and through the day to clear water and remove debris. He acknowledged the incident “has been extremely difficult” for many, especially those with vehicles trapped in parking structures 4 and 7.

“I want to thank everyone for their patience, hard work, and generous assistance to their colleagues and strangers,” Block said.

Block said that a detailed damage assessment would be conducted after buildings are dried and debris removed, which would likely require several days. 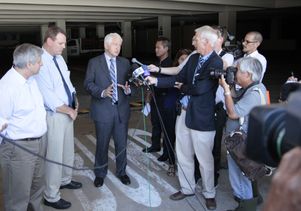 Large blowers were deployed Wednesday in Pauley Pavilion,  the J.D. Morgan Center and the Wooden Center.

Although 8 to 10 inches of water pooled on the Pauley Pavilion floor Tuesday night, all of the standing water was removed by this morning. UCLA officials said that the home to basketball, volleyball, gymnastics and to campus events such as UCLA College Commencement and Spring Sing would be ready for the opening of the fall sports seasons.

“While assessments are ongoing in regard to the damage and how to proceed, the building itself has not been structurally compromised,” said UCLA Athletic Director Dan Guerrero in a statement. “I am confident that the facility will be ready for our men’s and women’s basketball teams this upcoming season.”

Guerrero said that the condition of the court remains to be assessed, but that if the floor needs to be replaced, it will.

In his statement, Guerrero also thanked the quick actions of athletics staff and student-athletes, who helped make sure that the athletic Hall of Fame in the Morgan Center and all 111 of NCAA National Championship trophies were safe. There was minimal water damage to the Bud Knapp Football Complex and Acosta Athletic Complex. After clean-up, the building will be fully operational for the return of football.

Standing water is still being pumped from the underground parking structures at about 4,000 gallons of water per minute. At that rate, it could be Friday before both structures are clear of water.

About 960 vehicles remained trapped. Of those, about half belong to students and the rest were driven by UCLA staff, faculty and visitors. Officials cautioned those with vehicles in either location not to approach the structures because of safety concerns. Once the water is cleared, UCLA intends to have the vehicles towed to secured parking areas for processing and retrieval. Drivers who have registered at this site will be notified when more information becomes available.

Block said he had encouraged supervisors to let affected employees telecommute or alter their shift schedules when possible. Employees who can’t get to their cars are being offered a day of administrative leave with pay, subject to supervisors’ approval. Those who need to report to campus during the next few days may wish to visit the UCLA Transportation website for information about alternative commuting options.

Chancellor Block also recognized how members of the campus community came together in the wake of the flooding. The Office of Residential Life provided lodging for 20 people who were unable to drive home Tuesday night.

Power was restored in the Arthur Ashe Student Health and Wellness Center and remained out in the John Wooden Center, due to damage to electrical equipment. Both facilities remain closed. The Fernald and Krieger child care centers are expected to reopen on Thursday.

The 30-inch water main, a 93-year-old steel pipe carrying water under pressure from the city's Stone Canyon Reservoir, broke at 3:39 p.m. Tuesday, according to the Los Angeles Department of Water and Power. An estimated 8 to 10 million gallons of water flowed toward the campus or into storm drains. UCLA's intramural field, North Athletic Field and Drake Stadium — where a new blue and gold track was recently installed  — were quickly inundated.