A team of scientists and engineers from UCLA and Japan’s University of Shizuoka has discovered a new mode of enzyme catalysis, the process that speeds up chemical reactions.

The researchers also demonstrated that the enzyme, called LepI, can catalyze reactions that were not previously observed in nature. Through computational modeling, they found that the process happens in a unique way that can create two different molecules at once.

“Mother Nature has amazing powers as a chemist in using enzymes to construct complex molecules in very efficient ways,” said Yi Tang, a UCLA professor of chemical and biomolecular engineering and a principal investigator on the study. “Our discovery showcased one naturally occurring enzyme and how it can be used as a tool to catalyze a very important and heavily studied synthetic reaction. This also suggests there could many more such enzymes waiting to be discovered and engineered.”

The study was published in the journal Nature. In addition to Tang, the research was led by Kendall Houk, who holds UCLA’s Saul Winstein Chair in Organic Chemistry, and Kenji Watanabe, a professor of pharmaceutical sciences at Shizuoka.

Enzymes are proteins that play a critical role in catalysis — the process of facilitating chemical reactions. (They help yeast break down starch into sugars, for example.) And enzymes use smaller molecules known as cofactors to help get those reactions going. 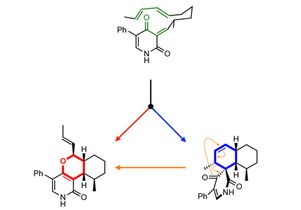 The new mode of catalysis became apparent as the researchers were studying a substance called leporin C, which is naturally produced by fungi and has insecticidal properties. The scientists discovered that an enzyme cofactor called S-adenosyl-L-methionine dependent, or SAM, helps LepI start a chemical reaction that ultimately produces leporin C.

The research revealed that LepI uses SAM in a unique way to stabilize molecules involved in a multiple-step chemical reaction, and that three pericyclic reactions take place during that process. Pericyclic reactions, so-called because they form or break chemical bonds on a ring (or “cycle”) of atoms, are among the most powerful tools for forming carbon-to-carbon bonds.

Among the UCLA researchers who made key contributions to the research were postdoctoral scholar Masao Ohashi, who isolated and characterized the enzyme, and showed that it catalyzed several reactions that had been observed before in nature; postdoctoral scholar Fang Liu, who performed computational modeling showing the unusual way the reactions happen; and Zhongyue Yang, a doctoral student, who used molecular dynamics simulations to determine what factors controlled the formation of specific chemical products. The paper’s other authors were Yang Hai, Mengbin Chen, Man-cheng Tang, all members of Tang’s research group at UCLA; and Michio Sato of Shizuoka.