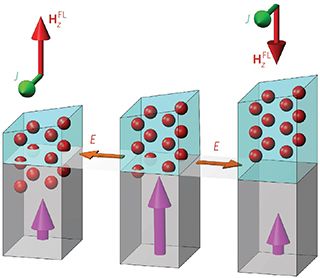 UCLA Engineering
Illustration of a new structure developed by UCLA researchers for more energy-efficient computer chips. The arrows indicate the effective magnetic field due to the structure's asymmetry.

Researchers at UCLA have created a nanoscale magnetic component for computer memory chips that could significantly improve their energy efficiency and scalability.

The design brings a new and highly sought-after type of magnetic memory one step closer to being used in computers, mobile electronics such as smart phones and tablets, as well as large computing systems for big data. The innovative asymmetric structure allows it to better exploit electrons' spin and orbital properties, making it much more power efficient than today's computer memory.

"This work will likely provide a powerful approach for engineering new nanoelectronic devices and systems," said Kang Wang, the Raytheon Professor of Electrical Engineering at the UCLA Henry Samueli School of Engineering and Applied Science and the study's principal investigator. "In conjunction with related types of magnetic devices being studied by our team, it represents a tremendous opportunity to realize higher performance memory and logic for future instant-on and energy-efficient, green electronic systems."

The research was published May 11 in Nature Nanotechnology.

Devices that use spin-based electronics, or "spintronics," consume less energy than conventional electronics by using electrons’ spins rather than their charge. A hot area of research within spintronics is reducing the need for electrical current by using both the spin and the orbital properties of electrons, also called "spin-orbit torque."

Spintronics-based computer chips use magnetic materials for increased power efficiency. The process that allows computer memory to be written — or computing functions to be performed — is triggered when electric current "switches" the polarity of an adjacent magnetic material. In existing spin-orbit torque devices, this process usually needs an adjacent magnetic field to fully complete the switch.

The structure devised at UCLA eliminates the need for an adjacent magnetic field. The researchers instead created an effective magnetic field by varying the angle of the structure by just a few atoms, in a shape resembling a cheese wedge: thicker on one end and sloping downward to a thinner edge on the other end. Although the height difference between the two ends is only a few tenths of a nanometer — or a few billionths of a meter — over the length of each device, the new configuration generates significant additional spin-orbit torque, which could potentially use one-hundredth the amount of energy used by the chips in today's consumer electronics.

The researchers observed the magnetic-field–free switching effect in several experiments, but the mechanism that allows the asymmetric geometry to improve magnetic switching is still under investigation.

"This is a promising first step, offering a potential pathway to engineering new spin-orbit torque memory cells, while also offering new insights into their physics," said Pedram Khalili, the study's co-principal investigator and an assistant adjunct professor of electrical engineering. "Further work is needed to develop a more detailed microscopic understanding of the new observations and further evaluate their application and scaling potential."

The study's lead authors are Guoqiang Yu, a postdoctoral scholar, and Pramey Upadhyaya, a graduate student, both in electrical engineering. Other authors include Yaroslav Tserkovnyak, UCLA professor of physics and astronomy; UCLA researchers in electrical engineering and physics and astronomy; and researchers from Zhejiang University in Hangzhou, China.

The study was supported by the Defense Advanced Research Projects Agency's Non-Volatile Logic Program; and in part by two UCLA Engineering Research Centers, the Center for Translational Applications of Nanoscale Multiferroic Systems (which is funded by the National Science Foundation) and the Center for Functional Accelerated nanoMaterial Engineering (which is funded by DARPA and the Semiconductor Research Corporation). In addition, Upadhyaya and another co-author received support from a Qualcomm Innovation Fellowship. Wang is also a member of the California NanoSystems Institute.