Imagine a world with little or no concrete. Would that even be possible? After all, concrete is everywhere — on our roads, our driveways, in our homes, bridges and buildings. For the past 200 years, it’s been the very foundation of much of our planet.

An even larger source of carbon dioxide emissions is flue gas emitted from smokestacks at power plants around the world. Carbon emissions from those plants are the largest source of harmful global greenhouse gas in the world.

A team of interdisciplinary researchers at UCLA has been working on a unique solution that may help eliminate these sources of greenhouse gases. Their plan would be to create a closed-loop process: capturing carbon from power plant smokestacks and using it to create a new building material — CO2NCRETE — that would be fabricated using 3D printers. That’s “upcycling.”

“What this technology does is take something that we have viewed as a nuisance — carbon dioxide that’s emitted from smokestacks — and turn it into something valuable,” said J.R. DeShazo, professor of public policy at the UCLA Luskin School of Public Affairs and director of the UCLA Luskin Center for Innovation.

“I decided to get involved in this project because it could be a game-changer for climate policy,” DeShazo said. “This technology tackles global climate change, which is one of the biggest challenges that society faces now and will face over the next century.”

DeShazo has provided the public policy and economic guidance for this research. The scientific contributions have been led by Gaurav Sant, associate professor and Henry Samueli Fellow in Civil and Environmental Engineering; Richard Kaner, distinguished professor in chemistry and biochemistry, and materials science and engineering; Laurent Pilon, professor in mechanical and aerospace engineering and bioengineering; and Matthieu Bauchy, assistant professor in civil and environmental engineering.

This isn’t the first attempt to capture carbon emissions from power plants. It’s been done before, but the challenge has been what to do with the carbon dioxide once it’s captured.

“We hope to not only capture more gas,” DeShazo said, “but we’re going to take that gas and, instead of storing it, which is the current approach, we’re going to try to use it to create a new kind of building material that will replace cement.”

The researchers are excited about the possibility of reducing greenhouse gas in the U.S., especially in regions where coal-fired power plants are abundant. “But even more so is the promise to reduce the emissions in China and India,” DeShazo said. “China is currently the largest greenhouse gas producer in the world, and India will soon be number two, surpassing us.”

Thus far, the new construction material has been produced only at a lab scale, using 3-D printers to shape it into tiny cones. “We have proof of concept that we can do this,” DeShazo said. “But we need to begin the process of increasing the volume of material and then think about how to pilot it commercially. It’s one thing to prove these technologies in the laboratory. It’s another to take them out into the field and see how they work under real-world conditions.” 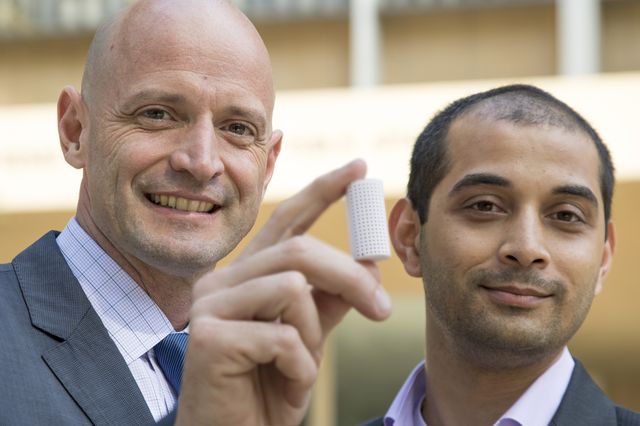 Roberto Gudino/UCLA
J.R. DeShazo, left, and Gaurav Sant show off a sample of the new building material they have created to replace concrete.

“We can demonstrate a process where we take lime and combine it with carbon dioxide to produce a cement-like material,” Sant said. “The big challenge we foresee with this is we’re not just trying to develop a building material. We’re trying to develop a process solution, an integrated technology which goes right from CO2 to a finished product.

“3-D printing has been done for some time in the biomedical world,” Sant said, “but when you do it in a biomedical setting, you’re interested in resolution. You’re interested in precision. In construction, all of these things are important but not at the same scale. There is a scale challenge, because rather than print something that’s 5 centimeters long, we want to be able to print a beam that’s 5 meters long. The size scalability is a really important part.”

Another challenge is convincing stakeholders that a cosmic shift like the researchers are proposing is beneficial — not just for the planet, but for them, too.

“This technology could change the economic incentives associated with these power plants in their operations and turn the smokestack flue gas into a resource countries can use, to build up their cities, extend their road systems,” DeShazo said. “It takes what was a problem and turns it into a benefit in products and services that are going to be very much needed and valued in places like India and China.”

DeShazo cited the interdisciplinary team of researchers as a reason for the success of the project. “What UCLA offers is a brilliant set of engineers, material scientists and economists who have been working on pieces of this problem for 10, 20, 30 years,” he said. “And we’re able to bring that team together to focus on each stage.”

According to Sant, UCLA is the perfect place to tackle sustainability challenges.

“As one of the leading universities in the world, we see ourselves as having a blue-sky approach,” Sant said. “We see ourselves wanting to develop technologies that might be considered fanciful at one point but become reality very quickly. So we see ourselves looking at a blue sky and saying, well then, let’s come up with ideas which will change the world.”