How do you keep the world’s tiniest soda cold? UCLA scientists may have the answer.

A team led by UCLA physics professor Chris Regan has succeeded in creating thermoelectric coolers that are only 100 nanometers thick — roughly one ten-millionth of a meter — and have developed an innovative new technique for measuring their cooling performance.

“We have made the world’s smallest refrigerator,” said Regan, the lead author of a paper on the research published recently in the journal ACS Nano.

To be clear, these miniscule devices aren’t refrigerators in the everyday sense — there are no doors or crisper drawers. But at larger scales, the same technology is used to cool computers and other electronic devices, to regulate temperature in fiber-optic networks, and to reduce image “noise” in high-end telescopes and digital cameras.

What are thermoelectric devices and how do they work?

Made by sandwiching two different semiconductors between metalized plates, these devices work in two ways. When heat is applied, one side becomes hot and the other remains cool; that temperature difference can be used to generate electricity. The scientific instruments on NASA’s Voyager spacecraft, for instance, have been powered for 40 years by electricity from thermoelectric devices wrapped around heat-producing plutonium. In the future, similar devices might be used to help capture heat from your car’s exhaust to power its air conditioner. 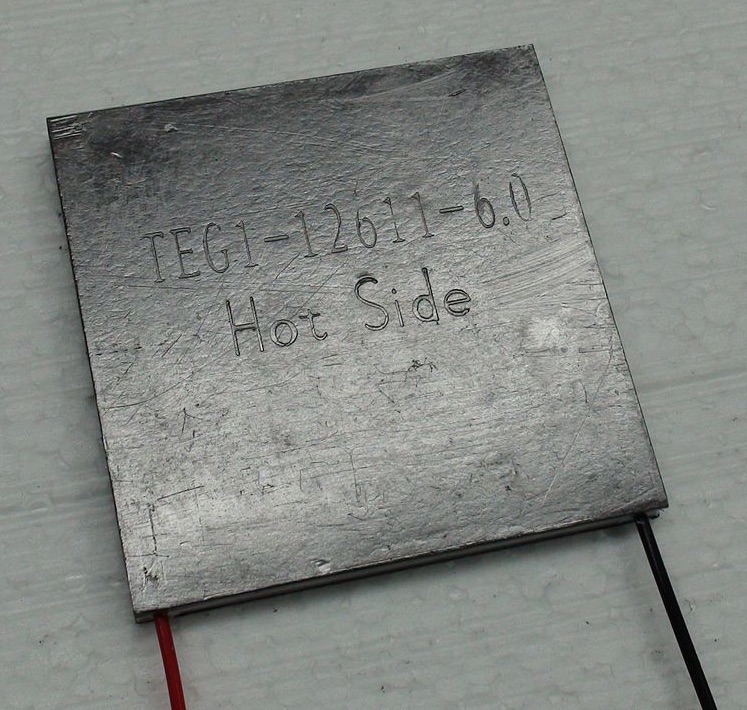 Wikimedia Commons
A standard thermoelectric device, which is made of two semiconductor materials sandwiched between metalized plates.

But that process can also be run in reverse. When an electrical current is applied to the device, one side becomes hot and the other cold, enabling it to serve as a cooler or refrigerator. This technology scaled up might one day replace the vapor-compression system in your fridge and keep your real-life soda frosty.

What the UCLA team did

To create their thermoelectric coolers, Regan’s team, which included six UCLA undergraduates, used two standard semiconductor materials: bismuth telluride and antimony-bismuth telluride. They attached regular Scotch tape to hunks of the conventional bulk materials, peeled it off and then harvested thin, single-cystal flakes from the material still stuck to the tape. From these flakes, they made functional devices that are only 100 nanometers thick and have a total active volume of about 1 cubic micrometer, invisible to the naked eye.

To put this tiny volume in perspective: Your fingernails grow by thousands of cubic micrometers every second. If your cuticles were manufacturing these tiny coolers instead of fingernails, each finger would be churning out more than 5,000 devices per second.

“We beat the record for the world’s smallest thermoelectric cooler by a factor of more than ten thousand,” said Xin Yi Ling, one of the paper’s authors and a former undergraduate student in Regan’s research group.

While thermoelectric devices have been used in niche applications due to advantages such as their small size, their lack of moving parts and their reliability, their low efficiency compared with conventional compression-based systems has prevented widespread adoption of the technology. Simply put, at larger scales, thermoelectric devices don’t generate enough electricity, or stay cold enough — yet.

But by focusing on nanostructures — devices with at least one dimension in the range of 1 to 100 nanometers — Regan and his team hope to discover new ways of synthesizing better-performing bulk materials. The sought-after properties for materials in high-performance thermoelectric coolers are good electrical conductivity and poor thermal conductivity, but these properties are almost always mutually exclusive. However, a winning combination might be found in nearly two-dimensional structures like those Regan’s team has created.

An additional distinguishing feature of the team’s nanoscale “refrigerator” is that it can respond almost instantly.

“Once we understand how thermoelectric coolers work at the atomic and near-atomic level,” he said, “we can scale up to the macroscale, where the big payoff is.”

Measuring how cold the devices become

In 2015, Regan’s research group developed a thermometry technique called PEET, or plasmon energy expansion thermometry, which uses a transmission electron microscope to determine temperatures at the nanoscale by measuring changes in density.

To measure the temperature of their thermoelectric coolers, the researchers deposited nanoparticles made of the element indium on each one and selected one specific particle to be their thermometer. As the team varied the amount of power applied to the coolers, the devices heated and cooled, and the indium correspondingly expanded and contracted. By measuring the indium’s density, the researchers were able to determine the precise temperature of the nanoparticle and thus the cooler.

“PEET has the spatial resolution to map thermal gradients at the few-nanometer scale — an almost unexplored regime for nanostructured thermoelectric materials,” said Regan, who is a member of the California NanoSystems Institute at UCLA.

To supplement the PEET measurements, the researchers invented a technique called condensation thermometry. The basic idea is simple: When normal air cools to a certain temperature — the dew point — water vapor in the air condenses into liquid droplets, either dew or rain. The team exploited this effect by powering their device while watching it with an optical microscope. When the device reached the dew point, tiny dewdrops instantly formed on its surface.

Regan praised the work of his student researchers in helping to develop and measure the performance the nanoscale devices.

“Connecting advanced materials science and electron microscopy to physics in everyday areas, like refrigeration and dew formation, helps students get traction on the problems very quickly,” Regan said. “Watching them learn and innovate gives me a lot of hope for the future of thermoelectrics.”

The research was supported by STROBE, a Science and Technology Center funded by the National Science Foundation’s Division of Materials Research, and by the UCLA Division of Physical Sciences Entrepreneurship and Innovation Fund.