By the 2070s, global warming will increase extreme rainfall and reduce snowfall in the Sierra Nevada, delivering a double whammy that will likely overwhelm California’s reservoirs and heighten the risk of flooding in much of the state, according to a new study by UCLA climate scientists.

Warmer temperatures will increase rainfall during heavy wintertime precipitation events and reduce snowpack that usually melts throughout the spring and summer. This means mountain reservoirs that currently catch this runoff could be overwhelmed in the winter and dry in summer, said Xingying Huang, who led the study as a postdoctoral researcher at the Center for Climate Science in the UCLA Institute of the Environment and Sustainability. The research is published in Geophysical Research Letters.

“When the heavy snow events of the past become heavy rain events in the future — and they’re even bigger than before — downstream communities face a greater risk of flooding,” said Huang, who is now continuing her postdoctoral work at UC Santa Barbara.

The study projects that average precipitation during extreme future atmospheric rivers, long corridors of moisture in the atmosphere that can carry more water than the Amazon River, will increase by about 25%, and that a much lower proportion of that precipitation will fall as snow. As a result, the increase in runoff will be dramatic — nearly 50%, according to the study.

That phenomenon will, among other things, increase the burden for California’s water managers, who already face the weighty challenge of collecting just enough water to last through the summer while leaving enough space in reservoirs to catch extra runoff from winter storms and prevent flooding — a balance that will be even more difficult to maintain as climate change continues, Huang said.

California reservoirs supply water to the state’s 39 million residents and over 5 million acres of irrigated farmland. They mitigate flooding by capturing excess water from heavy surface flows resulting from large atmospheric rivers. The UCLA research found that climate change will increase the size of these rivers, straining the capacity of California’s reservoirs to capture all of the resulting surface runoff.

Atmospheric rivers form when seawater evaporates and condenses into moisture-laden plumes; they dump moisture as rain and snow upon contact with land.

Alex Hall, a UCLA professor and climate scientist, said climate change is already increasing the amount of moisture in atmospheric rivers, which is creating extreme rainfall and floods, often by overwhelming vulnerable watersheds. 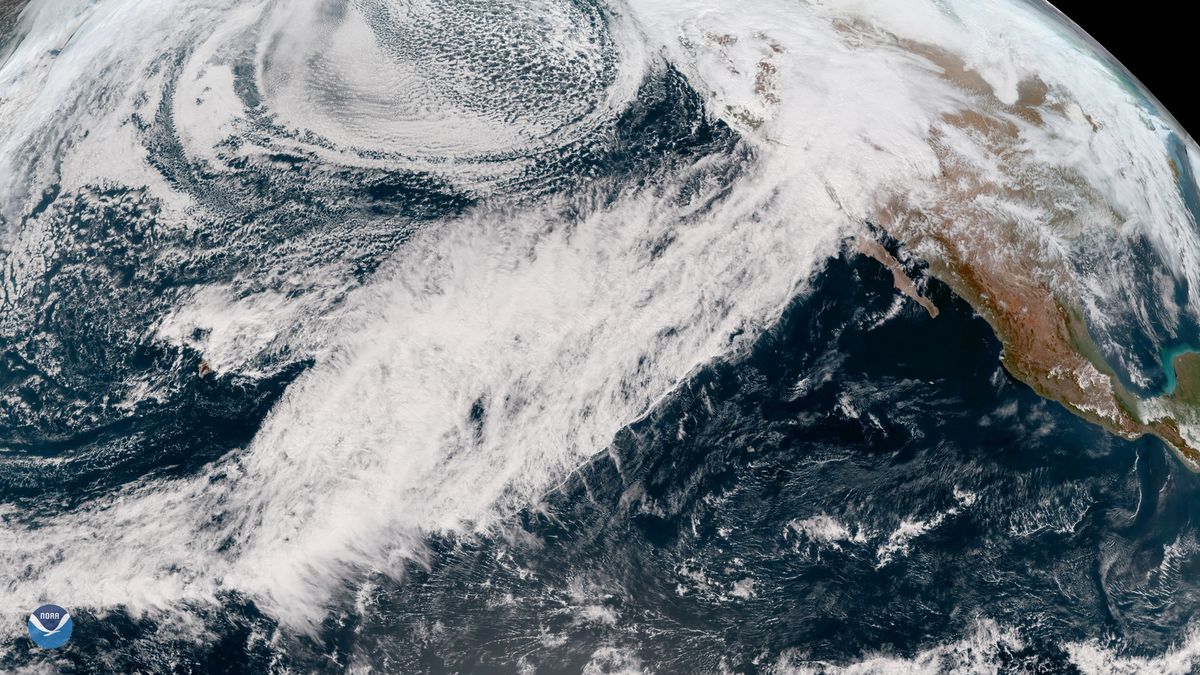 National Oceanic and Atmospheric Administration
A satellite image of an atmospheric river forming over the Pacific Ocean.

“The warmer air gets, the more moisture it can hold,” Hall said. “Future atmospheric rivers will be loaded up with more water. Then when they hit California, they will dump that extra water out on us.”

Using high-resolution climate modeling, the researchers simulated how extreme atmospheric river events will change if warming continues on its current trajectory. They projected that by the 2070s, atmospheric rivers will be even more intense, and could deliver to reservoirs two to five times more water per atmospheric river event, in some cases. That would create a serious risk for flooding, especially at elevations around 2,000 to 2,500 meters (roughly 6,500 to 8,200 feet) above sea level that are projected to have major declines in snowfall and the resulting significant increases in rain.

The study is the first to offer projections of future extreme atmospheric rivers that are detailed enough to inform water resource planning, which will be critical for California. The extra precipitation will need to be caught and stored, but Hall said building more reservoirs is not the solution.

“More reservoirs aren’t the answer because of their expense, their environmental impact and the fact that all the good reservoir sites already have reservoirs on them,” Hall said. “A more promising approach is to infiltrate that extra water into the ground.”

Samantha Stevenson, a professor at UC Santa Barbara, is the paper’s other co-author.