The world’s four most diverse and populous coastal habitats, described by researchers as the “marine equivalents of the Amazon rain forest,” are under threat from climate change. But no one knows exactly how severe the threat is.

In a new study, UCLA researchers will make the first detailed models predicting how climbing temperatures will affect the coastal climate in the four regions. The project is supported by a $2 million grant received this month from the National Science Foundation.

The effect of climate change on the oceans has been vastly understudied, say the researchers — and these regions should be of particular interest given the world’s dependence on them for their populous, species-diverse habitats. As one of the world’s leaders in ocean modeling and evaluating climate change, UCLA is well positioned to create the foundation for a true physics-to-fish understanding of how climate change could alter these areas.

“Roughly a fifth of worldwide ocean productivity is in these zones, and no one has really looked with this level of detail at the climate change implications for these precious marine areas,” said Alex Hall, a climate expert and professor in UCLA’s department of atmospheric and oceanic sciences and a member of UCLA’s Institute of the Environment and Sustainability. 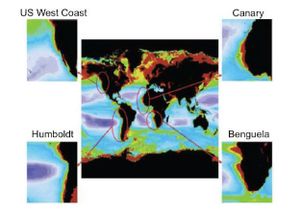 UCLA
The effect of climate change on the EBUS zones has been understudied, UCLA researchers say.

The researchers will use historical data of natural changes and climate change–related shifts from the past few decades to create a model that will allow them to predict changes that could occur through the end of the 21st century.

The five-year project focuses on the world’s four eastern boundary upwelling systems, or EBUSes, which are off the coasts California and Oregon, Peru and Chile, southern Africa, and Spain and northern Africa. All are narrow stretches of coastal water, hundreds of miles long and located at the eastern edge of an ocean; and they share unique properties that create nutrient-laden water. In these regions, cold ocean air mixes with warm land air to create high-pressure systems and sweeping winds that blow the top-most water out to sea, causing deeper water to rise to the surface. As it rises, the deeper water carries with it plant and animal matter from the ocean floor, delivering nutrients that fuel the entire food chain and attract large populations of a great variety of species.

“This research is important because it will give us an overview of the different upwelling systems, the mechanisms that drive their productivity, and how climate change can impact those mechanisms and productivity,” Renault said.

Current global climate models provide sketchy predictions of changes for EBUS areas, partly because the regions are such narrow slices of the globe. To overcome that flaw, the research team will develop the first fine-tuned model of the EBUSes to simulate the complex interaction between the ocean and the atmosphere, identify the difference between the natural variations in the ecosystems and variations due to climate change, and predict whether changes in cloud cover will allow in more or less sunlight and warmth.

Renault said that one shortcoming of global climate models is that they are low-resolution — they don’t zoom in on small features. “They poorly resolve the cloud cover and the upwelling, and they cannot show realistic physics of the ocean’s biogeochemical response,” he explained. “What we will develop is a realistic model of the whole system.”

The researchers plan to determine how much variation comes from natural fluctuations such as seasonal changes or phenomena like El Nino — the disruption in the tropical Pacific Ocean that affects weather and climate around the world — and how much can be attributed to climate change. The models will show how changing temperatures alter winds, and how those altered winds increase or decrease the water displacement that brings nutrients to the surface of the ocean. The researchers also will look beyond wind and water to predict data like sun exposure and light absorption by phytoplankton, which are the base of the food chain.

“We know that winds will change due to the warming climate, and some global climate models show significant changes in those along-shore winds,” Hall said. “The question is how that will lead to changes in ocean circulation in these critical marine ecosystems. They may be in real peril.”

Related research conducted concurrently by McWilliams, Deutsch, Renault and IoES interim director Mark Gold will develop models analyzing how man-made carbon dioxide and nitrogen emissions have changed the acidity and oxygen content of the oceans — and to predict the continued changes and their impact for the remainder of the century.

“On the West Coast, we already know that we have acidification of the water, but more research is needed to understand why,” Renault said. “These two projects go hand-in-glove, looking at the effects of climate change on the most important marine ecosystems in the world.”

The NSF-funded study is supported by grant number OCE-1419450.