It may not rank among the all-time greatest dramas, but the history of ice on Greenland has been a source of scientific controversy for more than a decade.

A study led by UCLA climate scientist Aradhna Tripati appears to put the debate to rest, with major implications for future research across a range of disciplines, from climate science to geology. The paper, which is published today in the journal Nature Communications, also sheds light on how global climate may change as people continue emitting greenhouse gases, revealing a potential tipping point: atmospheric carbon dioxide concentrations of 500 parts per million or more. Beyond that threshold, major ice sheets at both poles could melt significantly. Current levels are near 400 parts per million.

For years, the prevailing belief was that glaciers first appeared on Greenland between 5 million and 11 million years ago. Then, in 2005, Tripati authored a study suggesting the ice had been present there much earlier: about 35 to 40 million years ago.

Though Tripati’s paper was published in Nature — one of the most-respected scientific journals — it was considered controversial. At the heart of the conflict was a simple question: Why weren’t similar observations made by other studies? Because the findings were not in line with previous knowledge, the paper was regarded as an outlier.

Tripati, who was then a postdoctoral fellow, admits that her research, which was based on the chemistry of Pacific Ocean samples and what they implied about ancient seawater, was “a pretty indirect indicator.” Still, she had confidence in the results. She, her students and other researchers conducted a series of studies using different climate indicators, and they kept reaching the same conclusion.

“Understanding the history of ice at both poles and how they respond to changing carbon dioxide levels is so important that, as we published these papers, controversy built up,” said Tripati, who is a member of the UCLA Institute of the Environment and Sustainability. “We dug in and continued to try to understand what the history, in fact, was.”

In 2014, Tripati sent Dennis Darby, an Arctic paleoclimate specialist at Old Dominion University who became her co-author on the new paper, promising samples taken from a site in the Greenland Sea where icebergs that broke off — a process known as “calving” — from glaciers on the island would have drifted by.

“As glaciers move across land, they incorporate pieces of sediment,” said Tripati, who also is a professor of Earth, planetary and space sciences in the UCLA College. “As glaciers produce icebergs and those icebergs drift through the ocean, those little fragments of rock get released as the ice melts. Each rock fragment has a unique chemistry. That chemistry is a fingerprint — each grain tells you something about where the ice came from.”

Those samples are dated based on what fossils are present and their magnetic properties, allowing researchers to reconstruct where and when there was ice present on Greenland and other land masses in the Arctic, as well as when there was sea ice in the ocean.

Tripati chose to send those new samples to Darby because he had published a study that corroborated her 2005 findings. Using a method he pioneered, Darby analyzed them without knowing what he was looking at, where it came from or how old it was — sort of like a blind taste test.

He found that the samples contained “very high matches” to east Greenland source sites, again confirming Tripati’s earlier research. In fact, his analysis showed that large glaciers were present on Greenland even earlier: up to 47.1 million years ago. That was right at the beginning of the middle Eocene epoch, about 20 million years after dinosaurs went extinct.

Darby was also able to match ice from the samples to other locations across the Arctic region.

“That’s important,” Darby said. “It shows this was not just a local or regional effect in Greenland. It was something climatically induced on a much larger scale, a polar event.” 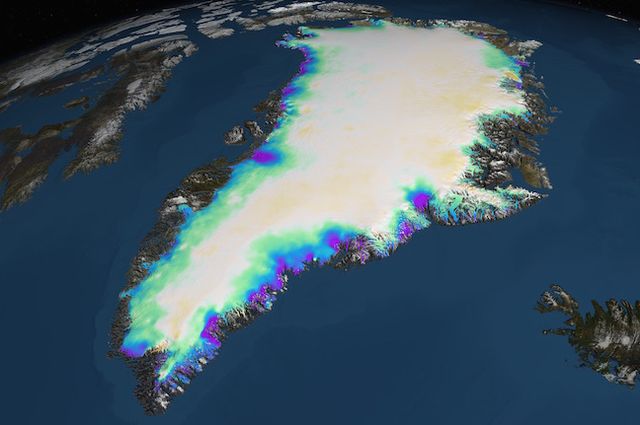 With their new study, Tripati and Darby think the mystery is solved. Darby’s technique was rigorously tested in a 2012 study and found to be accurate 98.5 percent of the time. They examined 100 sediment samples and fingerprinted the chemistry of more than 2,000 rock fragments.

Today’s paper also contains revelations about how atmospheric conditions relate to the presence or absence of ice. In the years since that first freeze, ice formed and retreated from Greenland several times. The researchers found that ice was usually present when carbon dioxide levels were lower than 500 parts per million.

“What happens if carbon dioxide levels get sustained at 800 parts per million, where some carbon emissions scenarios have us going?” Tripati asked. “Greenland has a lot of ice. If it all melted, it could raise sea level globally by about 20 feet.”

Ice comes and goes at both poles under those conditions, the study found. Tripati’s research from 2016 that suggested massive ice shelves on Antarctica are also at risk of melting supports this.

Understanding tipping points is important because Earth’s climate can change quickly, Darby said. He pointed to 10,000 years ago in Greenland, when temperatures rose 10 degrees Celsius in 10 years.

“Those thresholds need to be researched,” Darby said. “They are largely ignored by climate scientists because these things happened way in the past. Many of them are sort of stuck in the past 50 years. And in that time, we don’t see any big changes except in the past two decades, when we see very rapid changes that are concerning.”

Tripati said that controversies are good for science in general, she said — it shows the scientific process is healthy. She recalled cat-sitting for renowned scientist Sir Nicholas Shackleton around the time she was conducting the early study.

“He said to me ‘When you discover something surprising, remember that it’s OK to be wrong, but ideally you should be the person to find out. Always try to prove yourself wrong instead of trying to prove yourself right,’ ” Tripati recalled.

“I think that’s excellent advice. With this study, I didn’t know what we were going to find. If it didn’t work out, fine — we could have written a paper that definitively said ‘no evidence for this.’ And then we’re on the right side of science.”

The process also underscored the importance of including diverse perspectives in science, Tripati said. Last summer she launched the UCLA Center for Diverse Leadership in Science — the first initiative of its kind devoted to including people of all backgrounds in environmental science. Dogma that endured for decades can shift dramatically if the scientific community is inclusive and welcomes new perspectives, she said. Inclusion and social belonging will foster diversity, and research shows that leads to more creative approaches and ideas, fueling innovation and scientific breakthroughs.

Tripati and Darby both hope today’s findings inspire future research to better understand what will happen to Earth’s climate, species and human communities if we continue on our current carbon emissions trajectory.

“We need to start looking at what we’re doing,” Darby said. “Some people stick their heads in the sand because they think we’ll come up with technology to save us at the last minute. But that’s provided we don’t hit one of these thresholds first.”