Home is where more than just the heart is — it’s where the risk of obesity-related conditions such as diabetes and heart disease lurks.

It’s where countless people spend hours sitting on the sofa watching television instead of being physically active. And it’s where they will reach for conveniently packaged processed foods rather than spend the time and energy preparing a healthier meal from scratch.

To help residents change their home environment and reduce these risks, a group of public health experts from the Fielding School of Public Health led by professor William McCarthy, in partnership with researchers at USC and leaders from the East Los Angeles community, has devised a hands-on strategy that goes far beyond merely sitting down with residents to advise them about their diet and the benefits of physical activity.

With the cooperation of residents, they are going into the homes of at-risk families in East Los Angeles to work together to transform their living environment. Call it a home makeover for health.

For the population of East Los Angeles, which is overwhelmingly Mexican-American, the risk of obesity-related conditions such as diabetes and heart disease is markedly higher than for most other populations. So community health workers and a registered dietitian with the Cardiovascular Disease Risk Reduction Study are working one-on-one with families to change the “choice architecture” of their homes. 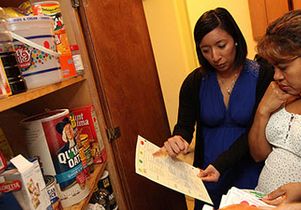 Robles explains the dot system that indicates how frequently or infrequently a food or drink should be consumed.

With the permission of residents, they will move the healthiest foods to the front of the family's refrigerator and pantry. They will confine the television to parts of the home where it’s less likely to be used during meal times. And they will strategically place athletic shoes and exercise equipment so that they are accessible and in plain sight — and thus never out of mind.

It’s an approach that takes its cue from the field of behavioral economics, which says that people’s moment-to-moment choices are heavily influenced by what’s immediately in front of them.

Making health a priority at home

When McCarthy and colleagues originally conceived the idea of including face-to-face coaching sessions in the home as part of the study, they figured it was impractical. They assumed residents would be suspicious of community health workers, known as promotores, wanting to enter their home and make changes.

But members of the project’s community advisory board assured the research team that the promotores would be warmly welcomed into study participants’ homes, and that has proved to be the case.

Indeed, McCarthy said, to a greater extent than in any study he has previously directed, the community has shaped the content of the intervention.

As part of the UCLA-USC Center for Population Health and Health Disparities, the project targets healthy adults in families where at least one member has been diagnosed with diabetes.

“What can happen to one member of the family is likely to happen to another member, given their shared home environment,” McCarthy said. Over the course of more than a dozen interactions — two in the home as well as group sessions at the Roybal Comprehensive Health Center in East Los Angeles — the promotores provide counseling on diabetes prevention through healthier eating, exercise and limited TV viewing.

To make the healthy food choice the easier choice, a registered dietitian accompanies a promotora on the home visits and, with permission from the study participants, affixes an adhesive-backed colored dot onto every food product in the refrigerator and pantry. 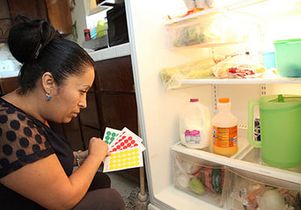 Promotora Cain marks food in a family's refrigerator with dots. Healthy foods are brought to the front of the shelf.

Rather than ban the red-dot foods, the dietitian recommends placing them in the back of the refrigerator or pantry, so that extra effort is required to retrieve them.

A similar tactic is used to promote physical activity. Multiple studies have concluded that the positioning of the television affects the amount of viewing, which is associated with obesity risk. The study participants are advised to keep the television out of the kitchen and bedrooms, where, in addition to promoting sedentary ways, it interferes with family conversation and homework for the children.

“TV watching should be a social affair,” McCarthy said.

By positioning athletic shoes where they’re conspicuous — next to the front door — they are not only easy to retrieve, but they serve as a visual reminder not to watch TV without first getting in some activity.

It starts at home

McCarthy notes that while many studies have focused on the effects of the neighborhood and community on diet and exercise, surprisingly little attention has been paid to the role of the home environment.

“The home is where a lot of people spend many hours a day, and it’s common sense that what’s in the home is going to affect people’s lifestyle choices,” he said. “We suspect this general approach is going to become a model for communities all over the country.”

This story has been adapted from one published in the Autumn 2013 issue of UCLA Public Health Magazine.