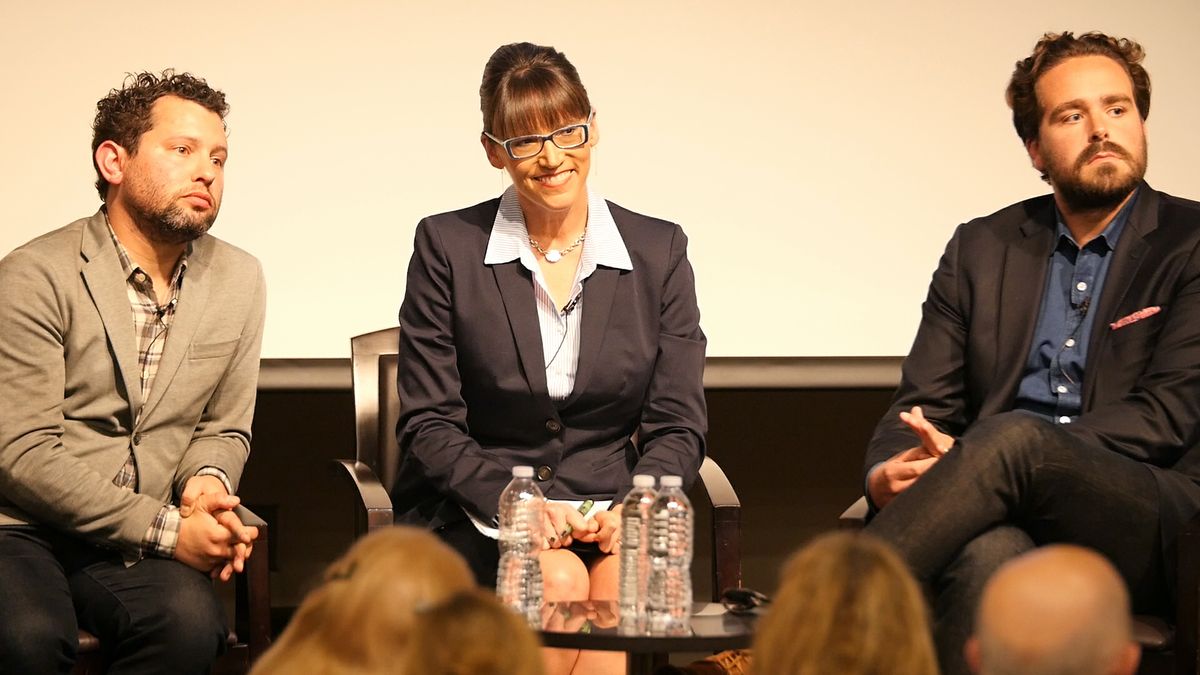 Donald Trump is a political phenomenon, a man extremely adept at maximizing his celebrity, which has kept him in the media spotlight throughout the presidential primary season and left his opponents fumbling in the wake of his wildly non-traditional, off-the-cuff publicity tactics, said political journalists Dylan Byers and Sasha Issenberg at a public discussion Tuesday night at UCLA.

“When history looks back at the Trump campaign, we will see it not so much as a political campaign as it is a media campaign,” Byers said.

The two longtime political reporters — former Politico reporter Byers is now senior reporter for politics and media at CNN while Issenberg is a contributor to Bloomberg Politics and a Washington correspondent for Monocle — joined Lynn Vavreck, UCLA professor of political science and communication studies, for this year’s first installment of the “U Heard it Here” lecture series, sponsored by the UCLA Department of Political Science. Before a packed audience, they examined the media coverage of Trump’s campaign to date.

His media campaign is highlighted by three constants provided by the man himself — conflict, availability and unpredictability, they explained.

This has created an overarching conundrum for members of the media, who are used to a certain status quo on the campaign trail. Generally, the media are criticized for truncating full campaign speeches down to brief news bytes and spotlighting those rare moments when the candidate drift away from his or her stump speech, which reporters and editors on the trail have heard ad nauseum.

“Seriously, if you sit in the back room with the journalists, you can see them basically doing karaoke to the stump speech,” Issenberg said.

On the flip side, the media have long lamented the lack of individual access to candidates. As campaigns lengthen, candidates spend less time with their press corps as their teams of analysts and publicists attempt to control and plot out a strategic messaging cycle.

“In previous campaigns, on a slow news day I could simply pitch a story about how many days it had been since Obama took a question, and it would get a lot of attention,” Byers said.

But with Trump, it’s been obvious from the start that he’s not a typical candidate, panelists reminded the audience, and that makes him “news,” they said.

Trump regularly upends reporters’ expectations by nearly always saying something new and radical in his speeches, and while he will blatantly attack the media in an effort to turn potentially negative coverage to his benefit, he is always at the ready to talk to any and all media outlets, which is almost unheard of for a candidate.

“No one loves the media as much as Trump,” Byers said, “both as a consumer of it and an active subject in it.” Trump recently called CNN producers to point out that Fox News was airing an interview with a woman decrying the fact that she was quoted in a negative New York Times article about him. He wanted to make sure CNN knew about her, said Byers, which it did.

Trump is also adept at maximizing his influence on social media; his tweets, for example, pressure producers and editors to react and influence how he gets covered, panelists agreed.

Access to the candidate and new information is vital for any outlet attempting to cover a campaign. Unlike more traditional candidates who try to lay low and avoid making national news for strategic reasons, Issenberg said, “Trump has had a whole tactical imperative to overexpose himself. And yes, that means there were days last year when he got 50 percent media share over all the candidates.”

There were also a lot of days when Trump didn’t explicitly try to overshadow his competitors, but when Cruz and Rubio were deliberately trying to avoid making news, the journalist said.

While Trump’s tactics seem to be extremely short-term and of-the-moment, he also doesn’t fear a fight; he is willing to take on a tremendous amount of risk, Issenberg said.

He also is relentless in his immediate messaging , for example, in his abject dismissal of whether or not he promised to release his taxes, or whether or not he is serious about banning all Muslims from the country, Byers said.

That relentless self-confidence and, admittedly, charisma are appealing to an angry base and can sometimes even break down a well-researched and well-seasoned reporter, Byers said.

As for the future, Byers and Issenberg predicted there will be natural course correction of sorts to balance coverage of the remaining candidates as the campaign moves into the general election.

“In a general election, you won’t be able to tell a Trump story without also telling a Hilary story,” Byers said.

Thus far, Trump has seemingly been able to shake off all criticism; at least to his impassioned base of supporters who are angry with Washington, but he is “not Teflon,” Byers said.

“There are plenty of people who will never vote for him,” he added.  But Byers also cautioned, don’t underestimate him either. Trump could very well be elected.

"Though there’s no evidence he would even enjoy being president,” Issenberg quipped.

“If there’s any lesson we should take away from the last 10 months, it’s that you should not underestimate his ability to upend conventional wisdom, to dominate the narrative and to prove that celebrity has power,” Byers said. “Part of the reason Obama got elected [and] … Reagan got elected was celebrity.”