It would be easy to mistake Tammy Barreras, JC De Vera and Jayanthi Daniel for any of the hundreds of staffers who hustle through the hallways of L.A.’s historic City Hall each day. The three have official city badges, they each work in the mayor’s office, and their days are packed with memos, deadlines, proposals, city events and projects — all geared at improving the lives of Angelenos.

But when this trio clocks out, they each take on a role that’s unmatched by most city employees: full-time graduate student.

Together, the three make up the 2016-17 cohort of the David Bohnett Fellowship Program at the UCLA Luskin School of Public Affairs. The program offers a unique opportunity for graduate students to work closely with Mayor Eric Garcetti’s staff at the same time they are completing their master’s degrees at UCLA.

The fellowship program, which accepts applications from UCLA Luskin students majoring in public policy, social welfare and urban planning, consists of one summer of full-time work in the mayor’s office, followed by a yearlong, part-time position at City Hall during the fellows’ second year of coursework at Luskin.

UCLA has offered the fellowship for students in the School of Public Affairs since 2007.  Each fellow works in a different department within the mayor’s office. Barreras, a student in the social welfare program at Luskin, works in the innovation and performance management unit under Garcetti’s Budget and Innovation Department. 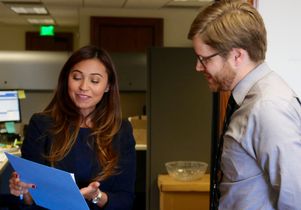 “We work with city departments, and we empower city employees to deliver better services, whether it’s through strategy or using problem-solving tools,” Barreras said. “We do general manager reviews to keep city heads accountable and measure the successes of the departments.”

Barreras grew up in the San Gabriel Valley community of La Puente. She previously worked as an inpatient pharmacy technician in Orange County before pursuing her undergraduate work at Cal State Los Angeles. She had plans to become a pharmacist before shifting her focus to social work after realizing her true passion was helping those in need.

“I feel like my life prepared me for this experience in City Hall,” she said. “I came here with the purpose of impacting the millions of people in this community, and for me, this is an opportunity to understand how to do it.”

De Vera, a graduate student in public policy, works in the mayor’s Office of Immigrant Affairs. Much of his work involves legislative advocacy and community outreach programs. One of his first projects at City Hall was helping organize a press conference during which the mayor announced the launch of a voter registration campaign geared for Spanish-speaking Angelenos.

“Working in government, every day is very dynamic,” De Vera said. “In the public policy curriculum, we’re learning about political institutions and policies: How do you actually get things done? How do you get policies passed? Being in the mayor’s office has illuminated all of that and really brought it to life.”

Daniel, also a graduate student in social welfare, conducts her fellowship work in the office of Ana Guerrero, the mayor’s chief of staff. It’s a rare appointment — only one other fellow in the program’s history has had a chance to work there. Daniel's work largely involves research, hands-on team assistance and event execution. Due to the broad scope of work that is assigned to the mayor’s chief aide, Daniel finds herself working on a variety of projects and programs.

“I provide support wherever needed,” she said. “It’s hard to put down exactly what I do because, in the nature of politics, my job changes every day that I’m in here. What it all boils down to is that we’re trying to achieve the mayor’s agenda for Los Angeles.”

Daniel, a former journalist, works closely with Guerrero, the city’s first Latina chief of staff and one of the highest-ranking Latina city officials.

Because the fellows are also full-time students, there is often overlap between what is discussed in the classroom and at City Hall.

“We can bring a lot of the work we’re doing here into the classroom setting, because we have a unique opportunity to have this experience,” Barreras said. “Whenever topics about civic engagement come up in class, we can talk about the city application from our perspective working in the fellowship.”

The David Bohnett Foundation has been funding the program for UCLA students for the past 10 years, and now supports similar programs for graduate students at the University of Michigan and New York University.

For the past five years, Bohnett Fellows from each of the three campuses have attended the United States Conference of Mayors in Washington, D.C. The conference brings together civic leaders from more than 1,400 U.S. cities to build partnerships, work on policies and discuss successes and best practices.

This year’s winter meeting of the conference will be held Jan. 17-19.

Barreras said she hadn’t yet seen the agendas, but is looking forward to learning from leaders in diverse cities and recognizing that the City of Los Angeles is a leader among its peers.

“We’re going to see what a lot of other cities are doing at the city government level,” she said. “While there will be many small cities and big cities, L.A. is one of the biggest cities that will be looked to for innovative and progressive ideas.”