Laure Murat, a professor of French and Francophone Studies at UCLA and a native of Paris, is closely following the presidential election in her homeland. As director of the UCLA Center for European and Russian Studies, Murat has been revisiting the recent history of Europe as part of the center’s 60th anniversary.

The first round of voting in the French presidential election, held April 23, saw four candidates each take roughly close to 20 percent of the vote. Two of them were thrown out — Jean-Luc Mélechon from the left and François Fillon from the right. The top two winners — self-declared centrist Emmanuel Macron (24% of the vote) of the En Marche! movement and Marine Le Pen (21.3%) of the nationalist Front National — will now face off in the final round of voting this Sunday, May 7. 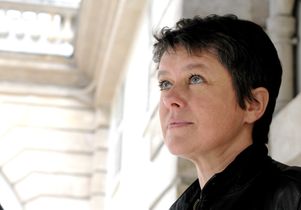 The election pits a very young candidate (by French standards), 39-year-old Emmanuel Macron, who only recently created a new political movement, and seasoned politician Marine Le Pen, who leads the nationalist — some  have said xenophobic — Front National. She and her party are frequently accused of racism, Islamophobia and anti-Semitism.

Murat took a few moments to answer some questions from UCLA International Institute writer Peggy McInerny about French politics and the future of Europe.

What do you consider their relative chances?

Since the Brexit vote and the U.S. election, everyone has learned to be extremely cautious with predictions. Nevertheless, it seems very likely that Macron is eventually going to win. But if Marine Le Pen doesn’t win this time, she is going to win the next election. Why? Because the barrier against the far right has been chipped away.

On the far right, Nicolas Dupont-Aignan of Debout La France, received almost 5 percent of the vote in the first round, and he swore he would never negotiate with the Front National. Yet, he just agreed to become Marine Le Pen’s prime minister in case of a victory — an official decision that caused the two vice presidents of his party to resign on the spot. Dupont-Aignan also recommended that his followers vote for Marine Le Pen in the second round.

On the far left, Jean-Luc Mélenchon, who received almost 20 percent of the vote in the first round, said he won’t vote for Marine Le Pen, but didn’t call for his supporters to vote for Macron, which is extremely problematic. On the conservative front, some leaders in Fillon’s Parti républican have not urged people to block Marine Le Pen. And we know that 30 percent of the people who voted for Fillon will cast their ballot for her party, the Front National.

This is the first lesson of these elections: Fascists gained legitimacy. Marine Le Pen’s efforts to undo the demonization of her party eventually worked.

Today, everything basically depends on how Macron wins. Actually, it is a zero-sum game because he has no constituency and no majority. If he wins 52-48, he won’t have any legitimacy, and it will be very hard for him to govern, with no real party behind him and no majority in the parliament. If he wins in a landslide, such as 60-40 or by an even greater margin, it will be interpreted as a rejection of the Front National and not as an endorsement of his proposals. In any case, it will be a victory “by default.”

Macron (nicknamed Micron), who is very young and who has basically no political experience, is in an extremely tricky situation. He represents — at least on paper — the center, an ideology that has never been implemented in France. Weirdly enough, this idea of “neither left, nor right” has a chance now. France always wants to follow its own path — apart from the U.S., the globalization camp, etc. The Brexit vote and the Trump election definitely encouraged some French voters to support Marine Le Pen, but they frightened many more.

What are the major issues that are driving people to vote in the election?

Unemployment and terrorism, both linked to immigration and racism, are the major concerns. But the responses voters are looking for are populist and/or radical ones. Macron, the “centrist,” came in first in the first round of voting, but the three other candidates who each got around 20 percent of the vote (Le Pen, Fillon and Mélenchon) offer brutal solutions — to brutal issues. 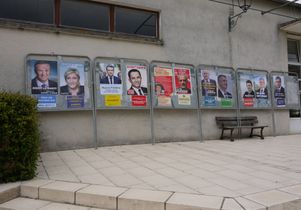 The program of Benoît Hamon of the Parti socialiste was rather bold and interesting, both socially and economically. Specifically, his proposal for a “revenu universel” (universal or basic income) was new, a policy idea that the state of Alaska, Germany and Finland have experimented with. But Hamon’s lack of charisma, his refusal of a “cult of personality” and the fact he belongs to the Parti socialiste — in power for such a long time — led to total failure. He received around 6 percent of the first-round votes, which is the worse score ever for the Socialist Party since its founding in 1969.

We are witnessing something totally new in French electoral politics. Four candidates each received around 20 percent of the vote, when usually two candidates (the remote equivalent of Republicans and Democrats in the U.S.) get close to a 50-50 split. I am personally very open to new ways of conducting politics. But the change we are experie2ncing all over the world is extremely worrying. And it is all going in the same direction: towards authoritarian regimes or dictatorships. In that regard, one can be “relieved” that Macron came in first as a mere victory for democracy. But for how long?

As a Paris native and French author who teaches in the U.S., you have witnessed the election of a nationalist, populist leader in the United States. How does that experience inform your view of a potential win by Marine Le Pen in France?

When you look at the electoral map, the comparison with the U.S. election is very striking. Marine Le Pen won all the rural regions. Exactly like Trump, whom she admires and tried to meet when she was in New York City.

What happens in the U.S. usually happens in France 10 years later. That said, Marine Le Pen is not a “French version” of Trump. She was born and raised in a political milieu. A lawyer, she is extremely articulate and eloquent. But mostly she is an ideologue. Trump was a huge surprise for a majority of people, as he was not a professional politician. Marine Le Pen is.

I have been watching the rise of the Front National since I was kid. It received 0. 8 percent of the vote in the French presidential elections of 1974 and has grown dramatically since. For the second time in the 21st century, the party is now the main challenger in the second round of the presidential election. I would not be surprised to see Marine Le Pen become the president of France in five or 10 years. It is a considerable threat that would end the EU.

Note: The Center for European and Russian Studies will hold a “Debrief on the French Presidential Election” on Thursday, May 11, at 12 p.m. in Royce Hall, Room 236. The featured speakers will be Nicolas Bancel, UCLA visiting professor of history; Dominic Thomas, chair of the UCLA Department of French and Francophone Studies; and Murat, director of the Center for European and Russian Studies. Admission is free and open to the public.