Car owners were reunited Tuesday with the vehicles that were damaged by the water main break that inundated two underground parking structures at UCLA last week.

Despite coming face to face with their destroyed property for the first time, most of the vehicle owners were calm. UCLA staffers escorted them to soaked sedans, motorcycles and SUVs, answered questions and helped the owners file claims with on-site insurance agents.

“I did expect to find my car totaled, but it's still sad to see it because it’s a new car and I really liked it,” said Rosie Barrera, an assistant buyer in the UCLA Store. Her 2013 Toyota RAV 4 was covered in mud and full of moldering puddles. "At least I knew what to expect from all the info on the [UCLA] Facebook page and the emails from Transportation. It's an unfortunate disaster, but UCLA has done a great job of handling it from start to finish.”

At a tent that served as a command center, UCLA Transportation checked people in and helped them to locate their car among the 340 most-damaged vehicles that had been towed to a parking lot at Jackie Robinson Stadium. UCLA arranged for agents from a half dozen insurance companies to be on-site, along with representatives from the Los Angeles Department of Water and Power, which owns the 93-year-old water pipe that burst. UCLA also provided shuttles for car owners to get to the lot, free passes on public transit, insurance counseling, and even water and sunscreen. A UCLA Facebook page devoted to the flood provided rapid-fire answers to questions in real time.

“We’re trying to make it as easy as possible on everyone,” said UCLA Transportation Director Renée Fortier. “This has been a remarkable and concerted effort by the whole campus.”

UCLA Transportation has become a 24/7 operation, Fortier noted. The department contracted with a towing agency, and with 11 trucks managed to move up to 20 cars an hour out of the flooded garages as the water receded. Once tow trucks reached the lowest level, where water had reached as high as 8 feet, towing slowed when mud and debris became so troublesome that some cars had to be relocated with a forklift before the tow truck could reach them.

Water is believed to have leaked into all of the cars that were taken to Jackie Robinson Stadium. Many car owners faced the sour smell of mold and mud when they opened their car doors for the first time. Hoods, too, were caked with flaking mud and leaves, cup holders held standing water, and glove boxes added insult to injury with miniature deluges revealing ruined paperwork. But among all the ruin were occasional clean, dry vehicles.

"I think it's in good shape," said Jessica Settles, an administrative assistant in the Bruin Card center as she eyed her 2009 Toyota Corolla. “It looks fine, there's no water inside and it doesn't smell," she said with a smile. 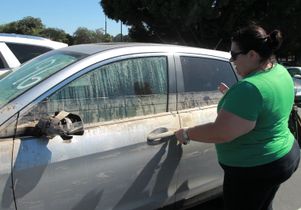 Her insurance carrier warned her to tow the car to a mechanic before driving it, just in case, so she’s stuck in her rental car a while longer.

Several Bruins were greeted Tuesday by Nurit Katz, UCLA’s chief sustainability officer, who they have come to know through her responses to questions on the UCLA Facebook page for flood victims. Katz gathered information from multiple departments on campus and funneled it all to one place, so car owners would know how to register their vehicles, when and where they could inspect their cars, and other resources.

The Facebook group was one of Kyle Hasenstab’s main sources of information, said the UCLA graduate student. Hasenstab found his 2010 Toyota Yaris covered in debris, soaked and smelly.

“Normally I carpool with my wife, but coincidentally I didn’t that day,” Hasenstab said. It’s only because it’s summer that his wife parked in an above-ground lot that day, he said. “Fortunately I got my laptop out of my car, or I would have lost all my research. I kind of panic when I think about that.”

Though he bought the Yaris new in 2010, like many affected Bruins he plans to look for a used car this weekend, knowing he might not get enough money from insurance to get a new car. He’s been grateful to hear that UCLA is helping provide loans as drivers look for new ways to get to campus.

“UCLA has been really good about finding ways to help us,” Hasenstab said. “They were really on top of making sure that faculty and advisors knew this was happening, and asking them to go easy on us and give us time off with pay if we needed. I didn’t need it, but it helped to know it was there.”