When UCLA historian Jon Christensen visited Berkeley last weekend with his daughter, Lucia, they both knew they wanted to do something outdoors together. But she, a 22-year-old undergraduate and seasoned backpacker, was in the mood for a strenuous hike, whereas he, worn out from a week at work, wanted to sit by the ocean and chat.

They reached a compromise with the aid of CaliParks, a new smartphone-friendly website that directed them to a 3 1/2-mile trail from Green Gulch to Muir Beach in Golden Gate National Recreation Area, in Marin County.

“All the information is available on different websites, paper maps and trailhead signs, but to go to just to one place and look for a nearby park with the activities we wanted was very convenient and easy to use,” said Christensen, adjunct assistant professor in UCLA’s Institute of the Environment and Sustainability, history department and Center for Digital Humanities.

Which is to say that the site, which launched this week, worked precisely as Christensen had envisioned it would.

Two years in the making, CaliParks is the outgrowth of Christensen’s research on the plight of residents of park-poor neighborhoods and dwindling support for parks at a time when California’s demographics are changing dramatically. Christensen also conceived of the project and directed the software developers who built the site at the San Francisco data visualization firm Stamen Design, where he is a partner.

CaliParks is being billed as the first park-finder to cover every park in the state — 11,826 parks in all — while using social media and park activity data to enhance users’ experiences.

“It’s like the Waze for parks,” Christensen said. “It helps you get to the places you want to go and it’s using information from the crowd to help you make better informed decisions about where you can go to do what you want to do.”

CaliParks, which can be used in either English or Spanish, provides information on the types of activities offered in each of California’s national, regional, state and urban parks as well as directions for getting there and maps to parking, picnicking, trails and other features. Links with such social media sites as Facebook and Twitter allow park users to connect with friends and family.

“You can click and say, ‘The surf’s up at Dockweiler — come on down,’” said Christensen. “It tweets or shares a link to the park you’re in and directions on how to get there.”

Designed to work easily on desktop computers, tablets, and smartphones, the site allows users to find parks by proximity to any city, zip code or address. The site can also detect a user’s location and suggest parks nearby. People can also browse parks according to the activities they offer, including backpacking, rock climbing, wildlife-watching and picnicking.

Previously, detailed information on individual parks could be obtained only by looking at the websites for each agency or park. The sites were not interconnected, and they tended to be developed more from the perspective of the land-managing agency than the end user.

“Before, you’d have to know what you were looking for before you were able to find it, which doesn’t help if you, say, want to figure out where to go mountain biking this weekend,” Christensen said. 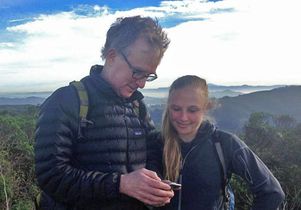 CaliPark’s launch came on the heels of a critical report by the Parks Forward Commission, an independent panel of leaders across the state charged by the governor and legislature to review the future of the state’s 279-unit park system. Calling for a “fundamental transformation” of California’s state parks, the report highlighted the need for increased use of technology to connect Californians with their parks and to engage younger generations and underserved communities.

“Jon played an essential creative role in figuring out the problem — why most young people don’t know where our redwoods and hiking trails are and how could an app fill the vacuum,” said Parks Forward Commissioner Michael Woo, dean of the College of Environmental Design at Cal Poly Pomona. “He embodies this rare combination of technological expertise and an appreciation for our park system, and he has his finger on the pulse of the target audience.”

Parts of California, including Los Angeles, rank among the most park-poor in the nation, and disadvantaged neighborhoods are the most affected. And California’s parks are used less by Latinos, African-Americans and Asians than by white Californians, even as the state’s minority population is climbing. Members of the millennial generation also use parks less frequently than older Californians.

The CaliParks site displays a constantly changing stream of images from nearly half a million social media users on the photo-sharing sites Flickr and Instagram, showing a diverse array of Californians enjoying the state’s parks.

“When people don’t think that they will see people like themselves in parks, that’s a barrier to their going to parks and feeling welcome in them,” Christensen said. Social media, he found, can challenge these assumptions. “While it’s true that attendance at parks is not representative of California’s diversity, nevertheless if you look at social media, Asians, Latinos and African Americans do go to parks and share their images. And I realized we could lower an important barrier by sharing these images and thus creating an invitation for all Californians to enjoy our parks.”

Built with support from the Resources Legacy Fund, a conservation-minded nonprofit, the site incorporates existing data from government supported websites such as the California Protected Areas Database, as well as privately developed sources such as GreenInfo Network and Hipcamp, which incidentally was founded by UCLA alum Alyssa Ravasio, who graduated in 2011 with a B.A. in digital democracy. It also links with trip planner technology from Apple and Google.

In the future, Christensen said, CaliParks may be available as a native app for iOS and Android, which would give smartphone and tablet users access to park data even from locations too remote for wifi or cellular signal.

Meanwhile, Christensen is most excited about the way in which CaliParks mobilizes scholarship to address the needs of the community.

“It’s so gratifying to have traveled the whole distance from research to fully engaged policy and practice,” Christensen said.