Brandon Rice was an all-star wide receiver, first at Beverly Hills High School and then at UC Davis. He was drafted into the United Football League, but long-time knee issues ultimately ended his gridiron aspirations.

Patrick Hill was an award-winning fullback at the University of Miami and then played with the Tennessee Titans for two years before ultimately having his position cut from the team.

Both men were looking for new paths and ultimately gravitated to a new beginning at UCLA’s School of Nursing. But they didn’t leave the lessons they learned playing football on the ﬁeld.

The former athletes, now second-year students in the nursing school, are part of a trend that has seen the number of men pursuing nursing careers jump by nearly 10 percent in the past 40 years.

Rice was in limbo when he decided to move on from sports after years of suffering from tendonitis in his knee.

“Every athlete goes through that, once you decide you are done with the sport,” Rice said. “Ten years of my life was dedicated to the sport. So then I had to ask myself: Should I use my major (exercise biology) or something else? I knew I wanted to be in the medical ﬁeld because I enjoy helping others. So that’s what interested me in learning about being a nurse.” 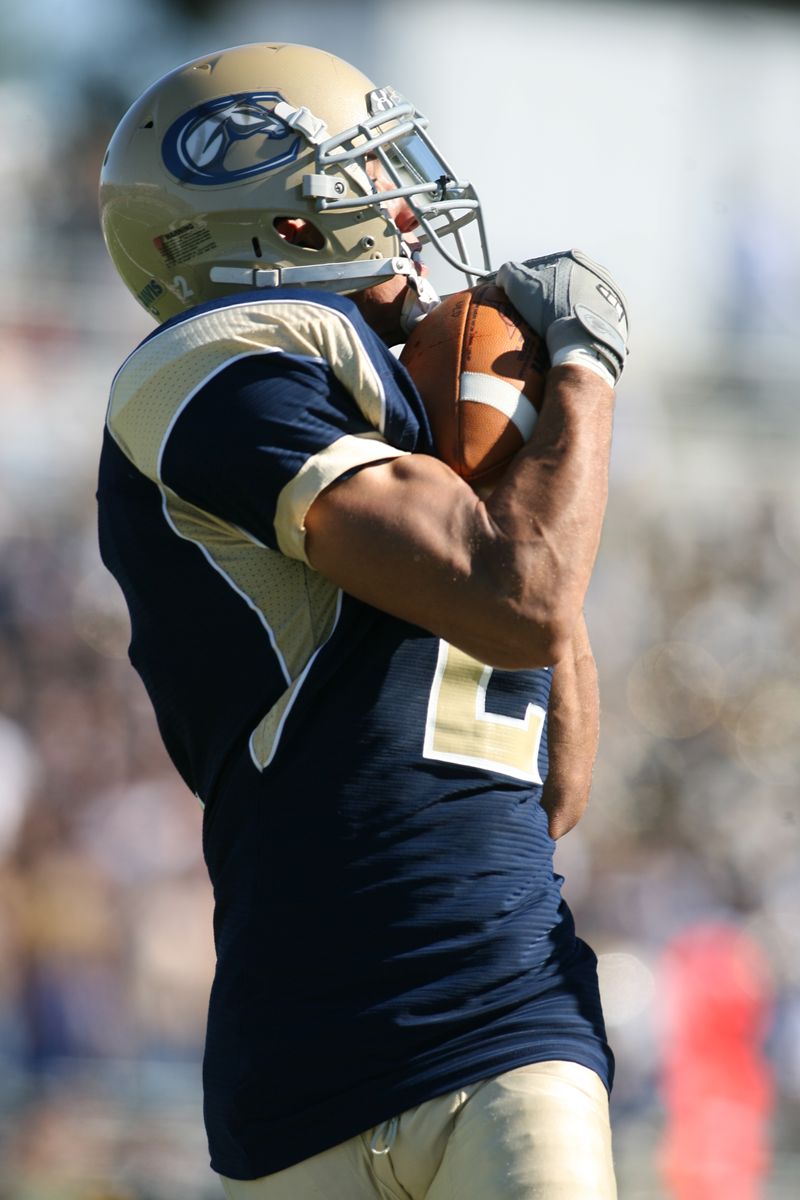 But Rice still wasn’t sure about leaving football behind for good. “I started working in an assisted living facility and I really liked it,” said Rice. &ldquoI was telling one of the residents that I was thinking about trying to go back to football, and she said ‘No you need to become a nurse. You’re good at this.’”

Hill also felt a calling to the field. “My aunt was a nurse and I found myself gravitating to volunteer in hospitals when I was in college, so I had that interest. I had earned two degrees at Miami (a bachelor’s in exercise physiology and a master’s in liberal arts with an emphasis in education), but wasn’t interested in pursuing either.

“When I applied to nursing school here, I had three football teams who had expressed interest in me,” said Hill, after he was cut from the Tennessee Tians. “I have a chance to play, and I have a chance to go to school. When my 6-year old son realized that getting selected by the football team was not guaranteed and that he was not going on the road with me, he told me to choose nursing.”

Most athletes don’t think about what life will be like when a sports career comes to an end, they said.

“Education gets you so much further,” Rice said. “It gives you so many more opportunities. And it is hard to focus on both, so for most athletes, academics is secondary. But there are a variety of circumstances that can happen, so having a degree gives you a choice. Most athletes only play in the NFL for three years. Then what?”

Both nursing students said that their early interactions with nurses before getting into school gave them the wrong impression that nurses had it easy.

It wasn’t until Rice got a job as a unit secretary at Resnick Neuropsychiatric Hospital that he witnessed ﬁrsthand how hard nurses worked. “They made it look so easy. And it wasn’t until I got here that I found out how much knowledge is needed to perform the tasks to take care of patients,” he said. “Getting into this program really gave me a newfound respect for the intellect behind nursing.”

Hill added: “I thought that nurses were kind of like the water boys of football, but I realized that nurses are the coordinators. And they are really the ones that make sure the patient gets better. And if something isn’t working, they make the game play — they call the audible to make sure everything runs smoothly.”

Rice saw another football similarity: “The way that Peyton Manning commands the huddle is equivalent to a charge nurse on the ﬂoor — leading the team and making necessary changes throughout the game in an effort to attain a common, ultimate goal.”

Surprisingly, both have found that their former pals on the ﬁeld applaud their decision. “And we’ll be happy to talk to any college athletes about nursing,” Hill volunteered.

Following commencement, both are interested in working in the ICU. But neither one is planning on resting on their helmets. Both are looking at further nursing education when the time is right. In the meantime, they’ve hung up their jerseys and replaced the pads and cleats with scrubs and a stethoscope.

This story is adapted from the Fall 2015 issue of UCLA School of Nursing magazine.