If your neighbors can see your political participation, does that change how you participate in the political process?

That’s the question behind a pair of large-scale studies from UCLA Anderson’s Ricardo Perez-Truglia, who explored how social influences affect political contributions and, by extension, other kinds of political involvement. This research shows that social pressure does matter and that it matters in decidedly partisan ways.

Understanding political-social dynamics is especially important now, amid an increasingly partisan political system and the hyper polarizing candidacy and administration of Donald Trump. In the words of Harvard legal scholar Cass Sunstein, &ldquo;partyism” has become even more pronounced than racism in determining how people interact with one another.

In Perez-Truglia’s first study, published in the Journal of Political Economy with Guillermo Cruces from the National University of La Plata, a large-scale field experiment was conducted. The researchers used public Federal Election Commission data to identify 91,998 people from all states who had contributed at least $200 to a presidential campaign between April 2011 and April 2012 — roughly the first half of the 2012 presidential campaign. The authors then sent letters to each of these 91,998 subjects, who had contributed about $500 on average. These subjects were randomized to receive different types of letters, each containing different pieces of information. The letter types were designed to test how people react to being observed by others (”conformity“) versus observing others (”comparison“). During the second half of the 2012 presidential campaign, the authors used FEC records to track how the letters influenced subsequent contributions to Barack Obama and Mitt Romney.

A central theme of the “conformity” effect is the belief that people, your neighbors in this case, treat same-party supporters better than other-party supporters. That means, for instance, that in order to avoid social fallout, a Democrat living among mostly Republicans might not contribute to her party’s candidate.

Letters in the “conformity” arm of the study noted the public nature of contribution records (donor name and address, amount given and name of candidate are all public on donations of $200 or more) and explained how to access the FEC’s online search tool. Each letter then went on to demonstrate just how public the data is — by listing the recipient and five other contributors living nearest to them, along with party affiliations and amounts given.

Amount raised by donation size per candidate in 2016 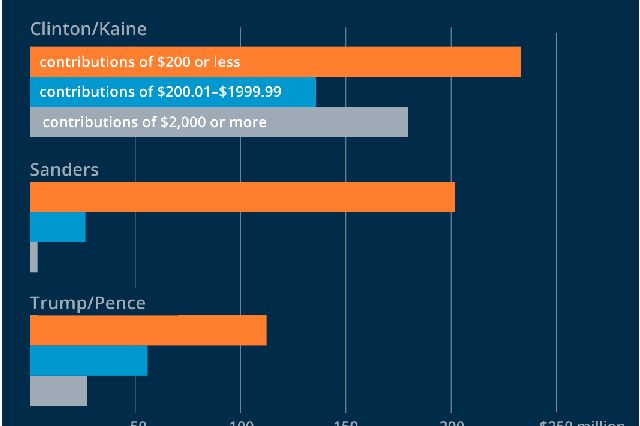 So the kicker with this letter is that recipients were randomly assigned to one of two groups and told which group they were in: households that would receive the only such letter in their given area, and households that would be one among many to receive the letter. That second group, of course, was supposed to think that neighbors would likely see future contributions, too — a key difference for testing how people react to being observed by others.

Letters in the “comparison” arm of the study, meanwhile, also provided information about public FEC records, but this time listed a broader array of neighbors. By choosing a random sample of neighbors to list in the letter, the authors created random variation in the information shown to each recipient of the letter. The idea here was to test whether future contributions were influenced, not only by being observed by neighbors, but by observing and reacting to the contributions of neighbors. The expectation: If people you identify with give more, you also should give more. And if they give less, you might feel it’s OK to give less.

Once again, the results matched up: For every additional $100 above the party’s average contribution given by same-party neighbors, letter recipients’ own contributions increased by $13.60. And there was no increase when opposite-party neighbors gave more.

An interesting caveat: In cases where there were higher numbers of same-party neighbors relative to opposite-party neighbors, letter recipients gave less, not more. The authors say this can be interpreted as free-riding behavior; that is, ”My friends have it covered.“

Prior to this study, political scientists had uncovered evidence on the power of social pressure and social norms for voting turnout. In a famous 2008 study, Professors Alan Gerber, Donald Green and Christopher Larimer sent letters close to Election Day, listing neighbors and previous turnout histories and promising to publicize future voting behavior. As you might expect, voter turnout soared. Unlike other forms of political participation, however, the act of voting doesn’t reveal party affiliation. As a result, the social effects on voting turnout are non-partisan. The study by Perez-Truglia and Cruces shows that social pressure can affect political participation in decidedly partisan ways.

In the second study, forthcoming in the Review of Economics and Statistics, Perez-Truglia reinforced his case by showing that people are more politically active when they’re in like-minded social environments.

Using data from the Federal Election Commission and the U.S. Postal Service, Perez-Truglia identified 45,108 people who contributed more than $200 to Barack Obama’s 2008 campaign and then changed their address either between 2008 and the beginning of the 2012 election cycle, or after the 2012 election had concluded.

Some moved to regions with more Democrats, some to regions with fewer. Perez-Truglia’s research shows that after moving to a more Democrat area, the Democrat mover starts making higher contributions. Perez-Truglia uses rich data on the timing of the moves and the contributions to show these are not just correlations, they reflect causal effects of the social environment. He found that increasing the share of Democrats by 1 percent increased contributions to Obama by 0.11 percent. Thus, moving an individual from an area with 45 percent Democrats to an area with 90 percent Democrats increased her contribution by nearly $250. And the longer people spent in their new area, the greater the effect.

One thing these studies don’t address is how people are influenced by those who matter to them most. Neighbors in close physical proximity are one thing, but what of the friends, relatives and co-workers who live elsewhere and yet are more active participants in our daily lives? Could those social effects be even greater? The authors suspect that indeed they could.