Campus Architect Jeffery Averill has been named a Fellow of the American Institute of Architects (AIA) for his contributions to the profession. He is among 139 AIA members to given this distinction this year. Averill and other new fellows will be honored in June at an investiture ceremony at the 2014 National AIA Convention in Chicago.

“The honor of fellowship in the AIA is one that I share with my colleagues in UCLA Capital Programs,” said Averill. “To me, this represents national recognition of UCLA as a model of a campus of evolving urban density as well as the tremendous quality of its architecture. This work is much bigger than any individual, and the achievements are the result of the collective effort of everyone at Capital Programs, our talented consultants and so many others across the campus.”

A practicing architect with more than 30 years of experience, Averill worked in Houston, San Francisco, Philadelphia, London, Sydney and right here in Los Angeles before joining UCLA in 2001 as project manager to oversee the design and construction of the Engineering V building.

The graduate of Rice University and UC Berkeley was appointed campus architect in 2003. In this role, he provides design oversight for all UCLA capital projects, beginning from the early planning phases through to detailed design and the integration of landscape, hardscape and signage. Over the past 12 years, Averill has led the design of the campus during a period of extraordinary growth when the amount of building space on campus increased 25 percent, from 22.5 million square feet to more than 28 million square feet. 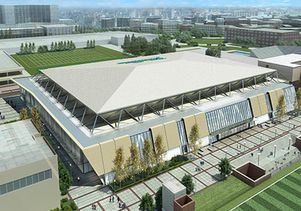 “Being elevated to an AIA Fellow is a tremendous honor that speaks to Jeff’s true talent and professionalism,” said Steve Olsen, vice chancellor of finance, budget and capital programs as well as UCLA’s chief financial officer. “Jeff has guided UCLA through unprecedented structural growth and development, and he has done so as an advocate for contemporary 21st century design while respecting the context of the existing campus and its historic structures.”

Buildings that have been constructed during this time include numerous new residential buildings, the Edie and Lew Wasserman Building, the Court of Sciences Student Center, the Terasaki Life Sciences Building and the California Nanosystems Institute, to name a few. Projects currently in progress include the Teaching and Learning Center for Health Sciences, The Meyer and Renee Luskin Conference and Guest Center, Engineering VI, and the Evelyn and Mo Ostin Music Center. Averill also played a critical role in the successful renovation of iconic campus buildings like Glorya Kaufman Hall, Myra Hershey Hall and Pauley Pavilion.

In addition, Averill has been integral to the process of bringing to near completion UCLA’s $2.2 billion seismic retrofit project to improve the safety of 66 campus-owned buildings and structures.

The AIA fellowship program was developed to elevate those architects who have made a significant contribution to architecture and society and who have achieved a standard of excellence in the profession. Election to fellowship not only recognizes the achievements of architects as individuals, but also their significant contribution to architecture and society on a national level. Approximately 3,000 of AIA’s more than 80,000 members have received this national recognition.