UCLA’s campuswide emergency response to Tuesday’s flooding caused by a water main break on Sunset Boulevard looked somewhat like the 15 to 20 million gallons of water that inundated the campus: It was fast-moving, widespread and broadly felt.

Help came from every sector of the campus and many departments — Facilities Management, the Transportation Department, Athletics, Housing and Hospitality Services, Student Affairs, UCLA Police Department and many others — as well as from individual Bruins who stepped up voluntarily to help mop up the mess, give rides home to strangers and colleagues, hand out water, food and comfort to those stranded on campus.

From Chancellor Gene Block and other top executives to an emergency operations group and less formal groups, people on many levels across campus participated in a massive emergency response effort, pitching in to help ensure safety and ease inconveniences.

As water cascaded into Parking structures 4 and 7, campus visitors milling about in Bruin Plaza with no idea of where to go were greeted by a contingent of students and staff from the Community Programs Office (CPO), located on the plaza. They passed out bread, snacks, bottles of water — anything they could find on the premises — throughout the evening for about 250 people who came by the Student Activities Center.  Most of the CPO staff couldn’t go home because their own cars were unavailable, said CPO director Antonio Sandoval.

“When we saw families and children out there who just didn’t know where to go, our associate director Thuy Huynh suggested we start giving them water and food,” said Sandoval. Once their own larder emptied out, staff went over to Ackerman to purchase 100 tacos and all the chicken sandwiches they could buy.

To give people a place to wait, CPO opened its office lounge to stranded strangers so that they could watch TV newscasts of the event. When word came through that emergency transportation and housing were being made available, students and staff escorted visitors over to Transportation Services and De Neve Plaza, where 22 stranded campers, staff, students and visitors stayed overnight as UCLA guests.

“I think we made people feel at home so they were less angry,” Sandoval said. “There were students who helped us carry food out there, and I didn’t even know who they were. It was incredible.” 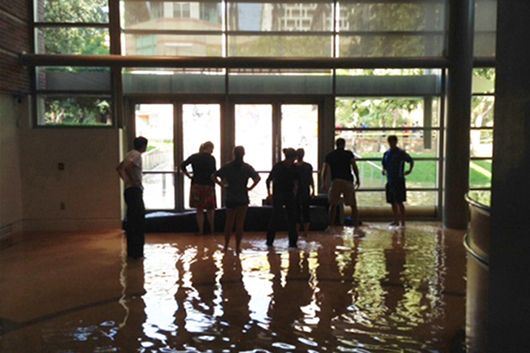 Inside the flooded lobby of the Hall of Fame in the Morgan Center, staff watch the floodwaters outside rise.

Facilities Management staff worked throughout the night clearing water from campus, but had to think fast during the emergency. They scrambled to control the flood’s route by creating trenches in the grass that channeled the water away from the buildings, and used material from Spaulding Field to fill sandbags.

Other staff tried to take immediate action to stem the tide. When water rose to three feet outside the Athletic Hall of Fame in the Morgan Center, about two dozen UCLA Athletics staff managed to keep the flood inside to six inches, according to Ken Weiner, director of business operations. While some used sandbags, towels and cardboard to block the flow, others lined up fire brigade-style to scoop up water with plastic trash bins and heave it outdoors. Meanwhile, Hall of Fame curator Emily Greer and her staff dismantled an exhibit of John Wooden’s den, moving original furnishings and memorabilia to higher ground.

At embattled Pauley Pavilion, “people just came out of the woodwork, diving in and helping in whatever way they could,” Weiner said. At least 50 staff members, student athletes and others spent hours sopping up water from the varnished wood court with brooms, mops and towels. Even UCLA Athletics Director Dan Guerrero was seen working a squeegee.

Other buildings bordering Bruin Plaza were being similarly affected. At the Arthur Ashe Student Health and Wellness (ASHE) Center, water intrusion was also being dealt with. But because the electrical transformers serving the center are located at the bottom of Parking Structure 4, the center also had its electricity cut off, leaving its supplies of vaccines and pharmaceuticals without refrigeration.

“We were ready to move the pharmaceuticals out … but Facilities Management was just great about bringing in a generator and running extension cables to the third and fourth floors to get the refrigerators powered up,” said Nancy Holt, chief of medical services at the center.

With the ASHE center closed Wednesday, medical staff set up tables in Bruin Plaza to do triage in case of injuries, and a temporary urgent care center to serve students was set up in the 200 Medical Plaza. “It’s a great community,” Holt said of the help the center staff received. “Everybody’s coming together.”

Counseling and Psychological Services, located in the Wooden Center, was able to set up an “urgent care” counseling center at the Bruin Resource Center. 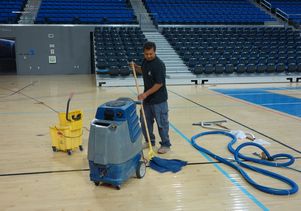 Mopping up at Pauley Pavilion

“We had about 45 people in our lobby at 8 p.m. last night, most of whom were visitors to campus whose cars were trapped; they were from Lancaster, Santa Clarita, Anaheim – all over,” Fortier said. “Our staff – not just our drivers but people who work the front desk – volunteered and were driving strangers home until as late as 11:30 at night. They were just good Samaritans. There was a real sense of Bruin community.”

Other transportation staff stayed late to direct traffic, put up barricades or post notices that the structures were closed, then came in early this morning to help answer questions.

Meanwhile farther down Westwood Plaza, the UCLA Police Department received word Tuesday about three people who were trapped in their car on Young Drive North. As water continued to rise, police dispatch supervisor Eric Dunn stayed on the phone with them to keep them calm while rescue operations were being coordinated. On the scene, UCPD Community Service Officer (CSO) Kevin Nobe, who spotted the car, relayed location information that helped fire department rescuers reach it.

Back at the police station, student Julie Ouyang, a CSO supervisor whose car was trapped, opted to work through the night assisting security officers rather than seek emergency accommodations at a residence hall. “This morning, as people returned to work for the day, she left to get some sleep, but not before she apologized for not being able to do more,” said Nancy Greenstein, director of the Police Community Service Bureau at UCLA.

Among the 22 people who found emergency housing at De Neve Plaza were Beth Schoenborn and her daughter Kelly from Portland, Oregon. They were in California to tour 10 campuses.

“We thought we would be here for two and a half hours,” Schoenborn said with a laugh. Instead, with a rental car underwater in Parking Structure 4, they found themselves with nowhere to go until a student escorted them to the Transportation Office where they found out about emergency housing.

“There were some angry people there, I know. But this was totally out of your control,” Beth Schoenborn said. “Everybody from UCLA that dealt with us was so nice. For customer service, you definitely get high scores, especially under these circumstances.”

For more, see Updated information on water main break for staff and faculty.