Christian Dunbar is a man of many accomplishments in and out of the war zone. A U.S. Navy captain who’s been active on Navy SEAL teams for 22 years, he’s a deputy commander in the Naval Special Warfare Center, responsible for all West Coast SEAL teams. He’s embarked on nearly a dozen deployments, many in combat and most under his leadership.

With master’s degrees in space systems operations and unconventional warfare — which he describes as the “science of counter-terrorism” — Dunbar is currently pursuing an executive M.B.A. at UCLA Anderson. He wants to develop a “sports performance” business in which he’ll work with professional sports teams and apply psychology and behavioral techniques that have worked in military contexts to mitigate negative behavior — specifically, sexual assault and domestic violence.

He’s already had to interrupt his M.B.A. studies once when he took a year’s leave of absence to run special operations in Afghanistan. 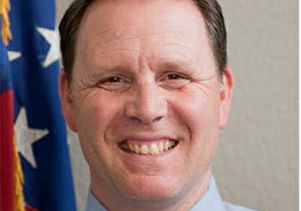 For his solid commitment to service to others and his embodiment of Coach John Wooden's inspiring leadership ideals, Dunbar is one of four Anderson M.B.A. students to receive a John Wooden Global Leadership Fellowship for 2015. Dunbar, along with Tiffany Cantrell, Virginia Tancioco and Robert Douk, will be awarded $25,000 fellowships on Oct. 6 at a gala at the Beverly Wilshire. Anderson will also honor Xerox chairman and CEO Ursula Burns with the 2015 John Wooden Global Leadership Award. Dunbar is also a 2015 Tillman Scholar, one of five UCLA recipients of a scholarship from the Pat Tillman Foundation, which assists veterans and spouses in their academic pursuits.

A third-generation Eagle Scout whose Midwestern parents set strong examples of citizenship and personal responsibility, Dunbar regards his wife and four children, ages 2 to 12, who are at home in San Diego, as his most influential collaborators.

“It takes their resilience, the shared love in the family,” he said, “to be able to succeed.”

An avid reader of classic manuals on leadership, Dunbar read “Wooden on Leadership: How to Create a Winning Organization” on the recommendation of his wife, a former Marine. But his interest in Coach Wooden went beyond the pages of this popular book. Wooden actually had a role in shaping Dunbar’s leadership development and his ability to motivate people effectively after years of managing them.

In 2005, Dunbar changed jobs, jumping from a corporate and policy role in Special Operations Command back into a SEAL team as director and deputy commander of operations. His team was preparing to deploy to Anbar Province, Iraq, in 2006. A senior enlisted adviser shadowing him at the time helped him become aware that, although he was a master of all the tactical and technical components of his work, he might have lost sight of the most effective and intuitive ways to manage, lead and inspire other people.

Dunbar remembered an adage from Wooden’s book: When you think you have all the answers, you’ve stopped asking the right questions.

He took to heart the notion that friendship and cooperation are both foundations of the Wooden Pyramid of Success. “I directly attribute to Coach Wooden my ability to pivot at a pretty critical time, 12 years into the SEAL teams, when I thought I was very successful but was losing touch,” he noted in an essay that was part of his application for the fellowship.

Through what he describes as a circuitous path, Dunbar has found his “next layer of service.” Working as a consultant to athletes and organizations, he helps them find better ways to cope with the stress and the power struggle they deal with on the field.

Dunbar is also contributing his skills in another arena. Alarmed by national statistics that one in four college women will get sexually assaulted on campus, he is now training to become a victim advocate. Dunbar, the father of three daughters, decided to become involved when family friend and UC President Janet Napolitano launched the Task Force on Preventing and Responding to Sexual Violence and Sexual Assault in June 2014.

UCLA has offered him the opportunity to collaborate outside Anderson and network with members of Napolitano’s UC task force, medical care providers and Kathlete Salvaty, UCLA’s sexual harassment and prevention officer and Title IX coordinator.

“The Anderson experience has been amazing for me,” Dunbar said. “I chose to come here.” He says he interviewed at other business schools where the process felt more “cutthroat.” In comparison, the Anderson culture reinforces for him “a sense of purpose, a sense of service.” He said he believes that the Anderson community is interested in the quality of life, within the business school cohort and outside of it.

“When you get to be my age and you’ve been in the SEAL teams for 20-something years … it’s about resourcefulness, it’s about working hard, it’s about a commitment to each other — there are other things in life besides business success.”

This is an edited version of a story that appears in the UCLA Anderson blog.