Laurence D. Fink, chairman and CEO of BlackRock, Inc., and the newest recipient of the UCLA Medal, shared his insights this week on the health and risk factors of the world's largest economies with an audience at UCLA Anderson.

The founder of the world’s largest asset management company — with $4.6 trillion in assets under management — also talked about Americans' retirement savings and the responsibilities of corporate boards during a conversation with Dean Judy Olian on Monday, March 7, as part of the Dean’s Distinguished Speaker’s Series. Following the discussion, Fink, who earned his B.A. and M.B.A. at UCLA, received the university's highest honor for exceptional achievement from Chancellor Gene Block at an event at the Chancellor's Residence.

Fink told the audience in Korn Convocation Hall that China, with the world’s second largest economy, is shifting rapidly out of low-wage manufacturing and needs a new competitive edge. Most economies, he said, need about 50 years to make the kind of transformation China is aiming for, but China’s trying to do it in 10. Make no mistake, Fink said. “All economies have to go through this transition.”

But in order for China to ascend further, he said, it needs to "transform its society into a domestic-oriented service economy,” noting that China must expand health care and establish an ecosystem for tourism. Currently, it’s more affordable for Chinese citizens to vacation abroad in Hong Kong, New York or Los Angeles than stay in their own country. They carry back goods from abroad to China that are too expensive in their own country — sending trillions of dollars outside of China. 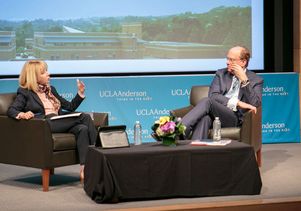 UCLA
Dean Judy Olian and Laurence D. Fink, chairman and CEO of BlackRock, Inc., had a wide-ranging conversation that touched on Americans' retirement savings and the responsibilities of corporate boards.

As in China, there are many in Europe who are currently disillusioned with leadership and are backing proposals to exit the European Union (In the U.K., it's called "Brexit."). Fink sees this kind of move as a disaster disguised as self-sufficiency, and he expressed concern over the volatility of Europe’s demographics, coupled with a weak banking industry and lack of faith in political leadership. People worry that the next 10 years will be harder for their children than the last 10 turbulent years were for them, he said.

While that's not true for the U.S., "a much sounder, safer area than anywhere else in the world,” he said, there is a segment of the population here that feels like it’s getting left behind as well. “The quality of earnings in the U.S. is getting weaker.”

Referencing a retirement survey BlackRock conducted, Fink said that, on average, Americans have saved enough to generate $9,000 per year income for retirement, minus Social Security. The conundrum is that when Americans save at the pump and sock it away into retirement savings, it “dulls down” the economy in the short term.

Still, Fink is pro-savings and, as he has expressed unequivocally for the last few years, stands against the corporate and political short-termism that focuses on immediate gain without a long-term strategy.

Fink believes that the moment-to-moment cycle is a decidedly human tragedy. It would be easier to focus on changes in business's behavior than change human behavior, or, for that matter, the counterproductive short-term tendencies of government, he said. “In the era of activism,” he said, “we need to have boards and their management teams work on illuminating to shareholders what their long-term strategy is.”

At BlackRock, for example, “Out of the $4.6 trillion we manage, $2.3 trillion are index equities," Fink said. "An active manager could sell a company if he thinks it’s lousy. As an index manager, we have to own these companies as long as they’re in an index. So we ask companies to please describe their long-term strategy and how they are going to navigate within the ecosystem of their industry.”

A long-term strategy is the baseline (“I call it an EKG”), Fink said, but once it’s in place as a goal, boards can in quarterly updates see how effectively a company is managing to pivot around that strategy. For Fink, implicit in any strategy is that it be reviewed by a company’s board.

“It will help us guide and understand how to vote in relation to a company. and it will elevate better corporate governance,” he said.

This is an edited version of a story that appears on the UCLA Anderson website.