China’s enormous economic growth over the past three decades has fueled an “age of ambition,” said journalist Evan Osnos during a presentation he gave Oct. 6 at the UCLA School of Law. This ambition is both national and personal in nature: a collective national aspiration to establish a glorious place for China in the world and the individual aspirations of 1.4 billion Chinese people.

A staff writer for The New Yorker, Osnos is also the author of a new book, “China: Age of Ambition” (Farrar, Straus & Giroux, 2014). He took part in a panel discussion cosponsored by UCLA’s Burkle Center for International Relations, Center for Chinese Studies, Asia Institute and the UCLA School of Law. Participating in the discussion, moderated by Burkle Center Director Kal Raustiala, were UCLA anthropologist Yunxiang Yan, UCLA law professor Alex Wang and Jeffrey Wasserstrom, Chancellor's Professor of History at the UC Irvine.

Economic reform and social change have sparked a process of individualization in a society that has long defined the individual in terms of the collective, said Osnos. But although people in China have gained great autonomy to make personal decisions about their lives, this autonomy does not extend to political participation.

In this sense, Osnos said, the recent demonstrations in Hong Kong provide a window into the underlying political, social and economic dynamics of what is occurring in the Chinese mainland.

Prosperity and its impact

When China initiated market-oriented reforms in the late 1970s, said Osnos, the country was poorer than North Korea. Today, China’s sudden prosperity is visible in multiple spheres, with reforms that have enabled people to take their first steps out of poverty. 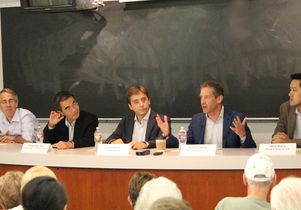 Peggy McInerny/ UCLA
People in China have gained great autonomy to make personal decisions about their lives, but that has not been extended to political participation, panelists explained.

With the world’s second-largest economy, China can now boast of a per capita income that has surged from roughly $200 in 1978 to roughly $6,000 today. The average Chinese consumer now eats six times as much meat as he or she did in 1976, and the Chinese government currently lends more money to the developing world than does the World Bank.

At the same time, there is an enormous gap between the wealthy and the poor in China, Osnos said. The country also remains the world’s largest authoritarian state, with the distinction of being the only state to have a Nobel Peace Prize winner in jail.

In the socialist era, individuals were encouraged to be “the rustless screw in the machine of socialist development.” But economic reform has fundamentally changed that. People reported, for example, feeling “unfettered” by policy changes that have dissolved traditional institutional ties and encouraged them to rely on themselves, Osnos said.

Suddenly, people had two jobs, and “ambition” became a less pejorative term. Choices in love and marriage also became personal when the state consciously freed people from the restrictions of arranged marriages and changed the role of women in Chinese society. Matchmakers disappeared, ceding their role to personal advertisements. “Autonomy,” said the speaker “began to creep into people’s lives.”

Osnos contends that the China of today is now driven by the search for fortune, truth and faith.

Once people acquired a modicum of material well-being in the country, he said, they quickly recognized that their property was not secure. As a result, they can no longer afford not to pay attention to who is making or breaking the rules. Their quest for information —the search for truth — via traditional media, the Internet and social media prompts them to ask deeper questions about morality, values and the ultimate ends of both society and the country.

Those questions in turn have led to a revival of religious expression, he said.

The individual and the state

Momentous economic and social change has created great tensions in the relationship between the individual and the state in China. “People in their daily lives feel this extraordinary sense of possibility about private decisions, about economic decisions, but not about political decisions,” observed Osnos. “And that, for me, is the great unreconciled puzzle in China.”

During the panel discussion, professor Yan said that the Chinese state had consciously pushed the process of “individualization” by reforming state enterprises, introducing market mechanisms and creating new social spaces for the individual.

Yan, director of the UCLA Center for Chinese Studies, noted that the remaking of the individual in China was an ongoing process. “But the Chinese state has drawn a boundary about how far this can go,” he said, noting that the government is not encouraging individualism in the political arena.

Alex Wang, assistant professor of law at UCLA, added, “The state is attempting to use legal tools to unleash the power of individuals within society in support of state goals. The conflict is [that] individuals see this opening … and attempt to use it for their own ends.” In particular, people are taking advantage of this space to press for such things as environmental protection, food safety and product safety, he said.

Osnos pointed out that while people in China do not see the individual and the state in conflict, “People are hugely conflicted about what ambition means. They feel it themselves, they feel it in the world around them, but they feel clearly that this is not a western import … Chinese people’s definition of what constitutes a good life is changing, and we must keep up with it.”

The canary in the coal mine?

Although the demonstrations in Hong Kong highlight tensions that are also present in mainland China, Osnos characterized the situation there as a conflict between the nationalist ethic of the mainland and the global ethic of Hong Kong, whose residents see it as the global city of Asia.

Wasserstrom offered the metaphor of the canary in a mine shaft, noting that the same metaphor was used before Hong Kong became part of mainland China in 1997. Hong Kong has preserved a high degree of freedom of speech — including a critical press and the availability of books not sold in the mainland — by pushing back when China has tried to rein it in. “It is important to see these current protests as following on years of protests, some of which have been successful.” That’s what has in part emboldened people, he said.

Yet Wasserstrom cautioned against looking at the demonstrations as another Tiananmen Square. Wang agreed, predicting that the demonstrations would produce bare-knuckled negotiations between the Chinese government and the protestors, with any results very narrowly construed.

This has been adapted from a story running on the International Institute website. Read the complete story there.