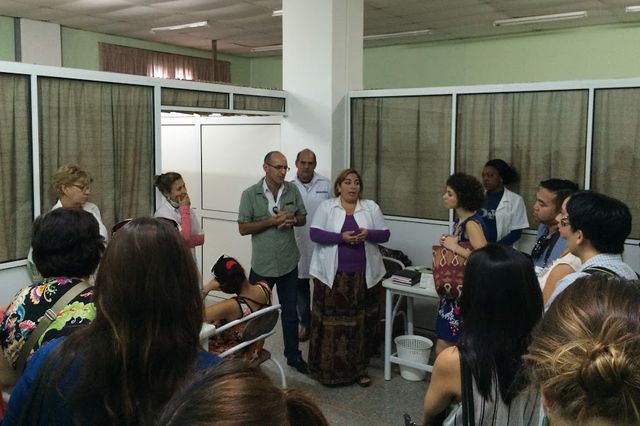 UCLA
Students and faculty from the UCLA School of Nursing visit Casa de Maternidad, where women with high-risk pregnancies can live to receive special care.

The timing couldn't have been better for 18 UCLA School of Nursing graduate students and two faculty members headed for Cuba on an educational mission. As they were boarding a flight to Havana from Miami on Dec. 17, big news was breaking: The U.S. was re-establishing diplomatic relations with Cuba, mending a break that has lasted more than 50 years.

One hour later, the UCLA group arrived in Havana, where they were greeted with exuberant hugs, kisses and tears of joy by an excited group of Cuban health leaders over the historic turn of events. 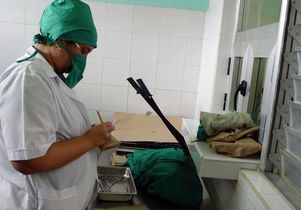 UCLA
A nurse sterilizes instruments at one of Havana's polyclinics.

That was the auspicious beginning of a five-day, action-packed visit for the UCLA group. To learn about Cuba’s health care system, they met with physician-nurse teams, engaged in Pan American Health Organization-based discussions on major causes of illness and death, among other topics; and visited community-based consultorios, polyclinics and sex education centers as well as nursing and medical schools.

Eager to see different health care settings, they spent time at a home for seniors and a residence where women with high-risk pregnancies went to live to receive special care.

Ties between Westwood and Havana

This was not the first time that UCLA nurses have connected with their counterparts in Cuba. In 2011, Maria Elena Ruiz, assistant adjunct professor at the school, attended an International Health Conference in Cuba as a member of the American Public Health Association. Through those meetings, she saw firsthand how a first-world, prevention-focused primary health care system functions with third-world economics.

When she returned to UCLA, Ruiz, together with Adey Nyamathi, associate dean for international research and scholarly activities, developed a program that would provide similar experiences for nursing students, who would receive partial credit for a public health course, complete required readings, participate in pre- and post- conferences, and write daily reflective papers.

How do they do it?

Cuba, the UCLA nurses learned during their visit last December, is a third-world country with some impressive health outcomes, including an overall life expectancy that rivals that in the U.S. (78.4 years for Cubans versus 78.6 years for Americans), immunization rates that are nearly 100% and low infant mortality. Yet their health care costs per capita are nearly 15 times lower than that of the United States.

Primary care and an emphasis on prevention are key to the success of the Cuban health care system.

“Their system shows how primary care really does work,” said student Vladimir Camarce.  “And when implemented correctly, you can see great outcomes. Historically, the U.S. system has been focused on acute and tertiary care, but we are now starting to see a shift with the Affordable Care Act.”

In Cuba, public service announcements about health are shown daily on television. “They don’t have traditional television commercials like we do here, so the government uses the opportunity to deliver messages about hygiene or reminders on vaccines,” observed student Stephanie Phan.

Another reason for Cuba’s success is its focus on personalized, community-based care. Doctors and nurses work as a team and live in the communities they serve.  They might see patients in a clinic in the morning, said graduate student John Scholtz, and then visit patients who can’t get to the clinic at home “to ensure that they are receiving their checkups and following through with the recommendations.”

The students also noted the personal nature of health care in Cuba. “Patients are referred to by name,” said Phan, “not by 'the patient in room 11' …  They told us, ‘They’re not patients, they’re people.”

There is also a strong integration of traditional, herbal and western medicine. It’s all considered good health care. “I believe we should find a way to incorporate that integration into our practices because we do get a lot of patients who use complementary therapies,” said Camarce.

What amazed the students was that the Cubans achieve all this with a scarcity of equipment and health resources. “They don’t have the equipment we have, the technology we have or the pharmaceutical industry,” noted student Jacqueline Marroquin. “They make do with so little, but they are able to accomplish so much.”

“What medical equipment is available resembles a scene from the old MASH television series,” said Ruiz. “And yet we were overwhelmed with the kindness and eagerness of our hosts to share their health experiences with us.”

Also surprising: On average, nurses and doctors make only $20-$30 a month.  But their education and housing are free or subsidized, and they don’t have student loans to pay off.

Part of the reason why the Cuban system works is the collectivist-based culture and the population perspective, the students said. Many things that have been adapted in Cuba, however, wouldn’t work in the U.S.  “We might be able to integrate some of the ideas in a micro-community,” suggested Marroquin.

While the students were there to learn, they also taught Cubans something about Americans.  “Our interactions showed them that we were open to ideas and willing to learn from them,” said Scholtz. On a more tangible note, the group left behind hand sanitizers.  And pens. Lots of them.  “There is a real need for basic hygienic supplies, everything we take for granted,” added Ruiz.

But more importantly, the UCLA visitors came away with a new resolve. “As nursing students, as nurses, we really need to understand what is going on across our borders,” said Marroquin.

Nyamathi added:  “These students are now motivated to make a difference, to learn more about other countries and to question our health system, health care costs, disparities, and what we can learn from others to improve health and health care in the U.S.”

It’s also a hope that, with the dawning of warmer relationships with Cuba, the U. S. health care community may be able to learn a lot more from their neighbor, they said.