Philip Trask has been a butcher’s apprentice, an artilleryman, a telephone lineman and, at one point, a juvenile gang member. But it’s as an instructor and mentor at the UCLA School of Dentistry that the longtime pediatric dentist found a true calling, one that has complemented his years of service to the wider Los Angeles community.

“UCLA is my happy place,” says Trask, 79, who this year celebrates a full half-century of preparing the university’s budding dentists for the profession. “The essence of pediatric dentistry is to teach. Giving the gift of knowledge is one of the only gifts you can give that doesn’t diminish what you have.”

One would be hard-pressed to find a dentistry student or resident who hasn’t benefited from the gift of Trask’s expertise and wisdom over the past 50 years, and his influence as a private practitioner, an advocate for children’s oral health and a volunteer dentist for schools, nursing homes and countless other organizations has been felt and recognized across the region.

“I’m just lucky to have the opportunity to continue giving and receiving from the dentistry field, which has given me so much purpose,” Trask says.

It wasn’t an easy journey to find that purpose. Born in Los Angeles, Trask spent much of his adolescence in an orphanage, and by the time he was in high school, he was working in a butcher’s shop to support himself. With no real sense of community, he found the camaraderie he craved in a gang. One thing led to another and before long, he found himself standing before a judge who offered him two options: jail time or the military. Trask ended up serving as an Army artillery operator in Vietnam, where he suffered permanent hearing loss from canon blasts.

But the experience helped him turn his life around. Following his honorable discharge, he put himself through community college by working full time as a lineman for the telephone and gas companies in Los Angeles, eventually transferring to UCLA, then UC San Francisco, where he was admitted to the dentistry program. Dentistry, he felt, was more conducive than medicine — his other preference — to having a family.

It was in 1968, his final year of dental school, that he chanced upon job that would determine the course of his future. While covering for a colleague at a lab that made prosthetic eyes and cheeks for post–oral cancer patients, he was asked to fill in at a clinic that treated infants with cleft palates. “It was something I stumbled upon, but it would forever change my professional track,” Trask recalls. “I’d been planning to become a prosthodontist and work with geriatric patients, but working with young children was uplifting.” 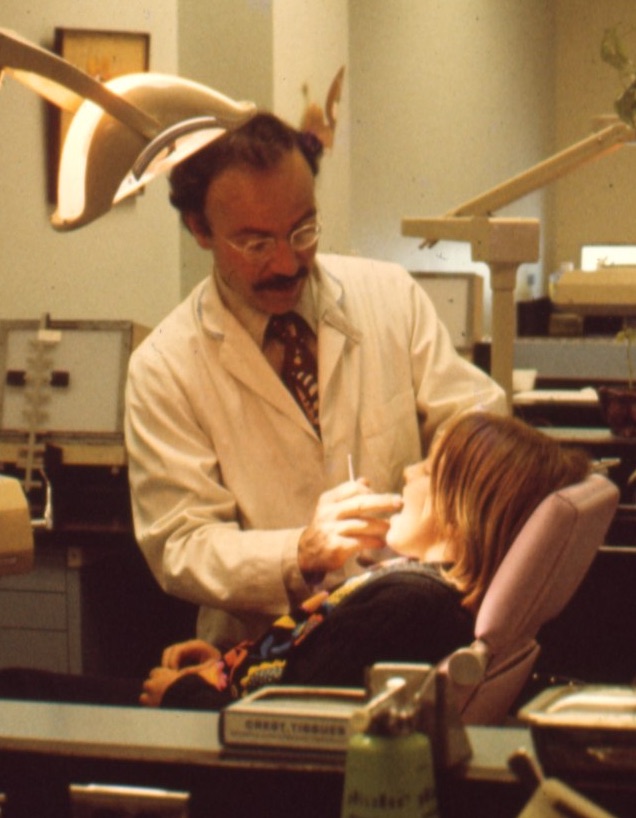 UCLA Dentistry
Dr. Trask treating a young patient at a UCLA clinic in the 1980s.

Within two years, he’d opened a pediatric dentistry practice in Santa Monica, which over the next three-and-a-half decades would grow into one of the largest in West Los Angeles, and had accepted a 20% faculty appointment at the UCLA School of Dentistry, later to increase to 50%.

Trask poured himself into both endeavors with fervor. With his UCLA students, teaching was always about more than skills and technique; it was about life lessons, many gleaned from his own experience. Early in his career, for example, as a long-haired, bearded, tie-dye–wearing young practitioner, he found his patients weren’t heeding his advice. He cleaned up his appearance and focused on ensuring that his patients had a positive experience.

“I quickly realized that I needed to look the part of a medical provider and to concentrate on my doctor–patient communication,” he recalls. “I never had a problem after that, and this is something I try to teach my residents.”

Ronald Bills, one of his former students and the first graduate of the pediatric dentistry residency program, still fondly recalls a nugget of wisdom Trask handed him. “He said to me, ‘Bills, take off your watch. It’s a stressor.’ At the time, I was going through a personal crisis. It meant a lot to me that he took the time to talk to me as a colleague and friend, versus a student talking to his instructor. It goes to show you the type of person he is and how he treats those around him.”

The signature care and attention Trask has always paid to his patients has been mirrored by his unflagging devotion to his students. Over the years, he has worked tirelessly on their behalf, networking, seeking out opportunities and even bringing graduates into his private practice. Trask’s daughter Laura remembers that, “without hesitation, my father would always be happy, no matter what — even staying up long hours — to write personalized job and college-entry letters of recommendations or student evaluations.”

And Trask has never missed on opportunity to bring UCLA’s expertise to the broader community, whether testifying before the Los Angeles and Santa Monica city councils on behalf of the university about the benefits of fluoridated water or working as a supervising faculty member for the past 17 years at UCLA’s Give Kids a Smile events, which provide oral care for children in underserved communities.

“Phil has been a pillar of UCLA Pediatric Dentistry for decades, dedicated to helping residents, students and the children and families who seek care from UCLA,” says Dr. James Crall, professor and chair of public health and community dentistry at the school. “He understands and has modeled what it truly means to be a professional, someone with special knowledge and skills whose mission is to help others. That’s the Phil Trask that I and countless others have known over these many years — a gifted and tirelessly giving friend, teacher and supporter of all things UCLA.” 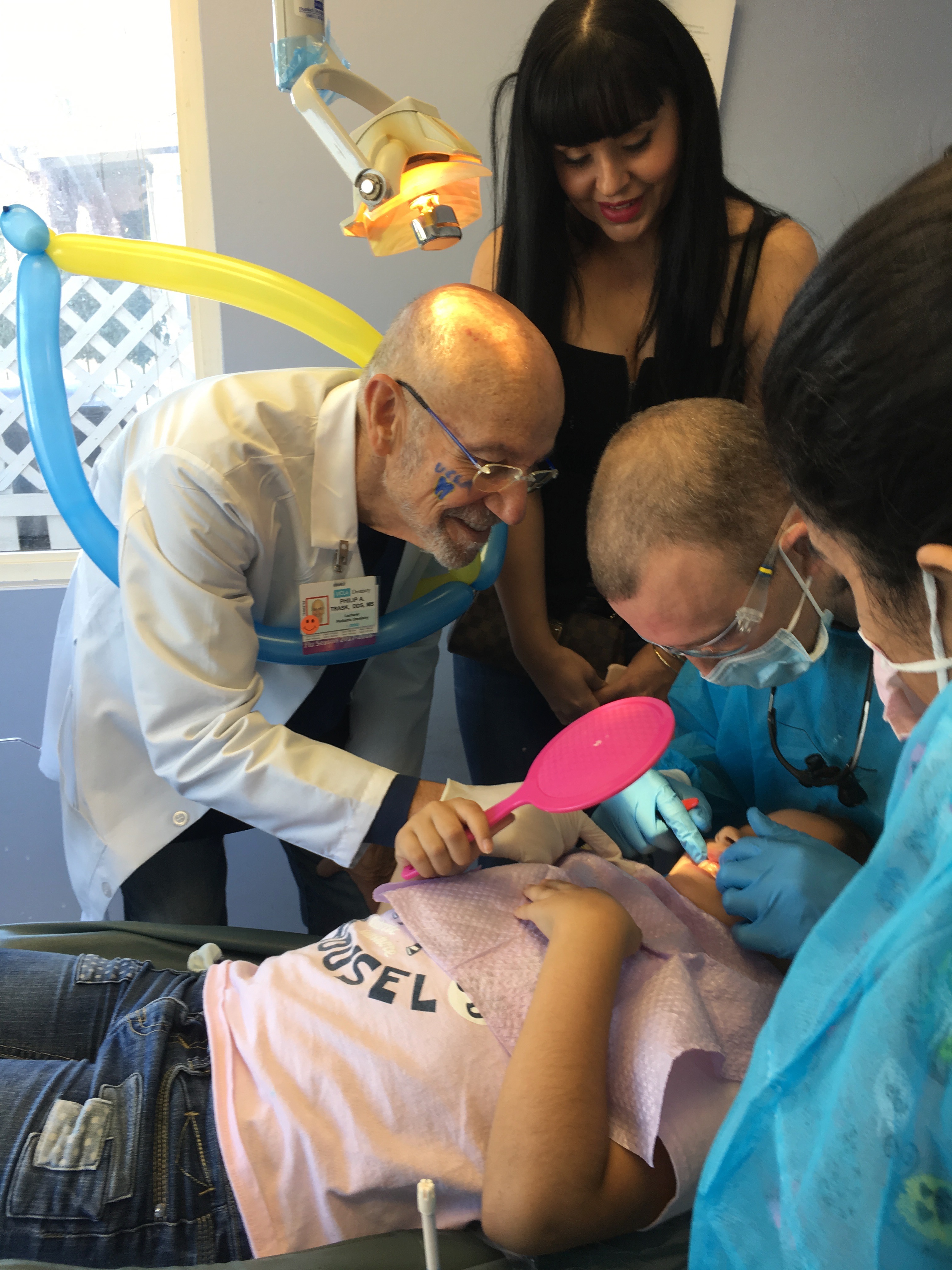 UCLA Dentistry
Dr. Trask with his residents and a patient at a recent Give Kids a Smile event, where UCLA provides free oral care to children in underserved communities.

At the same time, his commitment to serving others has taken him far beyond UCLA. Trask has taken volunteer teaching assignments in Tokyo and Mexico City and has spent time providing dental care on American Indian reservations — the handmade leather jacket with Buffalo nickel buttons given to him by one tribe has become a family heirloom.

Closer to home, he has served as the chief volunteer dentist for the Santa Monica–Malibu Unified School District, dental consultant for the Jewish Home for the Aging and chief pediatric dentist for Vista Del Mar, a Jewish nonprofit and orphanage. He still regularly provides dental care to children with special needs at health fairs hosted by the Friendship Circle Los Angeles and invites his student to join him at these and other events, believing that a sense of altruism is one of the most important qualities future oral health leaders can possess.

And although back surgery in 2005 forced him to sell his Santa Monica practice, he soon launched a new one in Pacific Palisades because he missed treating patients.

It’s a testament to the number of lives Trask has touched that his children still hear his praises sung as they go about their daily lives. “I still randomly come across stories of my father’s work, in the grocery checkout line, at doctor’s appointments, the carwash, the library, wherever,” Laura says. People who have benefited from Trask’s help talk about what a great dentist he was for their kids, how he helped their child get into a residency program. One of the most frequent compliments? Your father has changed my life.

“He loves being a professor, being in service, providing opportunities to help change lives, giving inspiration and building relationships,” she says. “He is an inherent lifelong learner, and being a professor has allowed my dad to selflessly exercise and share this part of himself with his students — it’s his life’s calling.”

For Trask, the best piece of advice he can give to his students and younger colleagues as he prepares to enter his sixth decade of teaching is to always keep their focus on what is most important.

“The most common reward in our society is money and salary,” he says. “Another reward is that which one receives from the hug of a parent or a smile from a child. Giving to those less fortunate is truly better than receiving, and the rewards I’ve received in my career are worth far more than money.”