It’s a heartbreaking task: Once a month, members of the humanitarian group Águilas del Desierto (Desert Eagles) trek into Arizona’s vast and often deadly Sonoran Desert looking for the remains of undocumented migrants who sought better opportunities in United States but never made it.

The volunteers, most of them migrants themselves, come primarily from Southern California and since 2009 have been embarking on this solemn mission to give a measure of peace to families seeking closure about the fate of missing loved ones. The birth of the group came from personal loss: When local officials refused to help find the brother and cousin of Mexican American migrant Eli Ortiz, he and a group of volunteers took the task upon themselves. Four months after the two men went missing, their bones were found.

With research grants from the UCLA Council on Research and the UCLA Institute of American Culture, Kristy Guevara-Flanagan, a documentary filmmaker and professor at the UCLA School of Theater, Film and Television, and Maite Zubiaurre, a UCLA humanities professor, have put a spotlight on the group with their short film “Águilas.” Guevara-Flanagan recently spoke to us about the film and the work of the organization.

How did you first learn about Águilas del Desierto?

My colleague and co-director, Maite Zubiaurre, is writing a book about forensic empathy, a newly coined term that stands for consciousness-raising activism and compassion-triggering artistic practices around migrant suffering and migrant death. She was already familiar with the group; I became fascinated when she told me about them. I thought that filming their search and telling their story could really translate to an audience in a visceral way.

What do you want people to gain from your film?

It’s twofold: I want people to think about the reality of the migration that comes through the desert and why people take such risks, how they must really be in a place with very little opportunity or with a lot of danger. And then, I want them to see that the people doing this humanitarian work are Latinos, migrants themselves, from very humble origins and that they’re still participating in a kind of activism that is meaningful to them.

What does your film say about the immigrant experience in the Southwest?

It says that people will come no matter what and that what our government does has a direct impact people’s lives — literally, they’re life or death situations. Putting up a wall or hiring border patrol to chase people puts their lives at risk in greater, more dangerous ways. Neither one is a solution.

Why has the Sonoran Desert become such a popular crossing point?

Migration patterns since the ’90s have really changed because of security enforcements. This has just caused migrants to go farther and farther east into more dangerous terrain, often with the “help” of coyotes. People are still compelled to cross.

How do the Águilas find out about migrants who have gone missing?

They’re on Facebook, and they post when they’re going to do doing a search. They go to the local swap meets in their area, both to collect donations and to spread the word about the work they do. People call and tell them where their people were last seen. They have a website. The Águilas work with embassies as well. It’s not just Mexicans who are attempting to cross, its people who have traveled all the way from South America or Central America too.

How long are the searches?

They drive out on Fridays after work, spend the night camping and start early on Saturday morning. It’s a full day. They will go out a good eight hours, if not more, on that first day and then Sunday is usually shorter because they have to drive back. 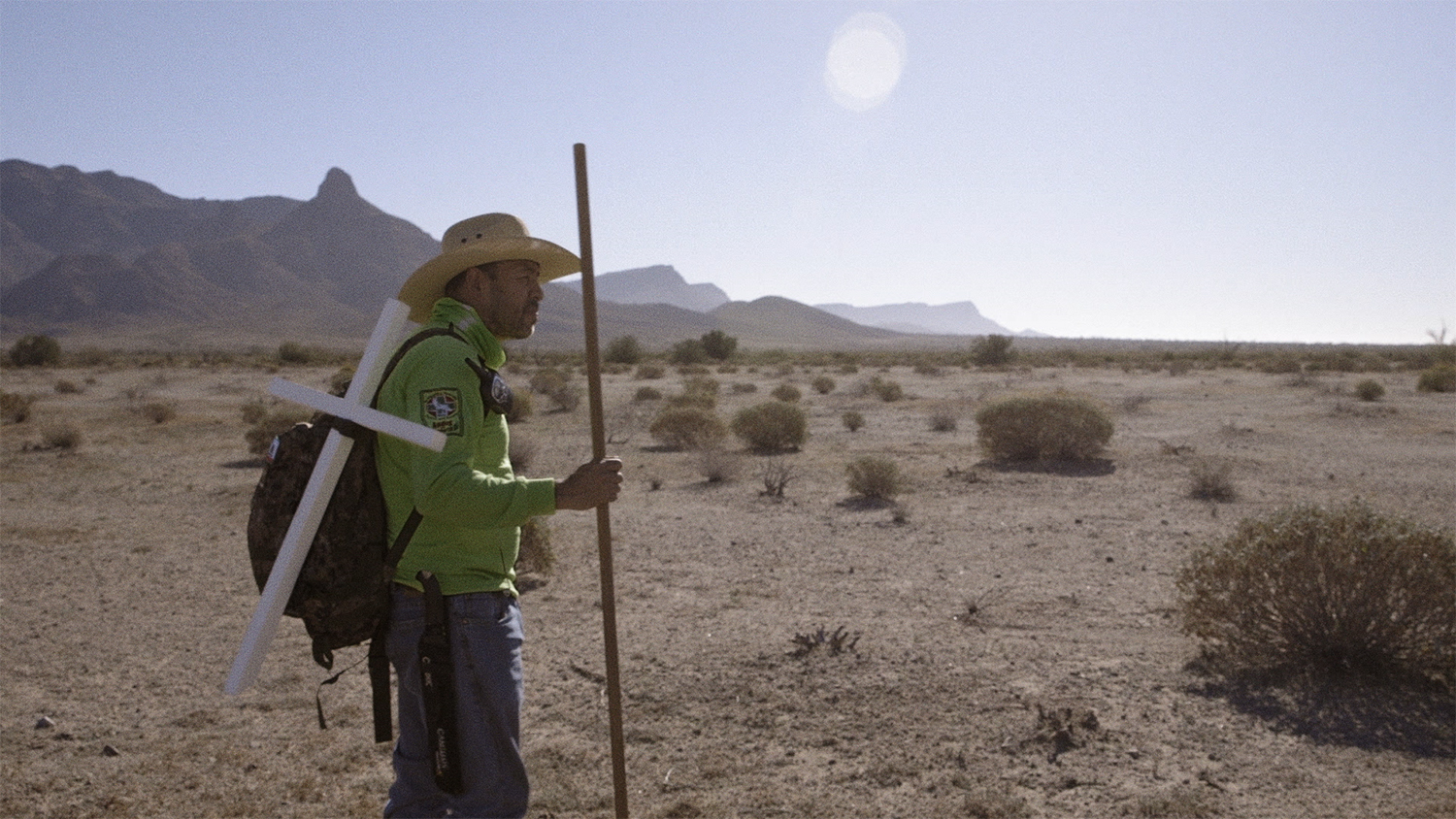 Courtesy of David Marquez
Águilas del Desierto volunteer Mynor Alexander Estrada carries a cross on each search to mark where any intact bodies have been found.

Was there any moment that most affected you during the shoot?

The first time we were there, we found three human skulls. I’ve never been as close to death before. Seeing the clothes and the wallets of these people who perished was very, very surreal and disturbing. It impressed upon me the fragility of life and the risk that people take. It made me think of the desperation they must have to take such risks.

How hard is it to identify people?

The heat ravishes the bodies. So do wild animals that often scatter bones. When it rains in these areas, washes develop and the water throws the bones all over the place too, so it’s quite a puzzle. If they find a skull, they can work with dental records. Finding a wallet is the best-case scenario. When they find remains, or evidence of remains, they must immediately communicate with the coroner’s office in the area so that they can come out and do their follow-up work. Sometimes that takes months.

What were the challenges in making this film?

I brought a graduate student, David Marquez, to do the filming, I did the sound and Maite helped with the interviews. We were prepared to be out there at least 10 hours, but each Saturday ended up being a very long day, probably 16 hours. It wasn’t a traditional film set, obviously. Shooting the search was very difficult because the volunteers didn’t really stop for the camera — they were very focused on their task, of course. The other challenge was that we were all spread very far apart because they were combing the area as they do in a traditional search. The experience really gave me a sense of this landscape and how shockingly treacherous it is.

What did you find most compelling about what Águilas do?

It’s such a big gesture. It’s also not likely they will find the people they’re actually looking for, so it’s a bit of a like a Sisyphean pursuit, right? It’s like finding a needle in a haystack, so what keeps them doing this, time and time again? I think they do it because what else can they do? They have found community amongst each other and a place to be politically active that feels relatable. I think once you go out there too, it feels like, “If I could just spend another hour, walk another mile, I might find something important.” Even if they don’t find family members, people are so appreciative. This is an avenue through which people can have some hope.

April 14: “Águilas” can be viewed on the New Yorker website.

On March 19, “Águilas” won the Documentary Shorts Jury Award at the 2021 SXSW Film Festival, furthering the film’s goal of raising awareness about the need for changes in immigration policy. The documentary was praised as “a film that most poignantly displays the need immigrants feel to come to America — even at the cost of starvation and death.”

On Feb. 25, the film collected the best mini-doc award at the Big Sky Documentary Film Festival. In awarding the prize, the festival jury wrote that the documentary “powerfully encapsulates a complex and ongoing crisis on the U.S./Mexico border … ÁGUILAS quietly but effectively calls out the utter absence of government in their endeavor.”