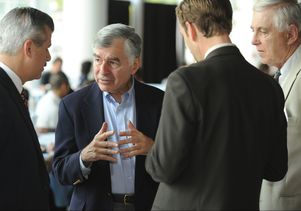 When Michael Dukakis knew that his time as a three-term governor of Massachusetts had come to an end and that he wouldn’t be moving to 1600 Pennsylvania Avenue, the 1988 Democratic presidential hopeful asked himself what he should do next.

With the wealth of knowledge and experience he had gained in successful public service, he decided to parlay that passion into working with young people. His goal: to inspire them to also seek careers in public service. After teaching at Northeastern University for a few years, Dukakis planted his flag at UCLA as a visiting professor of public policy.

This year marks the 20th year that the well-known and oft-quoted politician and professor has been teaching at UCLA Luskin School of Public Affairs during winter quarter. And while many still feel that Dukakis would have influenced history and the country in a powerful way had he won in 1988, his students and former students who have benefited from his mentorship at UCLA say his influence as an educator and mentor has been powerful as well.

“In many ways, working with students is the best thing I do,” Dukakis said recently as he took time to talk about what teaching means to him. “I feel strongly about this country and the world, and the importance of getting young people deeply and actively involved [in public service].”

Thinking back on some of his most memorable experiences teaching at Luskin, Dukakis proudly recalled the day his former teaching assistant, Rusty Bailey, became mayor of the City of Riverside.

“That was his ambition,” Dukakis said. “We spent time making personal contact with every house and every voter. He was elected city counselor, and six years later he was elected mayor.”

Because of the years of mentorship he received, Riverside’s Mayor Bailey said he now patterns his leadership style after Dukakis' own.

“Personal connection and relationships are important to Michael, and he gives his undivided attention when he speaks to people,” Bailey said. “He also is very committed and leads by example ... All of these things have influenced my leadership style in my elected office.”

Bailey likes to cite examples of the former governor’s humility and leadership, including the time when Dukakis left the governor’s office and later asked the U.S. postmaster general for permission to paint over graffiti on mailboxes. “He would go around with a can of paint in his hometown and paint over the graffiti,” Bailey said.

In another incident, Dukakis once declined a flight attendant’s offer of a first-class seat. “He replied without skipping a beat, ‘No, I want to sit in the back with the Democrats.’ That speaks volumes about his character and leadership style. It’s always been about public service and doing the right thing, and not about politics.”

Through his courses, “Institutional Leadership and the Public Manager” and “California Policy Issues,” Dukakis has opened the eyes of many to careers in government and public service. Whether students come in during his regular office hours or contact him from across the country, Dukakis said he always tries to make time for individuals who come to him for guidance.

“Those of us who love what we’ve done … enjoy teaching and encouraging young people to follow in our footsteps,” Dukakis said. “I spend a lot of time with my students to talk about their future.”

In addition to Bailey, Dukakis excitedly recounts the stories of other successful former students. Among them: Veronica Melvin, who leads a nonprofit organization for improving schools in Los Angeles County, and California Assemblymembers Matt Dababneh and Jimmy Gomez, who serve as committee chairs and represent areas near Los Angeles.

When students come to him for advice and mentorship, Dukakis emphasizes the importance of optimism. “You have to be passionate about what you’re doing. You have to hold high standards of integrity for yourself and the people you work with. And you have to be good at bringing people together,” he said.

Ben Kaufman said he was surprised when he first emailed Dukakis with the hope of getting advice on which graduate schools he should apply to.

“I thought it was a ludicrous idea to Google a previous presidential nominee’s contact information, cold-email him, and expect a response,” Kaufman said. “But I did just that, and amazingly, he followed up within a couple of hours.”

The following week, Kaufman said, he had an hour-long conversation with Dukakis during which the seasoned politician recounted old war stories and listened to Kaufman’s plans and goals for the future. After receiving a letter of recommendation from Dukakis, Kaufman was admitted to UCLA as an urban planning graduate student a few months later.

“It’s amazing to me how kind and genuine he is as a person outside of the classroom, no matter whom he is speaking with,” Kaufman said.

Public policy department chair Mark Peterson said Dukakis has been a true asset to the department as a skilled teacher who gives students an unique perspective on politics, policy and public management.

“With a door that is always open, Dukakis avails himself to all who want to discuss current affairs, the coming election, next steps in their education and long-term career choices,” Peterson said. “A devoted friend of the department and UCLA Luskin, Mike's spirit resonates throughout the Public Affairs Building."

“One of the great things about teaching is that you walk into a ready-made community,” Dukakis said. “You become a part of this community… I’ve gained some wonderful friendships (at UCLA).”

Outside of his life as a professor, mentor and public speaker, Dukakis says he likes living in Westwood with his wife Kitty, walking to campus and enjoying the skyline of downtown Los Angeles from his window on clear days.

“Our favorite pastime is taking a brisk two-mile walk down Ocean Drive in Santa Monica and eating oysters by the beach. We know people around the whole region. It’s been really great,” he said. “It’s gratifying to be in a position to encourage young people and inspire them. I’m hoping I’m contributing to this country and the world.”

In honor of Gov. Dukakis’ 20th year as a UCLA faculty member, friends of UCLA Luskin will host a lunch in support of the Michael S. Dukakis Internship in Public Service. The fundraiser aims to raise $250,000 for the internship program and to expand the opportunities it provides for students who are seeking careers in public service. To learn more, contact Melissa Bersofsky at bersofsky@luskin.ucla.edu.

To read the complete story, go to the UCLA Luskin School of Public Affairs website.