During the 1936 Olympics, Adolf Hitler revolted the world with his blatant attempts to capitalize politically on the victories of his “master-race” athletes.

But it turns out that he wasn’t the first strongman to use athletic prowess in an attempt to justify a will to power. 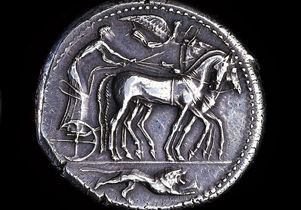 This silver coin from fifth century B.C. Syracuse demonstrates how the city’s ruler Hieron associated victory in chariot races with his administration. Courtesy of the Trustees of the British Museum.

In a forthcoming book, UCLA classics professor Kathryn Morgan shows how a tyrant who ruled an influential ancient Greek colony in the early part of the fifth century B.C. tried to bolster his position by trumpeting the successes of his horses in chariot races.

To be fair to the ambitious ruler Hieron, it was a difficult time to be a monarch in the Panhellenic world when he took charge of the Sicilian city of Syracuse in 478 B.C. after ruling another Sicilian city for seven years. As portrayed in the contemporary “300” movie and its sequel, the Greeks had just resisted a massive invasion by the ambitious Persian king Xerxes at the time. And at the same time, an experimental form of government, called democracy, was gaining traction in Athens.

Since Alexander the Great would not appear on the scene for at least a century, Hieron lacked a role model for empire-building consistent with Greek tradition. So in “Pindar and the Construction of Syracusan Monarchy in the Fifth Century B.C.,” Morgan demonstrates how Hieron attempted to use his victories at the horse track and chariot races for political gain. His successes were trumpeted across all kinds of media for political gain — coins, statuary, buildings and especially works he commissioned from the great lyric poet of the era Pindar.

Due out Feb. 3 from Oxford University Press, Morgan’s book is the product of more than a decade of scholarship in the U.S., Sicily, the United Kingdom and the Netherlands. She is a 19-year veteran at UCLA, where she teaches classical Greek literature and ancient Greek intellectual history. In addition to Pindar, her research agenda includes Plato.

“In ancient Greece, victory and success come from the gods,” explained Morgan, who is the chair of the UCLA Department of Classics. “It’s the gods who give you victory. If you win, that must mean you’re favored by the gods. That’s why it’s so useful politically.”

Hieron was not the first to try to exploit a connection between athletic prowess and the right to rule, Morgan explained. That ploy had been used previously by aristocrats trying to influence local politics, including the late seventh century B.C. Olympic victor known only in history as Cylon, who unsuccessfully tried to seize tyrannical power after his victory. But Hieron took that equation to a new level, she argued.

“In Pindar’s victory poetry, athletic victory is put more generally into parallel with positions of political influence within a city state, but usually the victor is represented as being integrated into a broader community of equals,” Morgan said. “So broadly, Hieron was taking further tendencies that already existed, but he capitalized on them to an unprecedented extent — although with some subtlety.”

The identities of Hieron’s riders and chariot horses have not survived, but the name of his best race horse, Pherenikos (Victory Bringer), still appears in several ancient songs, including the poem "Olympian l" by Pindar:

…if the grace of Pisa, the grace of Pherenikos
suggests to your mind thoughts of surpassing sweetness:
when he rushed by the Alpheos
presenting his body at the racecourse — no need for the goad
and mingled his master with power,
the king of Syracuse who delights in horses.
His fame shines
In the nobly populated colony of Lydian Pelops…

To some extent, Hieron’s approach appears to have succeeded in cementing support for his administration, Morgan maintains. During his 11 years at the helm of Syracuse, he rallied troops to defeat the Etruscans at the Battle of Cumae (474 B.C.); in so doing, he saved the Greeks of Cumae in what today is Southern Italy from Etruscan domination.

Hieron also founded the city of Aetna in Sicily on the site of a previous Greek colony and populated it with people of his own ethnicity, who he thought would be more likely than the original inhabitants to provide him with political support and heroic religious honors. He also filled his court with the greatest poets and intellectuals of his era.

Hieron might even have fulfilled his ambitions to become the most dominant political figure in Greek Sicily and Southern Italy had he not been cut down in a most ungodly manner: kidney stones.

Still, the connection that Hieron and Pindar so deftly exploited persists to this day, Morgan noted.

“It’s a familiar experience to watch coverage of the Olympics today and conclude that, for many countries, Olympic victory is seen as an endorsement of their way of life,” Morgan said. “Even on a more local level, considerable civic pride is on the line when a city’s team wins the World Series, Super Bowl or an NBA championship.”