If your idea of a university librarian is someone who spends days among books and manuscripts in a dimly lit, hidden alcove, think again. Imagine someone with three degrees who is proficient in six diverse languages (and can get by in several more), has traveled six of the world's seven continents and forged personal connections with vast numbers of people, including a Persian scholar, Islamic cleric and Turkish bookshop owner.

Hirsch, who joined the campus in 1989, is the librarian for Jewish, Middle Eastern, Central Asian, South Asian and Armenian studies at UCLA Library.

It’s unusual for one person to have responsibility for so many different regions. But Hirsch’s challenge is not so much multitasking as it is multidimensional and multilingual collecting — a task at which he excels.

Collecting in the most unusual places

To the delight of scholars ranging from political scientists to historians and anthropologists at UCLA and across the country, Hirsch has built an extensive library collection in his areas of interest that few universities can match. 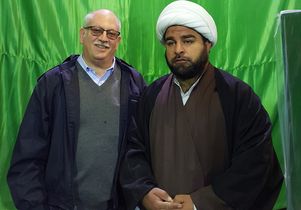 To do that, he has scoured the world in search of books; manuscripts; reports; documents; daily ephemera such as posters, flyers, comic books and self-published magazines; and even textbooks in multiple languages. Hirsch’s broad portfolio and linguistic abilities — in Turkish, Arabic, Hebrew, Spanish, French and Italian with a working knowledge of Polish, Armenian, Persian, Indonesian and Uzbek — lend themselves to his unusual quest.

Discoveries pop up everywhere he travels.  Last December, Hirsch made his way to Iraqi Kurdistan and Turkey. He returned to UCLA with a treasure trove — including more than 200 Kurdish books, copies of the entire run of a Kurdish satirical periodical and a fascinating variety of Turkish youth publications.

Hirsch’s standard on-the-road equipment? A backpack with many foldable, collapsible tote bags — the kind he can to fill with books and other materials acquired from colleagues, research centers, archives, bookstores and nongovernmental organizations.

“It's not always as fun as it looks,” he says. “I get to travel a lot, but being on planes and going through airports can be exhausting. And when I get somewhere, I travel around in regular taxis, or walk and take buses, trains and trams.” 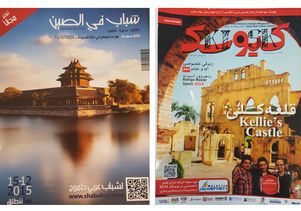 To this eclectic collection he adds materials provided by his many contacts from abroad that make their way to UCLA Library by a network of UCLA faculty, staff and graduate students returning home from distant locations.

From diaspora communities all over the globe, Hirsch has been able to acquire a vast array of reference works, memoirs, novels, poetry, social histories, newspapers, newsletters, academic journals and community publications.

He has met many Armenians and Arabs living in in the Caribbean and Latin America. “There are big Arab communities in Argentina, Brazil and Uruguay. There is a Druze community in Venezuela. Panama also has a big Syrian community, and Honduras has lots of Palestinians.” As for Armenians, he says, “They are all over!”

While in China last September, he collected Arabic, Armenian and Judaica materials. “In China, the Arabs mostly settled in Guangzhou, Shanghai and Beijing. There's probably at least a dozen different Arabic magazines published in China today — there's a Sudanese community, a Moroccan community, Syrians and lots of Yemenis.”

Adding to this multicultural adventure, Hirsch journeyed to Harbin, China, with a student from the Republic of Armenia who was studying in China and a young Chinese man who had completed his Ph.D. in Armenian studies at UCLA. 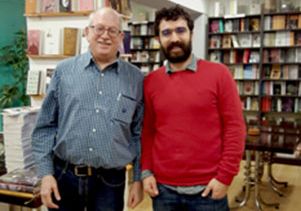 Courtesy of David Hirsch
David Hirsch and a friend at a Kurdish bookstore in Istanbul.

Hirsch’s contribution to building the UCLA collection in Middle East studies — now one of the finest in the United States — has made him a revered figure among UCLA scholars, graduate students and research centers such as the Center for Near Eastern Studies, the Center for Middle East Development and the Alan D. Leve Center for Jewish Studies. The depth and breadth of the collection are among the chief reasons why UCLA is able to attract and retain so many experts on the region, together with graduate students who want to study here and scholars from other institutions who do research here.

To help scholars, Hirsch provides an astounding array of highly useful online research guides for the regions for which he is responsible.

One program that has produced a great deal of novel content for the collection is the UCLA International Digital Ephemera Project. Among the items that have been digitized, assigned metadata and posted online are 700 flyers, newspapers, announcements and other documents that were found around Tahrir Square during the 2011 revolution in Egypt. And there are videos of demonstrations as well as documents related to the Iranian Green Movement that became synonymous with protests that began after the contested 2009 elections in Iran.

Yet, his work is never done, says Hirsch, who traveled to Iraq in December and went back last month to visit the Shi’ia holy cities of Najaf, Karbala and Kufa. He’s hoping to go to Turkey sometime this spring.

“Basically, the world is my oyster: There's almost no place you can go where you don't find either Arabs, Iranians, Armenians or Jews.”

To read the complete story, go to this International Institute website.