When Gabriela López underwent open-heart surgery at age 12, no one prepared her for the agonizing pain she would suffer afterward. Once she awoke from anesthesia, she was terrified to see a thick tube protruding from her chest and to feel staples under her skin.

None of her surgeons had explained the procedure in Spanish to her parents, who had immigrated from Mexico City. López, who was born in the U.S., often served as her parents’ translator.

That experience propelled López, now 31, to pursue a career in medicine. The new graduate of the David Geffen School of Medicine at UCLA is eager to become a pediatrician who understands Latino culture and can speak to her young patients and their parents in Spanish.

When her UCLA classmates chose López to deliver the student speech at commencement, she embraced the opportunity to represent the most ethnically diverse class in the school’s history.

On June 4, López sat at her family’s kitchen table in her cap and gown, took a deep breath and gazed into her laptop monitor during the livestreamed ceremony.

“I would like to honor our families who speak Spanish and thank them for their unwavering faith,” she said.

In Spanish, López continued to address the parents in the audience, as her own mother and father wiped tears from their eyes.

“For our parents, thank you for sacrificing your dreams to let ours come true. You left your home countries, and you clipped your wings to let us fly.”

Her speech sparked a warm reunion with KVEA-TV correspondent Azalea Iñiguez, who had covered an earlier commencement address by López — the one she gave at her 2008 graduation from San Pedro High School. Iniguez used the opportunity to update viewers on López’s story 13 years later.

“I had never heard anyone speak Spanish at a graduation before,” López said. “For me, it was very important to give the speech in my parents’ language, to have them understand the message.”

The moment was especially sweet for her father, Jorge López, who works as a janitor at Harbor–UCLA Medical Center — the same place Gabriela completed her clinical rotation in pediatrics.

“Nadie me cree que siendo yo un barrendero, tenga una hija doctora,” he told La Opinión. (“Nobody believes that I, being a cleaner, have a daughter who’s a doctor.”) 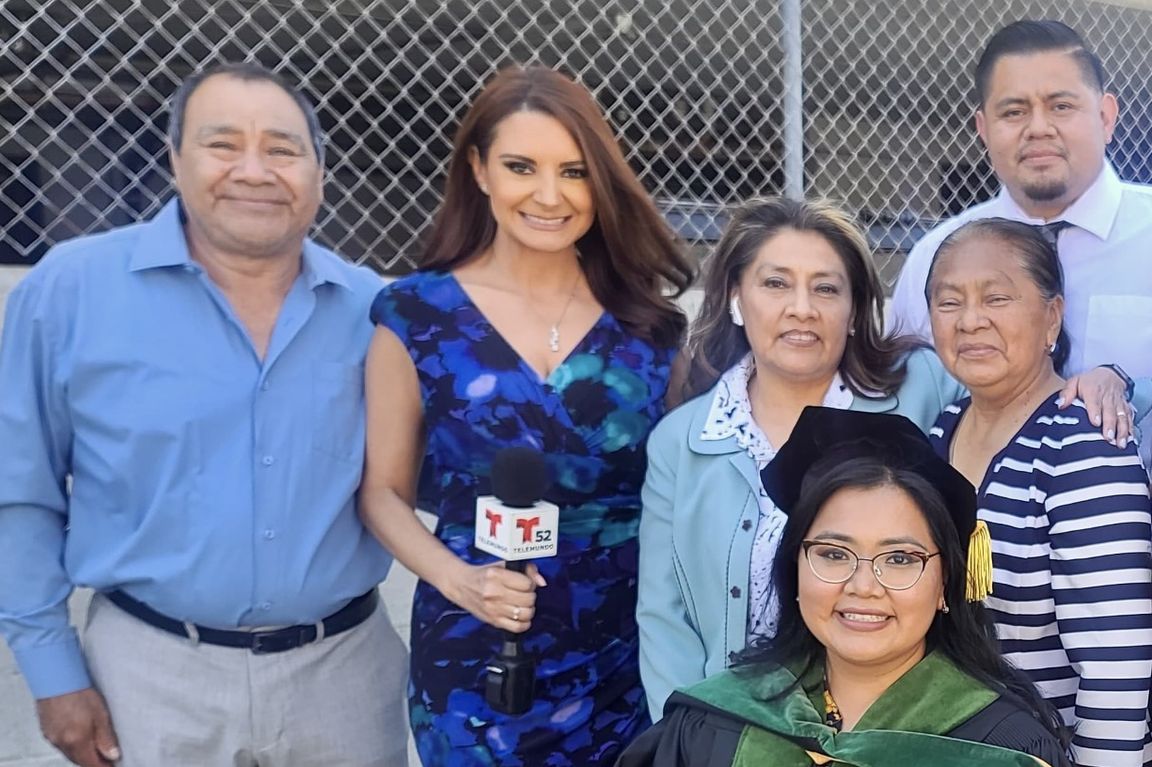 Courtesy of the López family
Gabriela López (seated) and her family reunite with KVEA-TV’s Azalea Iniguez.

Jorge López and his wife, Esperanza, left Mexico in the mid-1980s to give Gabriela and her brother, Israel, a better future through education.

“Yo siempre le dije a mis hijos que su padre y yo habíamos venido a este país porque queríamos que fueran más que nosotros, pero que tenían que ganárselo por ellos mismos,” Esperanza López told La Opinión. (“I always told my children that their father and I came to this country because we wanted them to be more than us. But they had to earn it for themselves.”)

Esperanza took a job as a cafeteria worker at San Pedro High to keep an eye on her children and ensure that they were staying on track for higher education. When Gabriela graduated with honors, her mother’s coworkers raised $1,000 to cover her daughter’s first year at El Camino College.

With Pell grants, scholarships and loans, López cobbled together enough money to transfer to Loyola Marymount University, where she went on to earn degrees in biology and Spanish before completing her post-baccalaureate work at UCLA.

López worked as a substitute teacher at her high school alma mater for two years, saving her earnings to pay for medical school at UCLA. After her second year at the Geffen School of Medicine, she returned to LMU for a master’s degree in health care systems engineering, which taught her the operational side of running a hospital. And then it was back to UCLA for the final two years of earning her M.D.

Now, López is excited to launch her residency this month at UCLA Mattel Children’s Hospital, where she will pursue a fellowship in child abuse pediatrics.

“I’ve always been told I have a loud voice,” she said. “I plan to use it to advocate for children.”