The clock was ticking. On Tuesday, UCLA graduate students had just three brief minutes each to summarize their years of research to a panel of judges.

Engaged in wide-ranging research that could help cure night blindness, enable NASA to communicate more reliably with the Mars Rover or prevent oil pipelines from cracking, UCLA graduate students are doing amazing work. But for these students, dazzling the judges with their research wasn’t enough. They had to put on a show.

They were competing in a Royce Hall conference room in the semifinal round of UCLA’s first Grad Slam, a competition where grad students essentially turn their dissertation into a three-minute TED talk that’s brief, scintillating and, above all, accessible to people outside their field. Grad Slam is part of an ongoing effort at UCLA and other universities to teach grad students how to switch back and forth between the jargon of their discipline and the plain English they need to communicate with everyone else.

For Jean Paul Santos, an electrical engineering graduate student at UCLA who ended up being chosen as one of six finalists, that meant turning his research aimed at building better antennas into a story about his fascination with space exploration as a child and his work that could help NASA receive fewer “dropped calls” from outer space.

“NASA scientists will no longer have to ask the Mars Rover, ‘Can you hear me now?’” Santos joked to enliven his presentation. 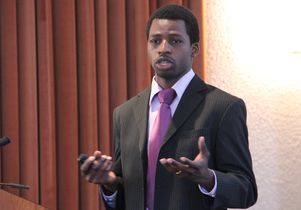 UCLA’s Graduate Division and Graduate Student Association teamed up to host UCLA’s first Grad Slam, which a handful of other UC campuses have already held. At UCLA’s Grad Slam grand finale on Thursday, the original field of 100 students will be down to six finalists, who will give their TED-style talks to judges and an audience at Pauley Pavilion's Pavilion Club. The UCLA winner will receive a $3,000 stipend and the chance to represent Bruins at the UC-wide Grad Slam in Oakland on May 4. Other students who place in the UCLA event on Thursday will win $2,000 for second place and $1,000 for third place. An audience-choice winner will receive a $500 stipend.

At Tuesday’s semifinal, the students were in top form. Sarah Hersman, studying neuroscience and psychology, talked about a chemical in the brain she had isolated in experiments to study how fear can strengthen memory. Her work, she explained, could help treat post-traumatic stress disorder. Yean Eric Lee from mechanical engineering explained how he was harnessing static electricity to create a wearable tape that could someday charge a cell phone. And Lauren Sherman explained how she determined, through MRIs, that teenagers respond differently to the same photos posted on Instagram, depending on whether the photos had more likes or not.

“Now that we know how these likes are represented in the brain … can we predict which teens are more likely to give in to peer pressure?” she asked the judges.

“Being able to communicate clearly with a variety of audiences is an important job skill, whether these students go on to become professors teaching intro classes, or become professionals outside of academia,” said Sonya Gavin, organizer of the competition and director of external relations for the Graduate Division. “The Grad Slam training workshops and competition foster the students’ abilities to articulate their research in clear and engaging ways, all while highlighting the real-world impact of their work.”

To hone graduate students’ ability to deliver a TED-style talk, the social sciences division of the UCLA College began last year offering Dissertation Launchpad, a 10-week program that teaches students ways to translate their academic vocabulary for outsiders. The program, which was repeated this year, was conceived and led by Dean of Social Sciences Alessandro Duranti, Distinguished Professor of Anthropology, in partnership with Associate Dean for Research and Innovation James Stigler, a professor of psychology.

“We want to make graduate students bilingual,” Duranti explained when the program was formed. “They get plenty of training in the important skills of speaking and writing academically, but the more they learn that, the further they get from the way they should talk with somebody they’re sitting next to on an airplane or at a dinner party. If you’re doing interesting work, you’ve got to be able to talk about it rather than say, ‘Well, just read my book.’”

To help Grad Slam contestants let go of their specialized vocabularies, coaching workshops were offered by UCLA comparative literature grad student Allison Collins, who was a finalist in a similar competition when she attended New York University. At one workshop, she asked students why they were participating — aside from winning the prize money, of course.

“To practice public speaking and prepare for conferences,” one student volunteered.

“For the job market,” said another.

“Because getting someone excited about science, especially someone who isn’t interested, is a really cool feeling,” said a third.

The Grad Slam participants also had questions. How do you know which details are too specific? Is it okay to explain a few key terms? Should you explain why the research is important to you personally or to society? Should you memorize your talk or work from notes?

Collins had the answers. Jargon and details “are not your friend,” she said. Explaining more than five terms or getting into intricate methodological details means the speech is getting too narrow and “it’s time to zoom out” on big-picture details, Collins added. And when in doubt: “Short words. Short phrases.”

“Remember — you are explaining why your work matters to others — not why it matters to you or your field,” she said. “Think of your talk as a story with a beginning, middle and end, and try to tie the ending back to the beginning … You have to answer the question, why should everyone else care about what you already care about?”