When UCLA hosted the Special Olympic World Games this summer, a positive message of inclusion and acceptance was amplified. But unfortunately for many people with intellectual and developmental disabilities in other parts of the world, this message doesn’t resonate in their countries, where there are no pathways for them to learn work and social skills or gain independence.

Thanks to UCLA student Grant Guess, however, a group of schoolchildren with disabilities in West Africa are reaping the financial and social benefits of working on sustainable farm projects that he has developed for them over the last two years.

Generally speaking, Guess said, children with disabilities in West Africa are overwhelmingly neglected, abused and discriminated against. “They are often left to sit inside their home all day to avoid public shame, are rarely enrolled in school and, in extreme cases, are killed,” he said. 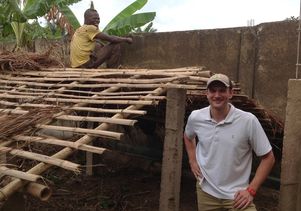 Théo Betevi
Grant Guess stands next to a shelter that he and some new Togolese friends have been building this summer for the cultivation of snails at l'Envol Kpalimé.

With funding from the UCLA Global Citizens Fellowship and the Strauss Scholarship Foundation, Guess, who will be entering his senior year this fall, traveled back to Kpalimé, Togo, last month to help the school, known as l’Envol Kpalimé, expand its agricultural enterprises. This is the second summer Guess has spent working to develop an agri-business at the school, which serves 47 young people, ages 4-18, who have conditions ranging from Asperger’s and autism to cerebral palsy and brain damage.

The Kentucky-born global studies major launched Project Kpalimé in 2014 by raising more than $14,000 online to help staff and students at the school establish a farm to breed, raise and sell grass-cutters to local markets and restaurants. These are small mammals, similar to groundhogs, that are widely hunted in the wild and eaten in Togo.

The grass-cutters, along with chickens and rabbits, have since become part of a growing agricultural business at the school. The animals are raised and sold to restaurants. This year, four crocodiles were added to the farm to attract the public and school groups willing to pay to see them.

Profits from Guess’ projects, which represent roughly one-quarter of the school’s monthly costs, are used to pay for transportation for students, Internet and phone service; feed for the farm animals; and breakfast and lunch for the students. These costs total more than $690 per month, said Théo Betevi, the school’s director.

“Meeting Grant could not have given us more joy because he arrived at a crucial moment of life at our center,” said Betevi. Since Guess started his projects, student enrollment has grown from 35 to nearly 50. “This is someone who quickly integrated himself in the social reality of Togo and is very aware of the problems of others, especially our children with special needs.”

The growth of the school, Guess said, “is a testament to what’s been going on with their existing sustainable farming projects and the new grass-cutter farm, and being able to finance more students. People are seeing successes happening at the school.” With a staff of a director, three teachers and staff of seven, including an employee who was abandoned by his family because of his cerebral palsy, the school is advanced for the region, he explained.

To accomplish all he has, there have been plenty of challenges and problems to untangle. But Guess is very tenacious, said UCLA French and Francophone studies professor Laurence Denie-Higney, who had Guess in class as a freshman and served as advisor for his projects. “He never gives up. When there is an obstacle, he doesn’t get discouraged; he just looks for a solution.”

The motivating force behind his work is undoubtedly his sister, Emily, 24, who was severely brain-damaged at birth and has a number of intellectual and developmental disabilities. The school was not his first service project. A longtime Special Olympics volunteer in Kentucky, Guess wrote grants and helped market and promote the Special Olympics at UCLA as an intern.

“Commercial farming of the African giant land snail has developed into an extremely lucrative industry over the past 20 years,” said Guess. The oversized mollusks have been called “Ghana’s new gold” by CCTV in Africa and hailed as “the next big thing” by CNN International.

“This will significantly reduce our dependence on outside funding sources,” said Betevi, adding that Guess is the first American student to ever work with the school.

Beyond creating a sustainable source of income for the school, these projects support independence and freedom in more invaluable ways, Guess said.

“They give the children at this school an opportunity to come out to the farm and work alongside the staff, learn basic skills, develop a sense of responsibility and be empowered,” said Guess, who will return to L.A. for fall quarter.

UCLA junior Abby Lewis, who is majoring in international development and minoring in French, arrived at the school Sept. 2 to work until December. Lewis, who has worked with children with special needs for more than 10 years, said Guess is one of the most driven, thoughtful people she has ever met.

“The tangible passion that he has funneled into Project Kpalimé has no end, and the innovation he displays is truly incredible,” she said. “I'm extremely humbled by what he has accomplished in Togo. ... He has created something truly special in Kpalimé, which has made a palpable impact on the lives of many.”