Some 200 UCLA medical students in the Class of 2016 received their M.D.s Friday in Perloff Courtyard during the Hippocratic Oath Ceremony for the David Geffen School of Medicine at UCLA.

“Today represents thousands of hours of studying in the graduate reading room,” said U.S. Surgeon General Vivek Murthy, who spoke to graduates as their commencement speaker. “It represents the culmination of countless exams and the consumption of dangerously high dosages of caffeinated beverages.” 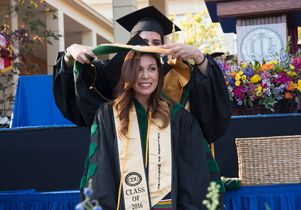 Julianne Backmann/UCLA
Rebecca Lopez, 37, smiles as she receives her hood. A single mother, Lopez survived childhood abuse, parenthood at age 14 and an abusive and violent marriage to raise three daughters and achieve her dream of becoming a doctor.

To the sea of black-robed graduates, Murthy said, “While I wish so many good things for you on this graduation day, what I wish for you more than anything else is that you live a connected life,” … not in terms of Instagram, Facebook and GPS on cellphones, he said, but in the enriching personal connections they will form with friends, patients, colleagues … “connections that will inspire you to feel kinship for people around the country and the world.”

Amidst the waves of applause and cheers for their parents, spouses, supporters and faculty members, Dr. Kelsey Martin, interim dean of the David Geffen School of Medicine at UCLA, called for a moment of silence in remembrance of the victims of last week’s shooting. “This tragedy reminds us of the fear and violence that plague our world, and the need now more than ever to address the human and societal ills that give rise to violence.”

In the crowd of jubilant graduates was a happy Rebecca Lopez, 37, a single mother who survived childhood abuse, parenthood at age 14 and an abusive and  violent marriage to raise three daughters and achieve her dream of becoming a doctor. A decade ago, she entered UCLA, intent on succeeding in medical school. Her project for a fellowship grant helped pregnant girls in East Los Angeles prepare for motherhood and drew heavily on her own life experiences. Her goal now is to complete a residency in family medicine and inspire teen girls to overcome whatever obstacles life throws in their way.

Also graduating Friday were Luz Corona Gomez, a medical student who helped her farmworker parents pick grapes in the San Joaquin Valley, and Frank Hebroni, a 28-year-old survivor of three bouts of cancer. Hebroni, who became visually impaired at age 9 because of sarcoma in his right eye, also overcame acute myeloid leukemia twice. The disease forced him to take a three-year leave from medical school.

Celebrating at their commencement ceremony Sunday at Royce Hall were 128 UCLA School of Dentistry graduates. The graduates, their guests and faculty members heard UCLA Chancellor Gene Block give a heartfelt commencement speech at the school’s 49th commencement before 107 D.D.S. degrees and 16 M.S. degrees and five Ph.D.s in oral biology were conferred.