Elwin Victor Svenson, who served in a number of UCLA senior management positions — including vice chancellor for institutional relations from 1975 until his retirement in 1991 — died at age 91 in Sherman Oaks, California, on Dec. 21 following an extended illness.

Svenson worked for the Ford Foundation’s Fund for Adult Education from 1952 to 1957 before returning to UCLA to work at UCLA Extension from 1957 through 1966. From 1961 through 1966, he served as the director of the UCLA Peace Corps Training Program at UCLA Extension. Approximately 10 percent of all U.S. citizens participating in the Peace Corps program during that time were trained at UCLA. 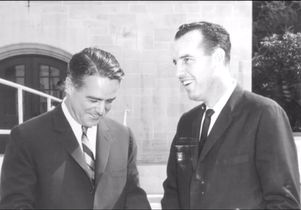 From 1966 to 1970, Svenson served as coordinator of UCLA Overseas Programs, where one of his achievements was establishing the University of Chile–University of California Cooperative Program.

In 1970, UCLA Chancellor Charles E. Young appointed Svenson assistant chancellor–executive assistant, which brought him onto the UCLA central executive management team. In 1975, Svenson was named vice chancellor for institutional relations, a position he held until 1991, when he retired from full-time employment.

Svenson’s responsibilities as vice chancellor included continuing coordination of UCLA’s international programs, which led to a wide range of affiliation agreements with universities in Africa, South America, Europe and Asia. He coordinated and led the first UCLA faculty contingent to China in January 1979 following the normalization of relations between the U.S. and China.

Young, who served as UCLA’s chancellor from 1968 to 1997 and began his UCLA administrative career in the Office of the Chancellor in 1960, recalled that the campus community at large used the nickname “Sven” to refer to Svenson.

“My professional experiences with Sven began in the early 1960s with his work on various international projects, including the very early years of the Peace Corps and continued over the years with his special efforts for the performing arts programs, intercollegiate athletic programs and international studies programs at UCLA, as well as our governmental relations and media relations efforts in the first decade of my time as Chancellor,” Young said. “We worked together on many projects and traveled to many places around the world. But, most of all, he was the dearest friend that I could have had for nearly 60 years.

“My last visit with him, shortly after Thanksgiving, was a memory I will cherish for a long, long time. I will miss him beyond measure.”

As vice chancellor, Svenson also managed the department of intercollegiate athletics, and he was a key member of the executive management group in 1982 that moved UCLA football’s home games from the Los Angeles Memorial Coliseum to the Rose Bowl. He also oversaw the first major expansion of the athletic department’s administrative and athletic training facilities, which were completed in 1983.

Svenson also oversaw UCLA Center for the Performing Arts programs, which continued UCLA’s long tradition of bringing a wide range of music, dance and theater to both the campus and Los Angeles region. In 1979, he oversaw the consolidation of the campus’s varied ticket offices into the Central Ticket Office, in order to provide one-stop service for tickets to athletics, performing arts and student activities programs. 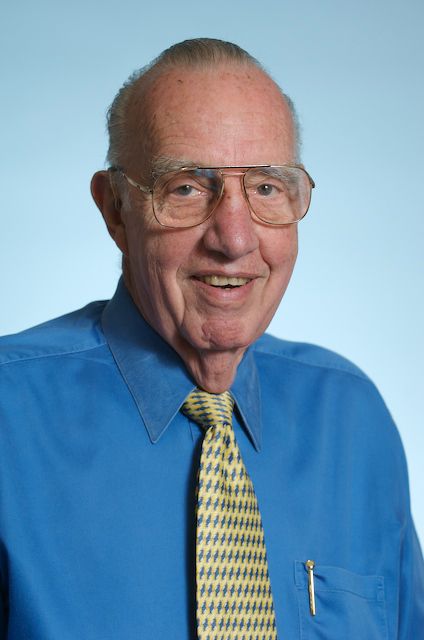 Svenson also had a keen interest in ethnic art, and he assumed responsibility for the UCLA Museum of Cultural History, which had been established by then-Chancellor Franklin Murphy in 1963 and was housed in the basement of a campus academic building. Svenson conceived a new, separate building for the museum and led the capital fundraising campaign that financed the construction of the Fowler Museum building, which opened in 1992.

“The Fowler Museum building would never have been constructed had it not been for Sven’s unique efforts in the late 1980s,” Young said.

Following his retirement in 1991, Svenson undertook a part-time appointment in the Anderson Graduate School of Management (now the UCLA Anderson School of Management) as executive director of the Global Access Program for the Fully Employed MBA program. In that capacity, he facilitated the identification of global companies for internships and special assignments for students enrolled in the FEMBA program. In December 2004, the government of Finland named Svenson a Knight, First Class, of the Order of the White Rose, in recognition of his efforts with and on behalf of a wide array of Finnish companies.

A resident of Sherman Oaks since 1958, Svenson was preceded in death by his wife of nearly 60 years, Pauline (Polly), who died in 2008. Polly participated in several UCLA support groups, and she shared her husband’s interest in the Fowler Museum by serving as volunteer director of the museum’s gift shop for many years.

Svenson is survived by his four children: Paul (with his wife, Wendy), Ann, David (with his wife, Lori), and Karen; and five grandchildren, Jeremy (with his partner, Khoi), Kirsten (with her husband, Mike), James, Hamish and Jade.

The family issued the following statement:

“For all of the considerable professional accomplishments of our father, they must be viewed in the context of the man himself. He was a loving husband, father, grandfather, attentive friend, thoughtful colleague and wise mentor. For those pulled into his orbit, he was consistent in his attention. He saw the world through a unique lens, with clarity of perception that reshaped prior perspectives. He humanized large bureaucracies and taught others navigation skills within a framework of highly complex organizations and competing interests. His diplomatic skills were of the highest order. He believed in others and believed in himself.

“His voice was a calling card — deep, rattling, distinctive. He never lost his temper. He was a gentleman and a deep romantic. He was well traveled and welcomed by a diversity of world cultures. Notable for his tall stature and sartorial style, made unique especially by his shoes and ties, he loved good food, ethnic and modern art, music, opera, giving valentine candy, telling stories, his family, his friends, his colleagues, teaching others, listening well and building things — relationships, programs, buildings. He was an outstanding human being whose life well lived served as an example for so many.”

Services will be private. A memorial service is being planned at the UCLA Anderson School of Management.

Guts and brains: How microbes in a mother’s intestines affect fetal neurodevelopment