Johanna Drucker, Breslauer Professor of Bibliographical Studies in the department of information studies, is internationally known for her work in the history of graphic design, typography, experimental poetry, fine art and digital humanities.

What was your motivation for writing "Downdrift"? Is there something in particular you wanted to highlight?

“Downdrift” is a story about species changing under ecological pressures. We tend to think of animals as relatively stable — pigs are pigs and hawks behave like hawks have always done. But in fact, animals are evolving rapidly, particularly in certain populations. This is documented by animal behaviorists and biologists. I was interested in writing about this from an imaginative point of view. The concept of “downdrift” refers to the “seepage” of human traits into animal behaviors. The story is narrated by an archaeon — the oldest living species on Earth, which dates back about 3.8 billion years. They were only discovered in the 1970s, and they helped restructure the tree of life because of their unique characteristics. But the action in the story is driven by communication between a cat and a lion — as the cat realizes her familiar world is altering and the lion, bewildered by the changes in his habitat and the animals around him, tries to understand the alterations of the natural world. The book is very melancholy, as the ecological pressures are rapid and seem irreversible. The archaeon has a distributed consciousness — like a fungus — and so can witness events in multiple places simultaneously. The contrast of individual sentience and distributed intelligence is another subtheme in the book.

Distributed consciousness is a condition of shared awareness across a population of living entities. The single-celled organisms that make up fungi, for instance, can act in unison when necessary for the survival of the organism. They will retreat from danger in a coordinated motion, as if they were a single living thing. The consciousness of a bird swarm, flying in careful patterns, has a distributed awareness — each member of the group is both individually aware and also part of a larger pattern of thought. In a networked environment for automated sensing, awareness — the ability to process signals and respond — is frequently distributed, rather than central. This makes the network more robust, and less vulnerable, since the system can compensate for loss or error in a single node. Though we might not characterize a computer network as having “sentience” or the capacity for self-reflexive thought, it has awareness in its feedback mechanisms and processing capacities. If we define consciousness as simple awareness, then these automated systems possess a distributed consciousness. But in my work, I am interested in systems of living beings — humans, animals, plants, and microorganisms — and the tension between awareness located in one entity or individual and a consciousness that emerges from the aggregate of all participants in the system. 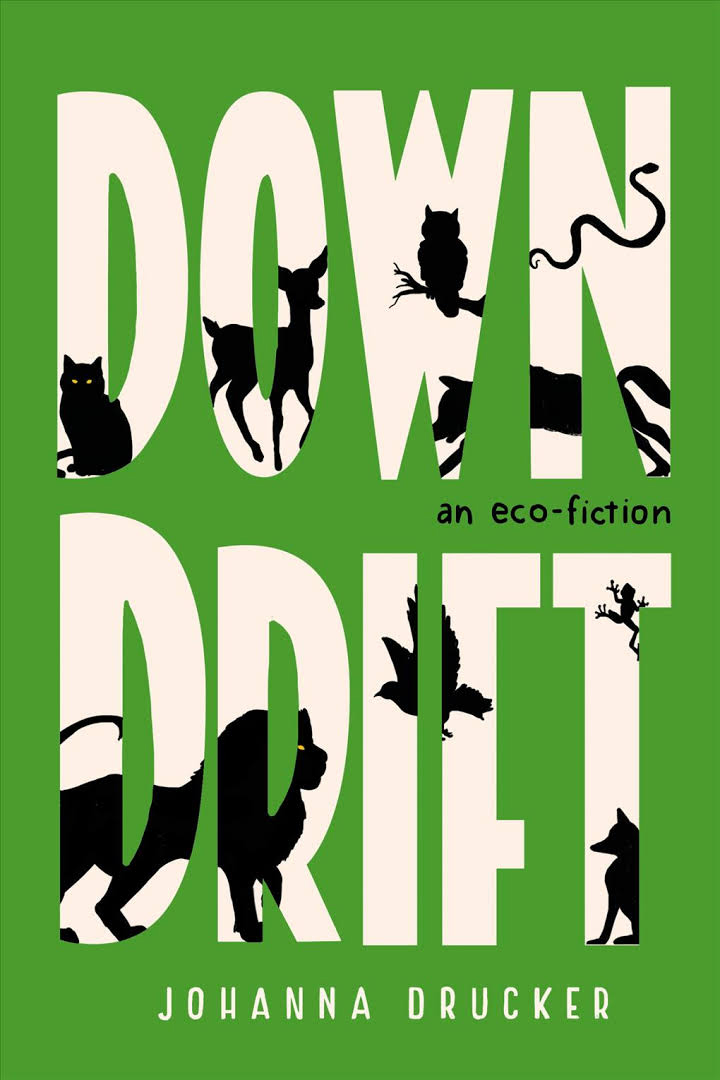 What was the inspiration behind using some avant-garde symbols/characters like squirrels that knit or rats that go to parties in metallic leisure wear?

I wanted to have fun with the imagery of the animals, so I imagined each fulfilling its individual character by taking up a particular version of human influence. The image of rats in disco clothing, for instance, seemed very funny to me, as did the idea of a young hawk fledgling getting punked out and pierced to annoy his parents. The images just came to me spontaneously ­— as in the case of the pig orator spouting wisdom from the classic, Porcine Sense.

From some preliminary searching, it appears as though “Downdrift” is your first foray into fiction. What was your motivation to use fiction as your main medium?

I have actually written quite a few fiction books. Most recently, “Dark Decade,” “A Girl's Life,” and other limited edition artist's books. I started writing fiction as a child, and still have all the manuscripts of the novels I wrote as an adolescent. The difference is that this book is being published by a higher-profile press. It is also a very readable and, hopefully, accessible book ­— thanks to the work of the wonderful editor, Constance Renfrow, who worked hard on the project. Three Rooms Press has been very supportive and I hope the book can find an audience.

How do you think “Downdrift” is relevant to the socio-political climate today?

I hope the project will be one of many books in eco-fiction that raise awareness about the precarity of our situation, the preciousness of other species, and the risks to life as we know it that are posed by human behaviors. I am also interested in bringing attention to the idea of distributed intelligence as an alternative to the model of sentience that is linked to what we call “human exceptionalism” — the notion that only humans possess capacities of awareness and intellectual processing. Animals have interior lives, and emotions, but other lifeforms have abilities that are radically different in their organization and operation.

How does “Downdrift” relate to some of your past work with the digital humanities?

I have been arguing for some time about distributed systems, forms of sentience and awareness that are not modeled on autonomous individuals. I wrote a book in 1990, “Simulant Portrait”, and another in 1994, “Otherspace: Martian Ty/opography,” and one in 1998, “Emerging Sentience,” that all touched on these topics of alternative approaches to sentience. I’ve also been writing about these ideas in the context of changes in literary production and the end of the individual voice. So, though “Downdrift” does not touch directly on digital humanities, it does address the capacities of distributed systems in ways that are relevant to networks and communications.

What do you hope people will take away from “Downdrift”?

I would want them to enjoy the perspective of the archaeon, the tales of the animals, and reconsider the assumptions we have about human exceptionalism.

People are invited to attend a reading and signing on April 26 in the Moore Hall Reading Room at 5:30 p.m. Light refreshments will be served.